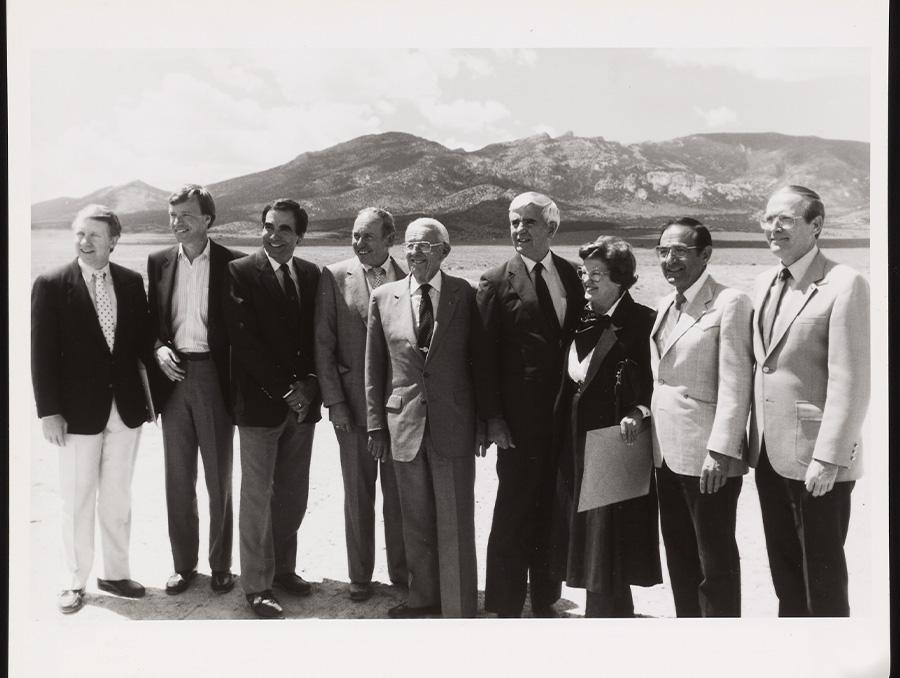 My second blog post marks a special occasion. Today, December 2nd, is Senator Reid’s eighty-first birthday. In honor of the Senator, I would like to explore one of his most lasting accomplishments and my experience in researching it.

For the first time, I had the opportunity to visit the University of Nevada, Reno’s Special Collection and University Archives a few weeks ago. As I leafed through a small part of Senator Reid’s collection, I was struck by the immensity of the records he kept. Each box of materials contained a detailed record of communications with members of Congress, notes from strategic meetings outlining approaches to legislation and the back-and-forth negotiations that went into passing multiple pieces of landmark legislation. One that stands out for Nevada and Nevadans is the 1986 Great Basin National Park Act which established Great Basin National Park—Nevada’s first National Park. Something that “Congressman Reid pursued the worthwhile endeavor of creating… before it was politically popular to do so.”[1]

Archival materials reveal that the road to this legislation was long. The act emerged from the Nevada Wilderness Protection Act of 1986, first proposed by Harry Reid in September of 1985. This act, proposed by then Congressman Harry Reid, set aside wilderness areas to be protected by the federal government. One of these areas, Wheeler Peak, showed immense potential for a national park. Wheeler Peak accurately captured the geographic and biological diversity of the Great Basin Region; a region that, at over 200,000 square miles, covers a large portion of the Western United States. This, along with the bristlecone pines (which are the oldest living things on Earth), made the area a priority to protect. With the help of Representative Bruce Vento (D-MN) of the House Public Lands Subcommittee, Representative Reid introduced and passed Great Basin National Park in the House of Representatives which designated a 129,000 acre park. However, his efforts were undercut by Nevada Senators Chic Hecht and Paul Laxalt who slashed the park’s area to a mere 44,000 acres—an acreage which the National Park Service’s study of the area deemed the lowest possible size for a park at Wheeler Peak. Besides political differences with Representative Reid, both Hecht and Laxalt were concerned that a larger park would eliminate the grazing, hunting, fishing and mining rights that Nevadans valued.

Clear in Reid’s archival papers is his tenacious fight for a larger park. In a statement before Senate subcommittees considering the boundaries of the park, Representative Reid declared, “[t]here is no point in creating a national park if the unique features of the area are not included within the park’s boundaries.”[2] These excluded features, such as the bristlecone pines, were an important facet of the proposed park. In the archives there are countless communications from Reid urging Senator Hecht and Senator Laxalt to consider a larger park. Reid argued that by gutting the park they put its creation in jeopardy; something that would be a huge blow to their shared home state of Nevada. Harry Reid’s advocacy drew the attention of Representative Vento who lauded Reid’s “good faith efforts to work out a compromise in this matter [which has] been tireless.”[3] It was his industrious and spirited efforts to negotiate which swayed Senator Laxalt and eventually Senator Hecht to compromise to a larger, 77,000 acre park, which included usufruct rights for Nevadans. The Great Basin National Park Act of 1986 was signed into law by President Reagan on October 27, 1986—officially creating Great Basin National Park.

Great Basin National Park stands today as an exemplary presentation of the beauty and serenity of Nevada and the West. The park outside of Ely, Nevada sees hundreds of thousands of visitors annually. These travelers come to explore the Lehman Caves, hike Wheeler Peak, stargaze, see bristlecone pines, take in a biological diversity that rivals the Galapagos Islands and scan the vast beauty of the Great Basin region which makes up a majority of Nevada and a part of Utah, Idaho, Oregon and California.

The Great Basin National Park Act established an important precedent of land management in Nevada. Notably, the act balanced the needs of tourists, ranchers, sports enthusiasts and economic interests. These rights were all maintained in the legislation and Reid and his staff collaborated with Nevadans and Senators Hecht and Laxalt to ensure that a truly multi-use park was created. The practice of balancing the complex and often contradictory interests of diverse groups was essential for Western environmentalism to succeed. Congressman Reid recognized that, in order to protect public lands, there must be recognition of the ways in which people use that land. This balancing act would be an experience which Harry Reid would time and time again be required to execute in order to conserve the environment.

The park's establishment struggle, shown in Senator Reid’s archival papers, demonstrates a small sample of what is contained in his collection. Decades of materials regarding his many accomplishments and the lengths that he and his staff went to reveal much about the history of Nevada, the West and the United States. This treasure trove will be an important source for historians and the public for years to come. For more information about his collection, visit Special Collection and University Archives.

A special thanks to Ian McGlory and the Special Collections and University Archives for all of their assistance in researching for this article. To find more on Senator Reid’s environmental victories visit KCET for their latest documentary: The New West and the Politics of the Environment.