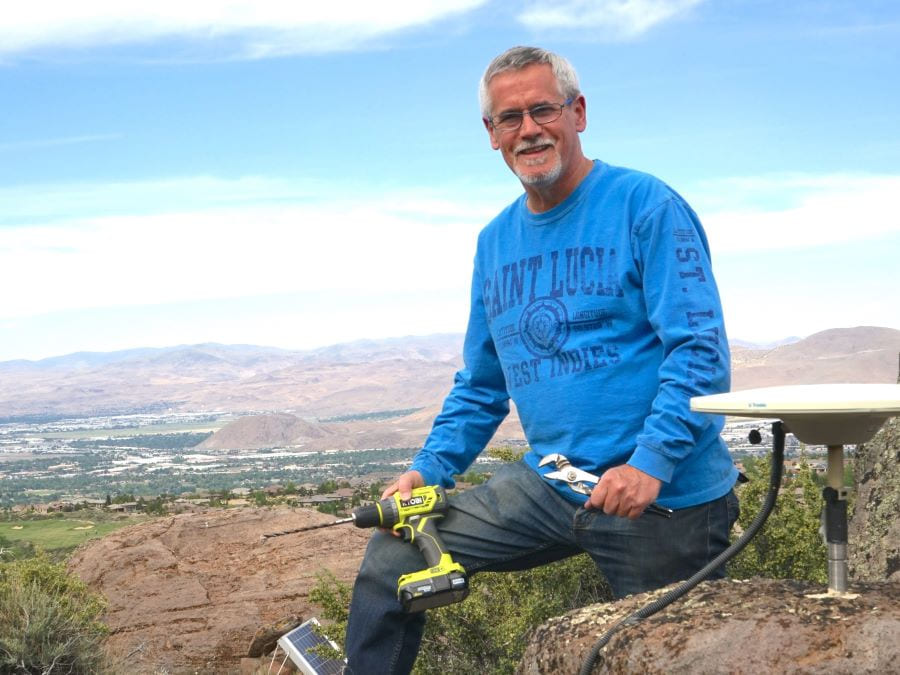 By collecting and analyzing Global Positioning System (GPS) data from stations around the world and satellites in space, Geoff Blewitt, professor of geosciences in the University of Nevada, Reno’s Nevada Bureau of Mines and Geology, is able to study changes in the Earth’s crust with great precision. The result is a series of significant discoveries, any one of which has changed scientific understanding and offers implications for the way we live and think. Considered together, they mark an impressive career and body of research.

In recognition of this broad spectrum of contribution to many fields of science and engineering, Blewitt has been named the University’s 2020 Outstanding Researcher.

A staggering amount of data

“My career has been largely based on innovative ways to analyze GPS data but also apply it to science,” said Blewitt. “We are collecting data – lots of data – processing it and making it all available for science.”

Blewitt established the Nevada Geodetic Laboratory at the University in 1999. Supported by NASA, National Science Foundation, U.S. Geological Survey and U.S. Department of Energy, the Nevada Geodetic Laboratory collects and processes data from a ground-based, multi-state network of 400 GPS stations that they have built throughout the Great Basin region, plus from another 18,000 GPS stations around the world. Data is collected from this vast network every 15 or 30 seconds.

The entire body of data is archived and freely available to the international scientific community through software systems developed by Blewitt and colleagues.

Blewitt’s work has contributed to other improvements in GPS and satellite technologies as well, including enhanced global navigation satellite systems, determination of satellite orbits, atomic clock timing and high precision positioning methodology. In addition to his software development, Blewitt is the co-inventor on three patents including two from NASA projects.

As Blewitt neared completion of his Ph.D. in physics at the California Institute of Technology (his bachelor’s degree in physics is from the University of London), he was encouraged to join the Jet Propulsion Laboratory (JPL), which is managed by Cal Tech for NASA. It was 1985 and JPL was exploring ways to apply GPS technology.

“GPS was going to be a big thing,” he said. “The Internet was in its infancy but I could see it would be big too, and GPS and the Internet together would be powerful.”

His research interest and dissertation had been in fundamental particle physics, however, said Blewitt, “I decided I’d rather develop something new and get in on the ground floor. I had to change my field and learn on the job.”

Blewitt founded and supervised JPL’s Space Geodesy and Geodynamics Systems Group, which is still thriving today. His group developed the first software to analyze GPS data and maximize its application.

After that early career turn, Blewitt continued to work in geodesy and engineering, although now, he said, “I’m going back again and doing fundamental physics.”

In collaboration with Andrei Derevianko, professor of physics and a past Outstanding Researcher awardee, Blewitt introduced the innovation of analyzing GPS data in the study and detection of dark matter.

The project grew from their shared interest and expertise in atomic clocks. Blewitt, who now has a 25 percent faculty assignment to the Department of Physics, relies on precision timing signals furnished by atomic clocks on GPS satellites. Derevianko is internationally recognized for his contributions to more accurate atomic clocks, and for his innovative theoretical ideas on using GPS clocks to search for dark matter.

Using Blewitt’s archival data from GPS satellites orbiting the earth, the two College of Science faculty members looked for dark matter clumps in the shape of walls or bubbles and which would extend far out beyond the GPS orbits, the solar system and beyond. As Derevianko described in a 2017 story, “We realized the GPS system could be used to listen to the dark matter sweeping through us.”

Their resulting article, “Search for domain wall dark matter with atomic clocks on board global positioning system satellites,” was published in Nature Communications.

Blewitt’s many awards include the Vening Meinesz Medal which he received in 2015 from the European Geosciences Union in recognition of exceptional international standing. A Fellow of the American Geophysical Union, he has published more than 100 peer-reviewed papers in high caliber journals. His work has been cited more than 12,000 times, with 4,000 citations since 2015 alone. He has been the principal investigator or co-investigator on more than 40 grant-funded projects, including 26 projects totaling more than $7.1 million over the last 10 years.

In the field of geoscientists, said Jeff Thompson, dean of the College of Science, Blewitt is “internationally known by his first name.”

“He epitomizes the concept of an exemplary scientific citizen contributing to both basic and applied innovation research,” said Jim Faulds, Nevada state geologist and director of the Nevada Bureau of Mines and Geology.

“I can’t emphasize enough – it’s true for all researchers – you can’t work in a vacuum,” Blewitt said. “When you work in scientific research, you are starting off where somebody else left off.

Conclusions and data came before you. It’s like standing on the shoulders of giants. It takes a lot of people; it takes research groups and a global community.”

Blewitt points to the International Global Navigation Satellite Systems Service, with which he has been involved since its inception in 1994. “The goal was to have everybody share data, and send it to places where you can easily find it and use it. The effort wasn’t science directed, it was cooperative and it was science enabling. We are working together and building on what’s been done before.”

Both Thompson and Faulds add another dimension to Blewitt’s list of contributions to his communities: outstanding teacher and mentor to graduate and undergraduate students. Many of his former students have gone on to highly respected positions around the world.

“He is a true university citizen,” said Thompson. “Geoff cares about what we do. He contributes as a world-class researcher, and he also engages in campus, public outreach and educating our students. He’s just remarkable.”