Eloisa Gordon-Mora talks about her first year-plus on the job, including socio-political challenges, strategic planning, professional achievements and what the future holds 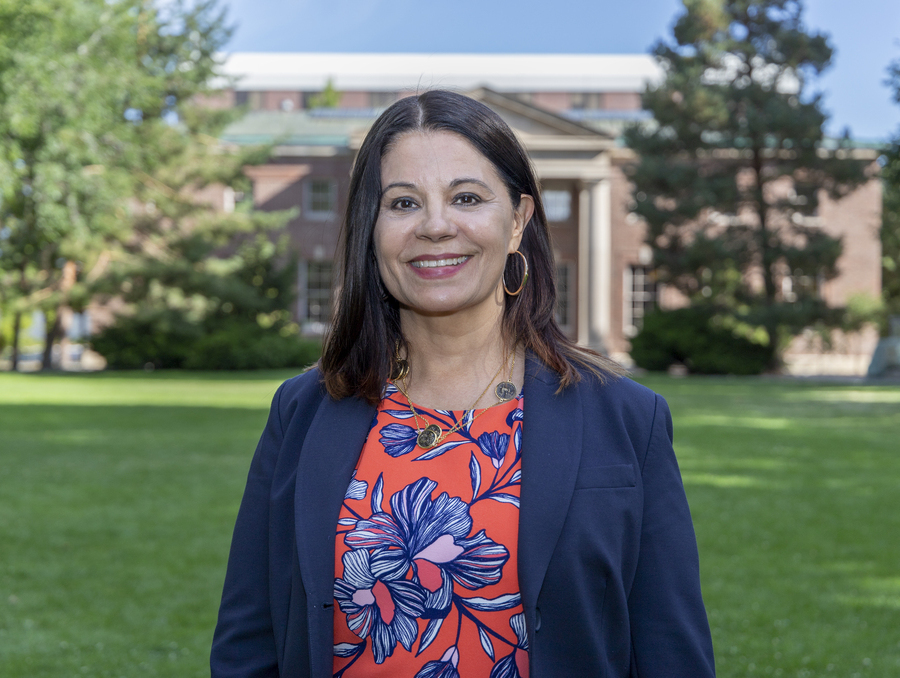 Eloisa Gordon-Mora talks about her first year-plus on the job, including socio-political challenges, strategic planning, professional achievements and what the future holds

Since her appointment as the University’s Diversity and Inclusion Officer began in June 2019, Dr. Eloisa Gordon-Mora has been busy, listening, learning, planning, writing and taking action. Her time on campus has coincided with one of the most challenging periods in the University’s 146-year history, including the COVID-19 pandemic in March 2020 followed by the events of late May when George Floyd was killed, followed by a summer and fall of racial and social justice protests and civic action. Throughout a distinguished 25-year career as a higher education administrator, political scientist and non-profit sector leader, Gordon-Mora has demonstrated she is a bridge-builder and consensus-maker on matters related to diversity, equity and inclusion. She has brought this approach to her work as the campus’ Diversity and Inclusion Officer, as she has laid the groundwork through numerous meetings and conversations with dozens of campus constituencies, as well as a campus-wide diversity and inclusion survey, to complete the University’s Strategic Plan on Diversity and Inclusion by the conclusion of the 2020-2021 academic year.

In a recent interview, Gordon-Mora took stock of her first year-plus at the University, evaluated the challenges the University has faced, and spoke about what the future holds. She expressed optimism about the forthcoming Strategic Plan on Diversity and Inclusion, which will take a comprehensive and forward-facing look at what the University will do to achieve important institutional goals for diversity, equity and inclusion. The interview also touched on several professional achievements/accolades she had recently received, including chairing the Nevada System of Higher Education’s Diversity, Equity and Inclusion Council, and a distinction from Diverse Issues in Higher Education, in which Gordon-Mora was named one of this year’s “35 Outstanding Women in Higher Education.”

Nevada Today: Eloisa, you now have been the UDIO at the University for over a year—and what a year-plus you’ve experienced. What are your thoughts looking back at the year, where we are, where we are going, and now that we are celebrating Hispanic Heritage Month?

Gordon-Mora: Well, of course, there is so much to tell and so much to address but looking back I continue to validate the need for us, as an institution, to commit to a strategic organizing mentality and practice, as the necessary route to advance the institutional values of diversity, equity and inclusion (DEI).

All the universities that have made great inroads on DEI, for example, Rutgers, Michigan, Missouri—and some of them, like the latter, following such dramatic moments as Ferguson—have been able to advance by developing: research-based, data-driven strategic planning process that is made to be accountable. I have connected collegially with the Chief Diversity Officers at these institutions, throughout the years, as well as others, and it is always the same conclusion.

With respect to the need for greater institutional accountability, overall, that is a reality that came out loud and clear in the Climate Survey findings, and that we, that is, the Office of Diversity & Inclusion, have continued to document in many ways. Our goal for the conclusion of the academic year is to have completed the first Strategic Plan on Diversity and Inclusion for the university; and this is important, not only because it is a standard for all our peer institutions, but because it seeks to address the different levels of organizational challenges that we clearly know exist. By that I mean, disparities and exclusions based on race/ethnicity, gender-identity, sexual identity, ability, social class, first generation and so forth—but also addressing how those identities impact differently and intersectionally different groups of our university community, that is, students, faculty, as well as staff.

Nevada Today: It’s very complex work. How do you go about it?

Gordon-Mora: Most certainly, it is not only extremely complex work, but it is also work that requires of extensive, inclusion, indeed; or the active and extensive involvement of groups in the planning, executing and assessing of where the University is and where it can, and should, be. That is the organizing and strategizing we have started with the academic units, Student Services, Marketing and Communications and Information Technology, and will continue this semester with Police Services, Administration and Finance and Research and Innovation. That planning and organizing also includes promoting and channeling the advocacy that is originating in the different committees and affinity groups connected to our office.

It is a common error to think of something like my office, Diversity & Inclusion, as an office that you can ‘outsource’ the problems of social exclusions, and ‘they,’ the office, should be able to ‘solve’ them. However, this could not be further from the truth, as you know. Not only are issues of racism and prejudice, marginalization, sexism, xenophobia, homophobia, injustice, centuries-old in the making, but because they impact whole groups, sectors of society, they cannot be addressed adequately by any single individual, but by groups. Our office cannot ‘solve’ the problems, but our office is committed to the facilitating and organizing on ever-evolving advancements on DEI.

This is never, however, an eventually completed task, but rather, always in the making—much like democracy. As with democracy, DEI work requires, in order to be meaningful, of what social-scientists term, ‘people’s agency,’ or collective efforts. As my thesis advisor, Guillermo O’Donnell, would state: no democrats, no democracy, meaning, in our case, we do not ‘get’ DEI, but out of our active involvement, we advance DEI.

Nevada Today: You seem to bring not only your experiences as a former academic, dean and community organizer but your concerns with ‘democracy’ into the work of D &I

Gordon-Mora: That is correct. For me having had those apparently different experiences bring together my fundamental concerns, as a political scientist, on how to advance democracy, in this case through education in an institution of higher learning, one of the more than logical contexts for such pursuits. My community work helped me to better place my academic self, that is, theory and practice. As a political scientist, I can attest that we need to better contextualize our DEI objectives, and that is, DEI is a justice pursuit, and therefore a POWER, or access to power pursuit. However, we are many times stuck in abstractions and or emotions. All societies, inclusive of governments, their institutions and organizations, have embedded values connected to their structures, as a way to sustain those power structures. When we use the term, ‘structural racism,’ for example, that is exactly what that concept is addressing: the need to address not only externalities, but the values inscribed in the structures, in the institutions that perpetuate those power arrangements that sustain exclusions. These are so embedded that oftentimes we find it difficult to identify because we mostly focus on externalities—i.e., we ‘think’ that we believe this but what is the actual practice that is sustained by the inscribed values? Those explicit understandings are what is required to move from diversity, into inclusion and equity.

Nevada Today: What are some of the challenges you have faced?

Gordon-Mora: Power narratives always imply a counter-narrative. That is partly what we are doing by documenting, through data and research-evidence, how do our DEI values actually align with the evidence. Part of what we have witnessed—i.e., faulty accountability—is precisely because values and structures are not aligned. That type of evidence, however, also needs to be advanced through social justice/ethical imperatives. One requires of the other: without passionate ethics, we have no purpose; but without, I guess, more hard evidence, we have no direction and obligation to change. Counter-narratives also imply challenges to them, by those that do not want change, ultimately. As a reflection of that, I have received my good share of what I would term ‘hateful messages’—emails, voice messages—as well as different types of resistances and scapegoating. It is solitary work, at times, so I am grateful to the team at the office and our ‘allies.’

Gordon-Mora: The work is always the most important thing. Actually, when I talk about what ‘I’ am doing, I always say ‘we’ because it always requires collaborators and allies, but since you asked, that is correct, I am also honored to be this year’s Chair of Nevada System of Higher Education’s Diversity, Equity and Inclusion Council, the committee that brings together all Chief Diversity Officers from all eight NSHE institutions. We report directly to the Board of Regents’ Cultural Diversity Committee, and, through them, to the Chancellor.

Through that connection, we have been working on how to advance DEI in a broader, state-level, including the Hispanic Serving Institution designation as well as other minority designations, including ANAPISI (Asian-American and Native American Pacific Islander Serving Institution) and MSI  (Minority Serving Institution), advancing a more concrete agenda to support Black Lives Matter, working with Indigenous communities and other communities of color, supporting disability issues, and addressing emerging concerns on gender and gender identity threats. Also, this year I was invited to be Equity Leader for NSHE at the national organization, Complete College America, as well as serve on the Advisory Board of the Northwest Commission of Colleges and Universities. If diversity work is oftentimes isolated work, I hope those connections will bring greater visibility and support to not the only the Office of Diversity and Inclusion, but to the University. Most certainly I also share that hope with my highly diverse Latinx and communities of color, especially, women of color, during this Hispanic Heritage Month.