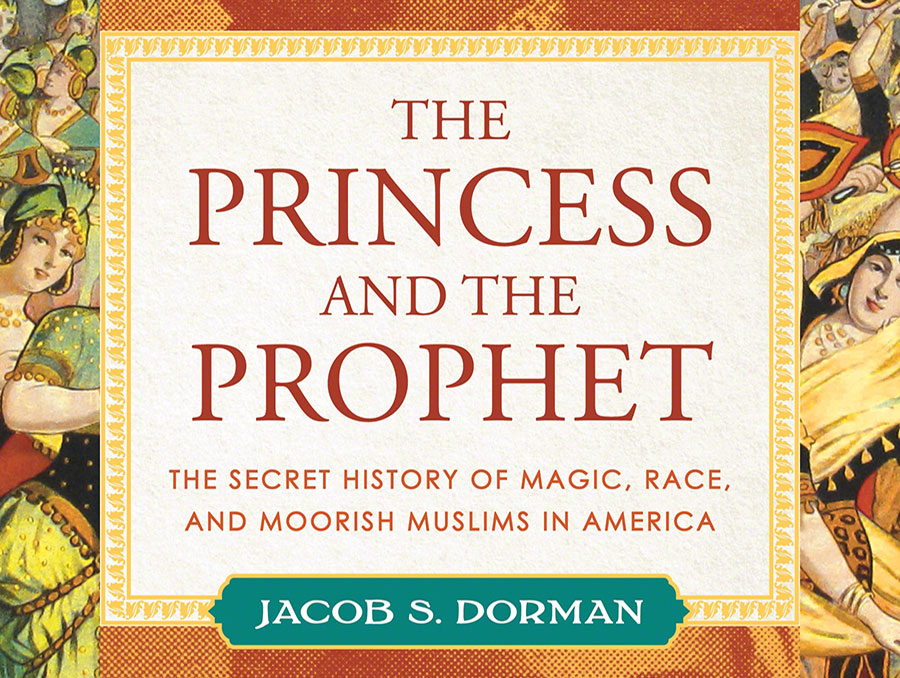 University of Nevada, Reno Associate Professor of History for the College of Liberal Arts, Jacob Dorman wrote a biography of Noble Drew Ali, who founded the first mass Muslim movement in 20th century America. This was the precursor of Black Muslim groups like the Nation of Islam of Muhammad Ali and Malcolm X. African Muslims came to the Americas as slaves; but scholars have struggled to explain why “Black Muslim” groups exploded in popularity in 1925, with Ali’s founding of the Moorish Science Temple of America.

Dorman’s book, “The Princess & the Prophet: The Secret History of Magic, Race, and Moorish Muslims in America,” demonstrates that while most know Drew Ali as “Timothy Drew” or “Thomas Drew,” born in North Carolina, the Muslim leader of Moorish America was actually born “Walter Brister” and grew up in Kentucky near Cincinnati, Ohio. Dorman investigated over a decade’s worth of research and analysis of everything from photographs to Wild West Show programs to chart Brister’s path from the first Black child star on Broadway in 1893. He examined his time as a “Hindoo” magician in the circus and his marriage to Eva Alexander, an African American lion tamer and snake dancer. After a stint as a musician in Chicago, the Bristers staged Walter Brister’s death in 1914 and he became a root doctor in the Harlem Renaissance, before reuniting with Eva Alexander to form the Moorish Science Temple in Chicago in 1925. During this time, Brister infiltrated the Chicago political machine in the age of Al Capone and made millions of dollars in today’s money from various businesses.

“The Princess and the Prophet” suggests that all cultures are similarly “polycultural,” pieced together from diverse and ever-changing sources, influenced as much by peers as by parents and grandparents and by pop culture as much as sober sacred traditions.

The book also demonstrates that Black people have a long history of embracing Islam to rebuke racism, win civil rights and assert that their lives mattered.

“The George Floyd/Black Lives Matter protests have centered on two related issues: the value of Black lives and the fact that African Americans are citizens and deserve all the protections of the state, rather than to be subjected to harassment and even murder by the police,” Dorman said. “Prophet Noble Drew Ali directly spoke to the value and sanctity of Black lives by embracing a creed that renounced racism.”

Greta de Jong, professor of history, also wrote an article recently on the history of Black people in America and their struggle to freedom. Beyond Civil Rights: Remembering and Continuing the Black Freedom Movement in the United States in “ Rethinking America’s Past: Voices from the Kinsey African American Art and History Collection,” examines some popular misconceptions in the way people understand the civil rights movement. de Jong emphasizes how participants fought for economic as well as racial justice, which is the essential role grassroots activists have taken up today. The book’s collection of articles aims to repair some of the lost historical narratives of Black culture to provide an appreciation for the conversations around racism taking place today.

In the Department of English, Associate Professor Justin Gifford is currently working on a book called “Revolution or Death: The Life of Eldridge Cleaver." Due out this fall, the biography of the late Black Panther Party leader Eldridge Cleaver details the cultural history of black radical activism in the 20th century. The book follows the Cleaver family from the days of slavery and Jim Crow through the Great Migration and civil rights movement. It is a history of one of the key figures of the Black power movement and it provides a pre-history of Black Lives Matter.

Social justice for all people of color

The Department of Anthropology’s work on indigenous social justice also can’t go unnoticed. Associate Professor Sarah Cowie and doctoral student Diane Teeman recently published “ Collaborative Archaeology at Stewart Indian School.” The book documents the archaeology and history of a local boarding school for American Indian children. Cowie and Teeman’s research highlight the spirit of children in light of government attempts to integrate Native populations at the turn of the 20th century. The authors point out how governmentality enabled decisions on the management of historical populations and social wealth.

Racism and violence – a global issue

Director of the Center for Basque Studies and Professor Xabier Irujo has written a couple of articles for Deia, a Basque newspaper, on violence and police brutality as it relates to racism and classism. In his first article Toque de queda en Reno, Irujo discusses the similarities between the U.S. police forces’ use of violence and police brutality in Europe. He criticizes the lack of self-criticism in Europe when addressing the George Floyd case and argues that police brutality, racism and classism are not American problems, but global threats.

“For instance, in Belgium, there is an ongoing debate about King Leopold II, who began colonialism in the Democratic Republic of Congo in 1885,” Associate Professor of History Charles Tshimanga-Kashama said. He explained how historians and other international experts are currently engaged in a debate about the atrocities King Leopold committed in the Congo.

Tshimanga-Kashama wrote an article in French that focuses on this topic. The article called “Déconfinons le passé colonial et ouvrons les ateliers de la mémoire en RDC” (The Colonial Past and the Workshops of Memory in DRC) draws on the work of Subaltern Studies and argues that the end of Belgian colonialism did not result in questioning Western-Eurocentric knowledge over “Third World” societies. Tshimanga-Kashama said it’s important to incorporate forgotten Congolese voices that are missing from Belgian historical accounts, including the voice of Congolese soldiers who revolted in Luluabourg in 1944 and proclaimed their desire to be free. It should also include the voices of children born to European fathers and Congolese mothers during colonization, who today must resonate at the heart of Congolese history. The voices of Congolese women, who are frequently marginalized in an account of history that privileges men, must also be incorporated.

Worldviews play an important part of unconscious bias. Weston Morrow, assistant professor of criminal justice, examines this in his article Police worldviews, unconscious bias, and their potential to contribute to racial and ethnic disparities in New York Police Department (NYPD) stops for reason of “furtive movement,” which was recently published in the “Journal of ethnicity in Criminal Justice.” Morrow helps to understand how police officers’ worldview may contribute to or interact with unconscious biases. He also examines in the article whether NYPD officers are more likely to stop Black and Hispanic New Yorkers than their White counterparts for the reason of “Furtive Movement.” Morrow’s research analyses NYPD stop-and-frisk data from 2011, 2013 and 2016.

In addition, Morrow and Associate Professor of Criminal Justice Emily Berthelot wrote an op-ed piece for the Reno Gazette-Journal identifying three priorities for police reform. Berthelot and Morrow argue that the popular “defund police” rallies are not sufficient and the elimination of law enforcement has the potential to further divide the nation. Instead, they point out that large-scale reform must take place to help address national and international issues of systemic racism. Their top three recommendations for reform are police transparency, standardization of training and procedures, and holding law enforcement to a higher standard.

For additional articles, books and references on topics of racism, Black history, police reform, social justice and more, take a look at this list of recent publications and interviews from College of Liberal Arts faculty:

Visual and performing arts and racism