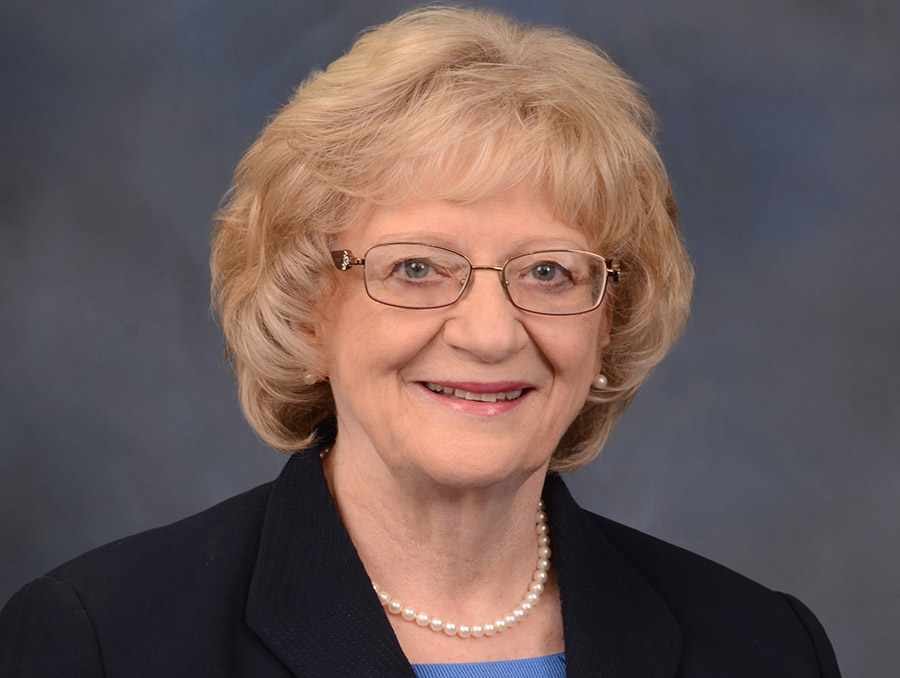 Joyce Woodhouse did not rise to the position of Nevada Senate Chief Majority Whip by being shy. Now somewhat of a city slicker, living in Henderson, Nevada, she grew up in rural Montana. The eldest of five sisters growing up on a Hereford cattle ranch in sheep country, she learned to take the bull by the horns at an early age. And her experiences in 4-H programs played a big role in developing not only her life skills but also her leadership skills.

“I was about 10 years old when I first got involved in 4-H,” she said. “My first projects were in clothing. My mom was a great seamstress, and she made all of our clothing. I think it was important that we all learned how to sew, so that she didn’t have to do it all.”

Woodhouse said she learned to sew just about anything, even making wool suits and an evening gown by the time she got into high school.

“Then, I also joined the 4-H food clubs, learning how to cook,” she said. “It was important that I know my way around the kitchen to help take care of the family meals.”

However, the assertive and confident retired teacher, principal and education administrator did not stick to what at the time were considered traditional “female” 4-H activities, which one might assume would have been the case 60+ years ago in rural Montana.

“My dad had a Hereford cattle ranch, so I did home improvement projects and a lot of woodworking activity too,” Woodhouse shared. “And in high school when I was in 4-H, I always showed and sold a steer at the fair, and all that money went into my college fund. I also had a heifer every year and showed them. The 4-H Fair was every August. That was the big culminating event every year, to bring your projects to the fair in Big Timber, Montana.”

Preparing her for success in high school and college

Woodhouse, who moved from Montana to southern Nevada for a teaching job after graduating from Carroll College, said her 4-H experiences also helped her to be successful in high school and later in college. She went on to earn two master’s degrees at University of Nevada, Las Vegas.

“I learned you have to stick to it, get your projects ready on time, be on time to meetings and have your projects ready for the fair,” she said. “4-H helped me in school by teaching me time management, that I had to get my work done on time and to the best of my ability, and to always do my best. I always wanted those blue ribbons, not the white or red ones.”

Woodhouse said 4-H also helped build her leadership skills, as she served as secretary, vice president and president of her 4-H club. Those leadership skills helped her and 29 other former 4-Hers be selected for the People to People Ambassador Program after graduating from college.

“Anyone could apply, but all of us who were selected had been in 4-H,” Woodhouse said.

The group visited eight countries in Europe over the course of month. They were bussed out to farming communities where they met with the farmers and their workers, starting in Scotland and the French countryside.

“We learned what they did in their enterprises and had an opportunity to share what we were doing in Montana,” Woodhouse said.

But, it was their visits to Yugoslavia, Czechoslovakia and Berlin that left the biggest impression on her. She recounts the trip like it was yesterday:

“It was extremely rigid in Yugoslavia, which was under Soviet rule. And, there were no tractors, hay balers or anything like that. Women in the field were dressed head to toe in dark clothing in the field, and it was July and it was hot. They didn’t look up and wave. The state-run administrators who ran this farm were very rigid, and I’m not sure they enjoyed having us there. Then we went to Czechoslovakia, which was starting to come out of Soviet rule. It had a few pieces of machinery, and they were a bit friendlier.

"We went into West Berlin, and it was very open and cosmopolitan, but then we got on a bus and were driven to East Berlin. We saw all the huge walls, with glass and barbed wire on them to stop people from escaping to the West. Guards were in their towers with their rifles pointed at us. We all came back knowing that the U.S. was a really great place to live.

“It was a life-changing experience. I certainly would not have had that experience without 4-H.”

Woodhouse said that although her experience in 4-H was only rural, in a ranching community, she realizes that has changed.

“That was the time we were in. But, I think over time, 4-H has become more inclusive, and it can be in a town, in a city, in a metropolitan area. I think it’s a good change so that young people have more opportunities to do for themselves and learn from others,” she said. “It’s really important that young people today have the opportunity to develop their own skills, and especially leadership skills. Certainly, the new 4-H provides that.”

University of Nevada Cooperative Extension’s 4-H programs include urban and rural clubs and activities that help youth develop skills in communications, science, leadership, citizenship and healthy living. Youth involved in 4-H are five times more likely to graduate from college and four times more likely to contribute to their communities. For more information, contact your local Extension office or 775-784-4779.