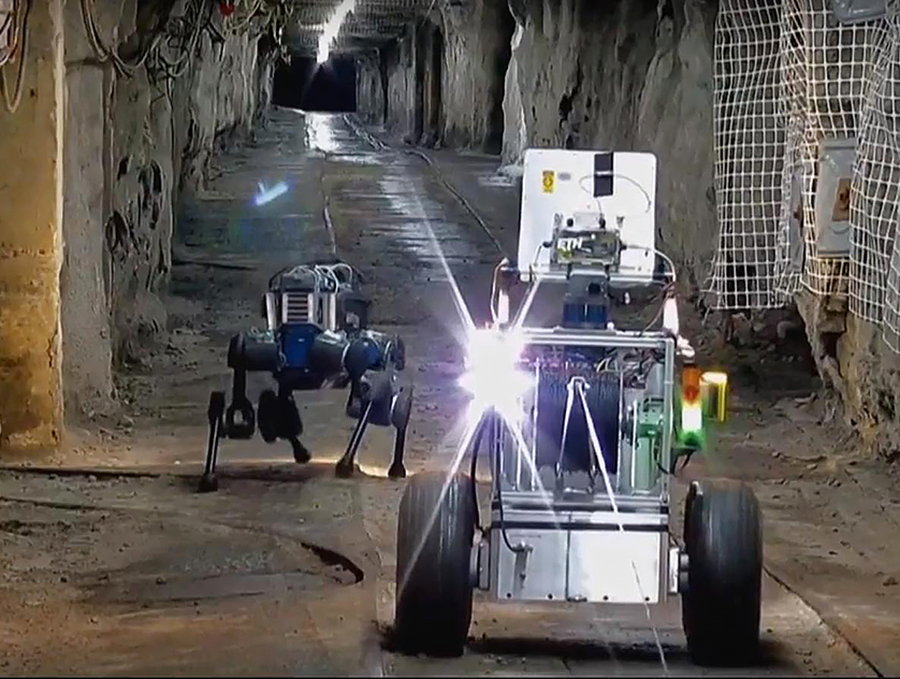 Team CERBERUS, an international collaboration based in the College of Engineering, has been selected to move on to the second round of the exclusive DARPA Subterranean Challenge, the Defense Advanced Research Projects Agency’s latest robotics competition.

Led by Kostas Alexis, assistant professor in the Computer Science and Engineering Department, in the first round the CERBERUS team rolled out their autonomous robotics technologies aimed at revolutionizing how robotic systems navigate and operate in the underground domain – human-made tunnel systems, urban underground settings and natural cave networks that are too dangerous, dark, deep and unknown to risk human lives. The first round of the challenge, the tunnel competition, was held in August.

"As Team CERBERUS, we are even more excited for the future steps of the DARPA Subterranean Challenge and we look forward to the Urban and Cave Circuits in 2020,” Alexis said. “With the lessons learned from the Tunnel Circuit we aim to revolutionize how walking and flying robots can work collaboratively in a manner that provides a unified solution to the multiple challenges of subterranean robotic entry and exploration."

In the Tunnel Circuit, robots that walk, fly and roll were put to the test navigating in a defunct mine system in Pittsburg, Pennsylvania. Nevada’s Team CERBERUS is one of 11 robotics teams from around the world that participated in the first round. The teams brought their novel approaches to rapidly map, explore and search underground environments in time-sensitive operations critical for the civilian and military domains alike.

“Our team got the sixth position out of 11 outstanding teams,” Alexis, said about the first challenge. “We knew from the beginning that our legged locomotion and flying robots approach would not be at maximum maturity – compared to, for example, wheeled platforms. We are confident, however, that our approach is the best way to go to provide a unified solution for all the environments the DARPA Subterranean Challenge is about; such as tunnels, caves and metropolitan underground infrastructure.”

The second Challenge in February 2020, the Urban Circuit, features the exploration of underground metropolitan infrastructure such as a subway or sewers that can have complex layouts with multiple stories and span several city blocks. These areas are critical for search and rescue, security and other application domains.

The third Challenge in August 2020, the Cave Circuit, refers to the exploration of natural cave networks - environments that are also crucial for a variety of search and rescue applications. Natural cave networks often have irregular geological structures, with both constrained passages and large caverns.

“The experience of the Tunnel Circuit of the DARPA Subterranean Challenge was unique and extremely rewarding for the whole team,” Alexis said. “It was a combination of extreme challenge and motivation, combined with working with good colleagues and getting to know more. We are honored that we had the chance to be there.”

Their walking and flying autonomous robots are equipped with multi-modal perception systems, navigation and mapping autonomy and self-organized networked communications. These features enable robust and reliable navigation, exploration, and mapping and object search.

A typical CERBERUS mission relates to the deployment of two legged robots, a wheeled communications vehicle, one advanced autonomous exploration aerial robot and one collision-tolerant aerial robot. The flying robots explore as rapidly as possible and share maps. The legged robot systems undertake the task of long-term exploration and mapping.

The deployments during the competition were based on the collaboration between all of the robots, and in most runs at least one of each were deployed.

“All competitors presented excellent research and systems,” Alexis, who heads the University of Nevada, Reno’s Autonomous Robots Lab, said. “The majority brought wheeled platforms and thus presented increased readiness and ability to score. One other team presented a combination of walking and flying robots (Team PLUTO from UPENN). A self-funded team presented a Blimp-based solution which was really cool. The teams with wheeled or tracked robots broadly scored best due to the readiness of the systems (mature technologies) and their applicability to the terrain. Carnegie Mellon University scored first with an in-house developed powerful and high-performing autonomous wheeled system. All teams presented excellent and well-performing systems.”

All the types of systems CERBERUS developed are capable of resilient localization in the sensing-degraded environments found in subterranean settings (such as smoke, dust and mist) and decide on their own with respect to the best path to follow.

“Working as part of the University and CERBERUS team is very exciting for SNC,” Greg Cox, Executive Vice President for Electronic & Information Systems at Sierra Nevada Corporation, said. “The next phase of the DARPA SubT Challenge will provide an opportunity to demonstrate the effectiveness of combining several of SNC’s advanced technologies with those of the team to solve the challenges of unmanned navigation and mapping and control and autonomous operations. We are honored to work with our academic partners in Nevada and from around the world to stay on the leading edge of autonomy and robotics.”

The CERBERUS team at the competition involved 19 team members at the NIOSH facilities and roughly 10 more before and during the competition. There were six members from the College of Engineering at the event.

See a quick explanation of the team’s participation in the Subterranean Challenge on YouTube.