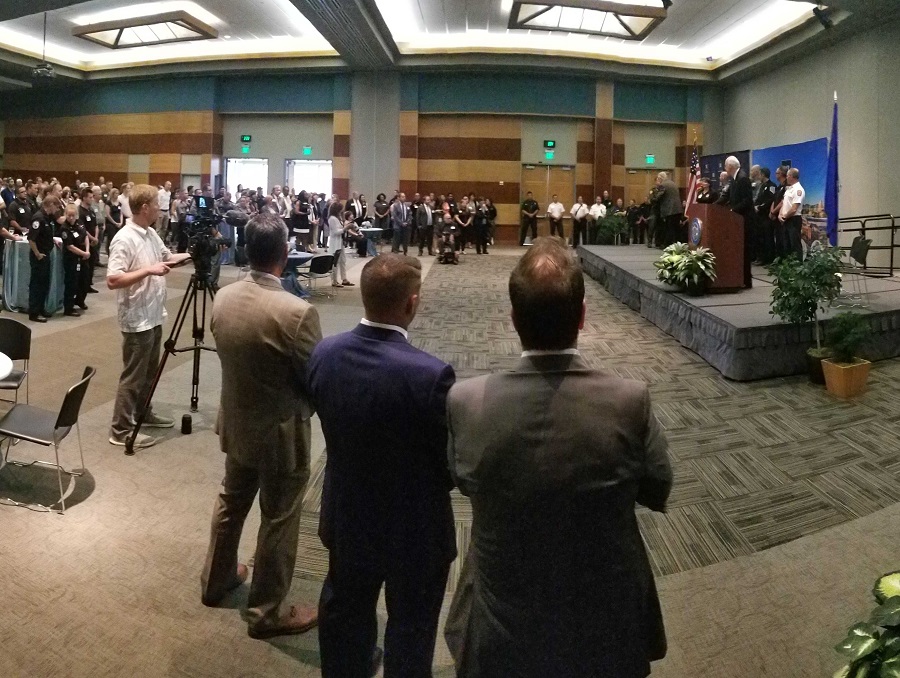 The campus community gathered on Wednesday, Sept. 4, in the Glick Ballrooms of the Joe Crowley Student Union for a reception to say “Thank You” to all those whose work helped move the University forward in the wake of the July 5 explosion that damaged Argenta and Nye Halls.

The event, which was jointly sponsored by the University and the Nevada System of Higher Education, recognized the 21 public safety and emergency entities that responded to the explosion, University staff and students who worked in the hours and days after the explosion, as well as public authorities, public utilities and private companies who all played a role in bringing the campus back to a sense of normalcy.

President Marc Johnson, Board of Regents Chair Jason Geddes and Nevada Gov. Steve Sisolak were on hand to praise the effort, and to thank all who were in attendance. Since the blast, University employees and students have worked around the clock to mitigate the impact on the University’s fall semester. In the aftermath of the blast, an agreement was reached with Eldorado Resorts to house the 1,300 students who were to have been housed in Argenta and Nye in what is now known as “Wolf Pack Tower,” a stand-alone, non-gaming tower that had previously been used by Circus Circus Reno. An interim dining facility, “Howler Village,” was also erected near Great Basin Hall before fall semester classes began on Aug. 26.

“I am humbled by the way people throughout the state have reached out to support the University.”

Geddes added that he had been impressed by the University’s response, both in the moments and hours after the explosion and in the weeks that have followed.

“The sense of resiliency, of working together so that the University continued to operate smoothly and emphatically, has been part of the University’s story of recovery since the explosion,” he said. “This speaks to the character of the people who work, live and study on this campus … and it speaks to the culture of this University.”

“It’s been 61 days since the explosion at Argenta Hall on July 5,” Johnson said. “Sixty-one days since you responded to the alarms, searched for students, and secured the building. For many of you, the response was an intense few hours as the community came together hoping that everyone made it out of the building safely. For others, that was the first day of making new plans and spending countless hours preparing to welcome students, faculty and staff back to the University for our fall semester. To our great relief, there were no lives lost, and those who were injured were treated and released.

“So, today, we thought it would be nice to get together and have time to visit with one another in a relaxed environment ... to socialize and reconnect, and to say ‘thank you’ to each person who played a part in the cohesive effort made to secure our campus and help us move forward.”

Representatives of many of the public safety and emergency entities involved with the initial responses to the blast were on hand on Wednesday, and gathered in a group behind the speaker’s podium. They received congratulations from Sisolak, Johnson and Geddes.

Sisolak complimented the first responders for their actions: “We didn’t have fatalities and injuries were minimal, because of the folks behind me … They didn’t think twice in performing their duties.”

“There were 21 public entities that responded to the explosion,” Johnson said. “This meant that while some departments were responding to the crisis on campus, other public departments stepped-up and managed the responsibilities of the first responders. It was a coordinated effort that happened seamlessly.”