Felicia DeWald recognized for her exceptional leadership of the program 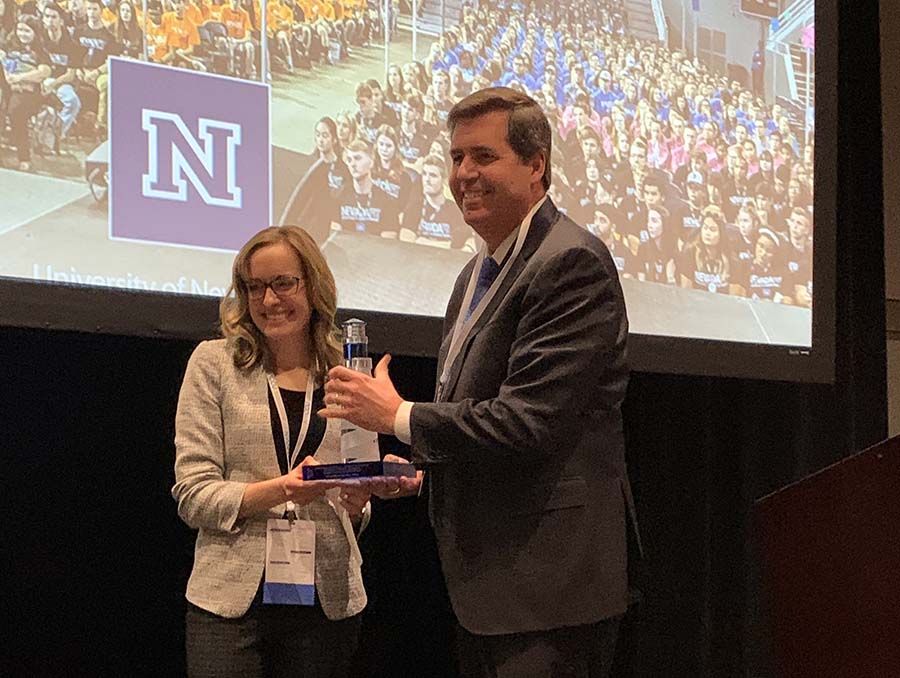 Felicia DeWald recognized for her exceptional leadership of the program

The University of Nevada, Reno was selected this year to receive the annual Beacon Award for Excellence in Student Achievement and Success at the 2019 Northwest Commission on Colleges and Universities (NWCCU) conference.

Award winners demonstrate distinctive, measurable and replicable innovations that have resulted in student achievement and success at the institutional or programmatic level, including innovations in advising and mentoring, alternative credentialing, experiential learning, learning communities or other such efforts.

The 2019 award, in the category of an NWCCU institution with more than 6,000 students, is in recognition of the impact of the University’s academic boot camp, NevadaFIT (Freshman Intensive Transition). Felicia Dewald, director of NevadaFIT, accepted the Beacon Award on behalf of the University and was recognized for her exceptional leadership of the program.

“The University is proud of the many milestones NevadaFIT has attained and excited to be recognized for these strides,” University Executive Vice President and Provost Kevin Carman said. "The University is on the leading edge of a growing number of universities that offer a program to help students successfully transition from high school to college. In the NevadaFIT program, students learn the value of going to class, sitting up front, how to study with other students and how to make effective use of resources like the writing and math centers."

NevadaFIT takes place the week before the start of the fall semester and is designed to increase success for all students in every major. Based on the “BIOS” program that was established at Louisiana State University for biology majors more than a decade ago, the University modified the BIOS model in several ways to make the boot camp impactful for students across disciplines. Each college and school has its own version of NevadaFIT that allows students to connect with faculty and students within their major.

“We are convinced that the primary reason that NevadaFIT is successful is that it focuses on showing students how to be successful in a college class by exposing them to a realistic class experience,” DeWald said.

NevadaFIT began in 2013 with 48 students in biology. NevadaFIT has grown each year since. In Fall 2019, 2,546 students participated in NevadaFIT programs that spanned all academic majors at the University. This upcoming school year, NevadaFIT will be required of all entering freshmen. This continued growth is a direct result of the positive impact NevadaFIT has on students.

“We measure the impact of NevadaFIT by following retention and graduation rates, the latter being the ultimate measure of student success,” DeWald said. “Fall-to-fall retention rates of NevadaFIT participants is consistently above institutional averages of 80-81%.”

NevadaFIT is a self-supporting program in which its revenue determines its budget. The program is funded by a course fee of $250 and the one-credit tuition for the class. Since 2016, NevadaFIT is a one-credit course that counts as an elective toward graduation. Students can build the tuition for NevadaFIT into their financial aid packages, making the tuition cost much easier to absorb. Tuition and course-fee revenue covers individual camp expenses and central expenses.

“The University’s goal is to make NevadaFIT affordable for all students, which is why we seek philanthropic support that allows low-income students to attend NevadaFIT,” DeWald said.

Students are surveyed after NevadaFIT ends, then again after completing their first semester of classes. These surveys reveal a side of NevadaFIT that, though difficult to measure, may be just as important in contributing to student success. An intense week like NevadaFIT helps students to bond. In a survey, one student noted “that the relationships I created with the students, my peers, were very important because you make friends instantly. Those friends are in the same field as you, taking generally the same classes as you, which makes it helpful to be able to work together, study together, and begin to create connections.”

DeWald was joined by a few University colleagues at the 2019 conference held Nov. 20-22 in Seattle, Washington.

“The success of NevadaFIT has been the direct result of enthusiastic support by deans, faculty, academic advisors and all aspects of student services,” DeWald said. “NevadaFIT is now an integral part of the University of Nevada, Reno recruiting literature and is featured at recruiting and orientation events. Its implementation has required the modification of procedures in residential life, the registrar’s office and human resources, among others. NevadaFIT is now part of the institutional fabric of the Nevada experience.”