Hosted by the College of Engineering, the community-oriented event was held at the Joe Crowley Student Union 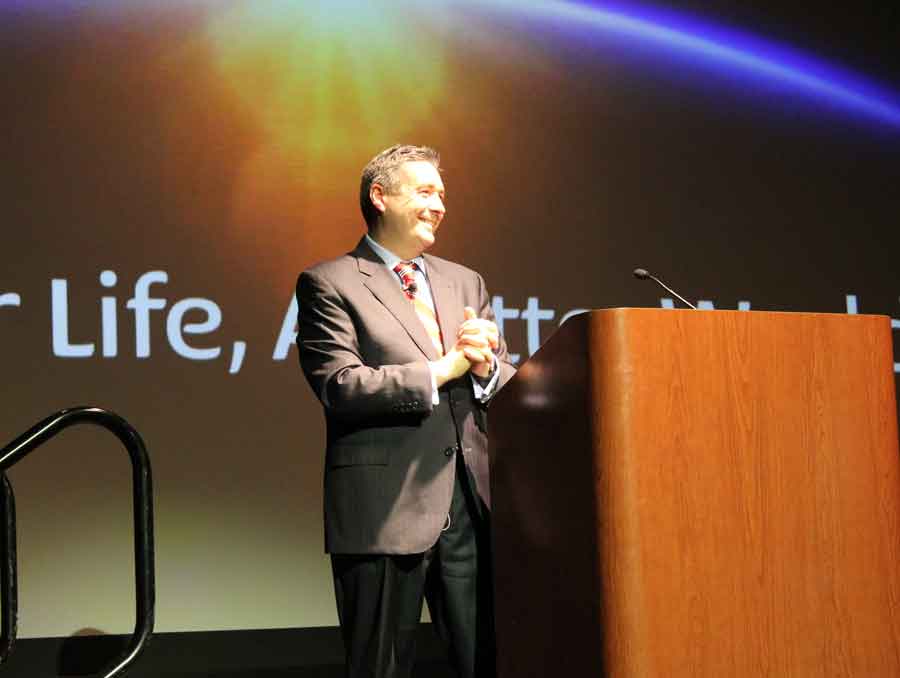 Hosted by the College of Engineering, the community-oriented event was held at the Joe Crowley Student Union

Speaking to a crowd of 185 people, Allan Swan, the President of Panasonic Energy of North America cited the seven principles that the company follows: a contribution to society, fairness and honesty, cooperation and team spirit, effort, courtesy and humility, adaptability and gratitude.

“We love what we do: we are the number one battery maker for the EV [electric vehicle] market in the world, in both technology and output,” Swan said. “Here in Northern Nevada all we focus on is getting better and creating that winning environment for our team members and supporting the wider Northern Nevada community.”

Swan was the speaker for the 2019 College of Engineering Distinguished Lecture Series Nov. 20. He addressed the crowd about the “Next 100 Years” of the company. Swan’s biggest takeaway from his speech was that as a global technology company, their success can be traced back to the founder and the culture created by him.

According to Swan, the company is creating a “high performance culture” that supports the team members at the Gigafactory in Sparks, and the positive workforce environment helps greatly. Panasonic has made over 2 billion batteries for Tesla’s Model 3 and, as of next quarter, will make batteries for their Model Y.

“The next generation of students are very thoughtful in supporting the world and the environmental challenges we face, at Panasonic you can be in a new technology that reduces significantly the CO2 gas effects, in a culture that supports its people and being a global company has one of those interesting opportunities that can support you in a number of career changes in your lifetime and being able to make those changes by working in different parts of the world,” Swan said.

According to Swan, the batteries made in Northern Nevada are some of the most powerful in the world, more than the ones made in Japan. He also credits the innovation from the company and the people who are a part of Panasonic to its success. Describing the workers as enthusiastic, energetic and willing to learn and do better, Swan says that it’s “absolutely the best place to work.”

“And we’re doing it all here with local people in Northern Nevada. The Gigafactory is huge- I walk seven miles a day around it,” he said. “It will be the biggest factory in the world when we are done building in it.”

The Distinguished Lecture Series, started in 2010 by Dean Manos Maragakis, began with a poster session where engineering student clubs and their leaders presented their research.

“The College of Engineering is exploding, not growing,” Maragakis joked during his opening remarks. “We are having a record of productivity. As we are growing we focus on our vision to be one of the best universities, and we want our students to be able to compete anywhere.”

Before Panasonic, Swan was Senior Vice President of Operations for the Defense Sector in the U.S. for Rolls-Royce, and has held several senior executive leadership positions in operations and corporate strategies for Thyssen Krupp and United Technologies as well. During his time with Rolls-Royce, he was responsible for five manufacturing plants with over 1,500 employees. He has been in his current role with Panasonic since September 2018.

Swan is a graduate of Southampton University with a Master’s degree in global supply chain management, and also holds numerous management diplomas. He has been in the automotive and aerospace industry for 30 years.

Newark, New Jersey-based Panasonic Corporation of North America is a leading technology partner and integrator to businesses, government agencies and consumers across the region. The company is the principal North American subsidiary of the Osaka, Japan-based Panasonic Corporation and “leverages its strengths in immersive entertainment, sustainable energy, automated supply chains and connected solutions to provide secure and resilient integrated solutions for B2B customers.”