One clay rectangle at a time, row upon rows of brick and mortar, was laid by SAM. However, SAM isn't a mason. SAM100 is a bricklaying robot – the first to be used in the state of Nevada.

The new University of Nevada, Reno Arts Building employed state-of-the-art technology in the construction of the $35.5 million facility.

A-1 Masonry and Sandblasting and general contractor Q&D Construction brought the robot to the project to help lay more than 60,000 units of bricks. In total, about 100,000 bricks will be installed in the three-story building, according to Jennifer Roberts, owner of Las Vegas' A-1 Masonry. Roberts graduated from the University in 2002 with a dual degree in psychology and criminal justice.

"With this being the first time SAM100 has been used anywhere in Nevada, it is a clear-cut sign that we are adapting and willing to accept new techniques, processes and procedures for use and implementation in the construction industry to give us an advantage with bidding and performing work," said Jeff Van Dellen, project manager for Q&D Construction LLC. "This technology is just one example of innovation implemented by A-1, a masonry subcontractor Q&D has worked with for many years."

A-1, a woman-owned small business, is the only SAM-certified contactor in Nevada with exclusive rights for use.

SAM stands for Semi-Automated Mason made by Construction Robotics out of New York. It uses a robotic arm, computer programming, and a materials-feeder system. The metal arm spreads mortar on brick and uses a laser-guided system to lay rows.

At the University construction site, it was installing about one brick every eight seconds. Van Dellen said it could do the work of five masons, especially in a tight labor market.

"I can't get enough masons in to do the work that SAM can do," said Robert DeBenedetto, masonry foreman for A-1 Masonry. "While I have a crew of five guys working with SAM, I can get other crews doing other parts of the building."

"As the labor market and schedules continue to tighten, finding qualified bricklayers is an industry-wide struggle," Roberts said. "SAM is one innovative solution, which allows A-1 to accelerate schedules while training more masons." 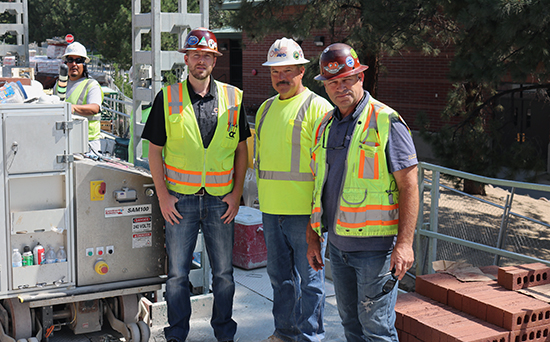 While the robot does the heavy lifting, humans are still needed to set up the Hydro-Mobile scaffolding and SAM, program the design, load bricks and mortar, align the row, clean the mortar joints and do the finishing touched to set the brick.

The robot is designed to work on large, uninterrupted walls. So, the first five feet of any area, corners or around windows and doors must be done by hand by a mason.

It has sped up the brick veneer installation process by 50 percent, making it easier to coordinate with adjacent finishes and materials and having the ability to bring in those trades sooner than if the veneer was laid by hand, Van Dellen said. 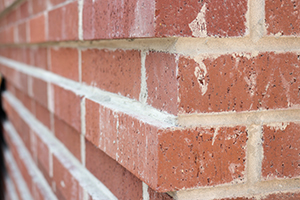 SAM100 can lay the bricks in patterns.

The machine can lay up to 200-250 bricks per hour, while a mason can average 250 per day. Meaning what would have taken about four to five months to complete was done in two to three months.

The College of Liberal Arts and the School of the Arts are expanding their roles and footprint on the campus and community as they enhance the quality of art and music facilities for students, faculty and the public.

Construction is scheduled to be completed in the fall, while a grand opening ceremony will be held during the Spring 2019 semester.