There are 119 board-certified forensic anthropologists in the country and only one in the state of Nevada. Assistant Professor of anthropology, Marin Pilloud, is representing the College of Liberal Arts in a big way as the State's only board-certified forensic anthropologist. This certification makes Pilloud highly coveted and qualified to work with the Washoe County Regional Medical Examiner's Office. She also frequently gets requests from many states around the nation to consult on recoveries of human remains.

It's a lot like the television show "Bones." Although, Pilloud said she hates to make that connection as to not overly-sensationalize the field. But, forensic anthropology is about looking at health and disease through the skeleton. 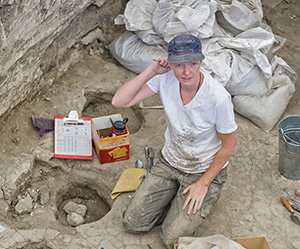 Pilloud may be humble about her profession, but it can come with fame. She was recently asked to take part in one episode of the television show "Zodiac Killer" on the History Channel. When a recovery was underway in Truckee, Calif., the show needed a local forensic anthropologist and Pilloud was called in for filming. Pilloud is no one-hit-wonder though - she was also called out to take part in the television show "Expedition Unknown" on the Travel Channel.

Being an actor isn't her claim to fame. Pilloud's commitment to the field of anthropology and her years of experience in forensic anthropology are what professionals are after. It's her careful biological profile analysis and detailed skeletal examinations that fill her inboxes with requests.

Pilloud said, "We do the casework for the Washoe County coroner and the Medical Examiner's Office by performing the skeletal analysis." When remains are unidentifiable, the Medical Examiner's Office first performs soft-tissue analysis and then hands the case over to Pilloud and her graduate students to further examine the skeletal remains. They look at the biological profile and can help determine the sex, age and stature to help narrow the search window of identifying the body. They also look at things like how long the person has been dead and the trauma at the time of death.

After the Medical Examiner's Office hands the case over to Pilloud and her team, the process can take anywhere from one-to-six weeks to clean the remains to prepare for analysis. Then it can take several more weeks to complete a full analysis if the remains are unidentified. The coroner determines the cause of death, but sometimes Pilloud said they still call her in to consult on the skeletal analysis or offer a second opinion.

In addition to her forensics work, Pilloud still manages to find time to work on her research on prehistoric California and Neolithic Anatolia (Turkey). In this research, she looks at data on prehistoric skeletons to look at things like violence and group interaction. In the California project in particular, Pilloud is trying to determine how violence may correlate with climate change. In her research, she looks at indicators of stress and how those may have changed over time.

"Ultimately we would love for our research to be used to see how we can adapt to future climate change." At this time though, Pilloud's research is mostly aimed at understanding prehistory and how groups adapt to change over time.

As Pilloud modestly shared, anthropology is much more than just digging up bones. It's the careful examination of skeletons that help determine the changes of health and disease over time.