Canine Companions for Independence, ASUN Center for Student Engagement and the City of Reno are going to 'Pack the Park'

Canine Companions for Independence, ASUN Center for Student Engagement and the City of Reno are going to 'Pack the Park'

This year, the Associated Students of the University of Nevada, Reno is continuing to build the bridge between the community and the University in efforts to build the University as an inclusive environment. As a part of that effort, ASUN and the Center for Student Engagement are proud co-hosts of Canine for Companions for Independence DogFest Reno this year with the City of Reno. 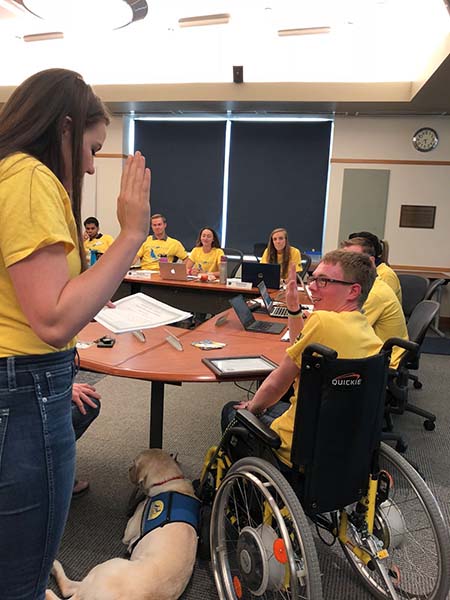 At the ASUN Senate meeting held Sept. 26, Logan Mason, right, a local recipient of a Canine Companions dog Lark, laying to the left of Mason, were made honorary ASUN Senators for the day for their advocacy for the organization. ASUN President Hannah Jackson, left, swears Mason and Lark in as senators.

"This will be an amazing event for the community to come out, donate, volunteer and learn about local non-profits," ASUN President Hannah Jackson said.

Canine Companions for Independence provides highly trained assistance dogs to children and adults with disabilities. Established in 1975, Canine Companions has six training centers across the country, including in California, Florida, Ohio, New York and Texas. Canine Companions is recognized worldwide for the excellence of its dogs, and the quality and longevity of the matches it makes between dogs and people. There is no charge for the dog, its training and ongoing follow-up services.

DogFest celebrates those efforts by raising money to fund the unique work they do, educating communities on these service dogs, and getting people aware of such a great opportunity.

DogFest Reno will feature a number of activities including a puppy raiser speaker, a local recipient of a service dog, tabling by local nonprofits, music by the Noteables, tabing by student clubs, a canine agility course, family-friendly activities, and a dog costume contest judged by Mariah Musselman.

"You can bring your family pup and participate in these activities and pick up free giveaways from PetSmart," Jackson said. "As you walk around the event you may even meet a graduate pup from Canine for Companions for Independence."

As a part of its vision for 2020, ASUN is working toward breaking down the walls between the University and the community. Focusing efforts on civic engagement, community outreach and empowering students to volunteer, DogFest meets all of these goals. Students have helped to plan this event, raising donations for the organization and have met with members of Canine for Companions Independence.

The goal for this year's DogFest Reno is to raise $20,000. Donations are accepted through the DogFest website up to two weeks after Saturday's event.