The successful mountaintop AlertWildfire camera system, pioneered by the University of Nevada, Reno at Lake Tahoe and Nevada's Great Basin to provide early detection and fire behavior intel, is expanding to Sonoma County, which was hit hard by wildfires in 2017.

"This is a great step for Sonoma County, where as much as 80 percent of acreage not burned last year is at risk, and a significant fraction of burned areas could also re-burn due to fuels that are four to five feet high in spots," Graham Kent, AlertWildfire project director and director of the Nevada Seismological Lab, said. "We'll bring the same state-of-the-art technology we've deployed in the Sierra Nevada, San Diego County and Orange County."

The Sonoma County Board of Supervisors, acting as the directors of the Sonoma County Water Agency, approved $422,000 for a fire camera pilot project in the Lake Sonoma watershed. They anticipate the AlertNorthBay cameras will be installed and working by the end of September.

"We learned a painful lesson last October about what these extreme weather events can produce in terms of wildfires and we're seeing already this year that it is the new normal," Sonoma County Water Agency director and Board of Supervisors Chair James Gore said. "I look forward to building on this effort and developing a regional network."

The funding, approved Aug. 7, will pay for the installation, maintenance and operation of the real-time cameras for the first year. The AlertWildfire group, a consortium of universities, including Scripps Institution of Oceanography at UC San Diego (through which the funding for this project will flow), Sonoma State University, and Oregon State University will build and maintain the system.

"These cameras will provide us with early fire detection and a level of situational awareness that is critical as we adapt to new wildfire behavior," Gore said. 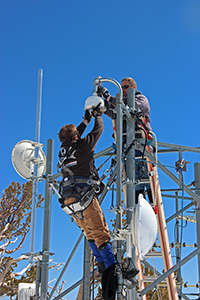 The fire-camera system is built to the specifications of the University of Nevada, Reno's Seismological Lab's earthquake monitoring communications network based in their College of Science. It features private high-speed internet connectivity capable of transmitting seismic, environmental and climate data, in addition to the live-streaming high-definition video from the fire cameras.

"These fire camera networks realize their full functionality when a cluster of cameras are deployed in one area and they afford early detection, 911 confirmation and situational awareness as well as triangulation to locate the fires," Neal Driscoll, a professor at UC San Diego and co-leader of AlertWildfire, said. "Sonoma County Water Agency's vision has made the North Bay region the next fire camera cluster."

The Sonoma County Sheriff's Office's microwave communications network has the bandwidth to support the project and will incorporate some of the cameras at existing microwave tower sites.

They can see for miles and miles

The final locations of the eight cameras have been determined, and locating them at four existing microwave sites will reduce implementation costs, county officials said. One camera can see 5,000 square miles during the day; and from 11,000 square miles to 20,000 square miles at night using its near-infrared capabilities (on unobstructed view sheds).

While firefighters work hard to put out the fires, the cameras give them intel immediately, improving the chances of putting out the fires more quickly, Kent said.

"Despite Artificial Intelligence-Machine vision and a nifty lightning interface we're testing, the greatest value is in response to 911 calls," he said. "Dispatch can know immediately, in 20 seconds, what the fire situation looks like, and fire managers can scale up or down without delays for guessing or waiting for spotter planes or helicopters for immediate knowledge."

The pilot project for the region is regarded as the first phase of a larger, regional network of fire cameras in Sonoma, Marin, Lake, Napa and Mendocino counties.

Fire managers can manually rotate, tilt, pan and zoom the 360-degree cameras. While fire agencies can move the cameras with this active pan-tilt-zoom functionality, the public can observe the real-time views, as well as the time-lapse functions with a 15-minute, 60-minute, 3-hour, 6-hour and 12-hour time-lapse utility built into the webpage viewer (right-click on the camera image for options). The Seismological Lab's YouTube channel, nvseismolab, has a library of videos captured from the network, such as the Perry Fire as it sets the stage for an apocalyptic near miss as Virginia Peak burns over.

The AlertWildfire mountaintop camera network tracked 500+ western wildfires since 2016. At Lake Tahoe, the system has been used successfully by firefighting managers for four fire seasons for early detection, to spot and track fires and for quicker, cheaper and more tactical response and suppression.

The system also played a critical role for early detection during an arson outbreak in late 2016 at South Lake Tahoe with some 30 fires in a 60-day period both in the City of South Lake Tahoe and the surrounding forests.

This summer, Alert Wildfire has installed two cameras in Lake County that are part of the North Bay cluster and two cameras in the Washington-Oregon-Idaho AlertWildfire region.