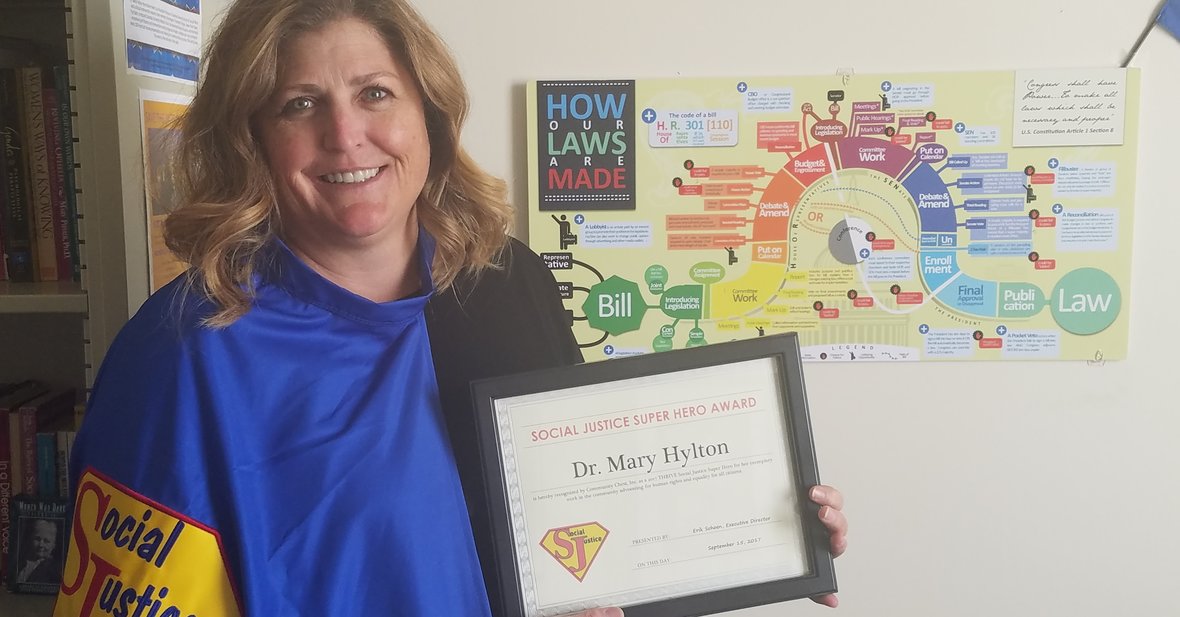 Congratulations to Mary Hylton, associate professor in the School of Social Work, who was honored as a 2017 Social Justice Super Hero by the Health Communities Coalition and Lyon County Human Services, at the 5th Annual Statewide THRIVE conference on Sept. 15.

The THRIVE Conference is inspired and coordinated by Community Chest - a Nevada nonprofit organization that strives to build healthy communities by providing social services, educational programs and a resource center to people in Northern Nevada.

Hylton was recognized for her work, done in conjunction with Communities in Schools of Western Nevada, to increase civil literacy among low income and minority high school student populations. Research shows that youth from low income and minority communities have fewer opportunities to build civic competency, which results in the potential for decreased political power among groups who are most vulnerable to fluctuations in economic and social policy.

Hylton's hope was to provide students with in-depth training on state and local government because she believes that when given the right skills, connections and opportunities, students can emerge as the next leaders within the community.

The University and CIS of Western Nevada offered Hylton's Civic Literacy Program to Hug High School students during the 2016-2017 school year. Course leaders began by conducting open discussions with students about privilege and the disparities that exist related to race, gender, socio-economic standing and education. They also worked toward being able to pinpoint issues of distrust in the government and facilitate ways to have voices be heard in a way to affect change.

Hylton involved her social work students to help guide the teens through the processes of assessing community needs, conducting a call-in campaign and making presentations before a government body.

"In one project, the Hug students lobbied the state legislature on three causes: to reduce the backlog of rape testing kits, to support expanding solar energy and in support of a school violence prevention program," Hylton said. Guided by University students, high school teens learned to track and read legislative bills and lobby at the legislature for these issues. They also met elected officials, including the governor, and testified in committee.

The pilot program was so successful that the University and CIS are planning an expansion of the program into Innovations High School and Vaughn Middle School in the near future.