On Friday, Sandoval joined President Marc Johnson in Ballroom C of the Joe Crowley Student Union to sign bills that will pave the way for the University to build a new engineering building, continue to grow the successful NevadaTeach program and further the reach of economic development initiatives associated with autonomous vehicles. 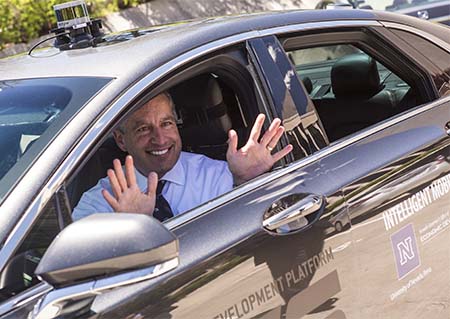 Governor Sandoval arrives to the University of Nevada, Reno campus in an autonomous vehicle Friday, June 16, 2017, demonstrating "no hands" needed behind the wheel.

"Today is that day where we are going to take meaningful steps forward in achieving these goals," Gov. Sandoval said. "We've got to see the future then we've got to embrace the future, then we have to shape the future and that's what the importance of these bills are today."

In many ways, all three bills represent a theme that Sandoval has championed throughout his two terms as governor - a "New Nevada," based on economic diversification and development through the creation of knowledge-based initiatives and people who in the years to come will forge a stronger economic path for the state.

"The University is very grateful for the leadership Gov. Sandoval has provided, and, in addition, how our legislative leaders have followed through on several initiatives that will strengthen our University's ability to meet the needs of a changing and more economically diverse Nevada," Johnson said. "In particular, the new engineering building will further increase our capacity to produce the graduates and the R&D that will provide the foundation for our economy of the future. The bills that Gov. Sandoval signed today better position our University to improve the quality of education, the quality of economic development and the quality of life of all Nevadans."

• The state's capital improvement projects package, which included the University's proposal for a new $87.8 million engineering building. Construction for this facility, which will be in excess of 90,000 square feet and will include state-of-the-art laboratory, research and teaching space, could begin as early as fall 2018. Half of the building will be paid for by state funds and the other half is being raised through philanthropy, private donations and University funds.

"The first question companies ask is about our state's workforce," Gov. Sandoval said. "When I tell them we're building a new engineering building, it's really an aha moment."

• Assembly Bill 522 includes $300,000 for the successful NevadaTeach program, which is helping produce highly qualified graduates to teach the fields of mathematics, science or engineering at the middle or high school level in Nevada.

• The autonomous vehicles bill, AB 69, allows the use of fully autonomous vehicles for commercial use. The bill is considered key in helping Nevada continue to be a leader in the development and use of autonomous vehicles. It will have important implications for the University's Intelligent Mobility initiative, an ambitious effort to explore solutions for safe, clean and efficient transportation and to establish the greater Reno-Sparks-Carson City area in Northern Nevada as a Living Lab for research and testing. 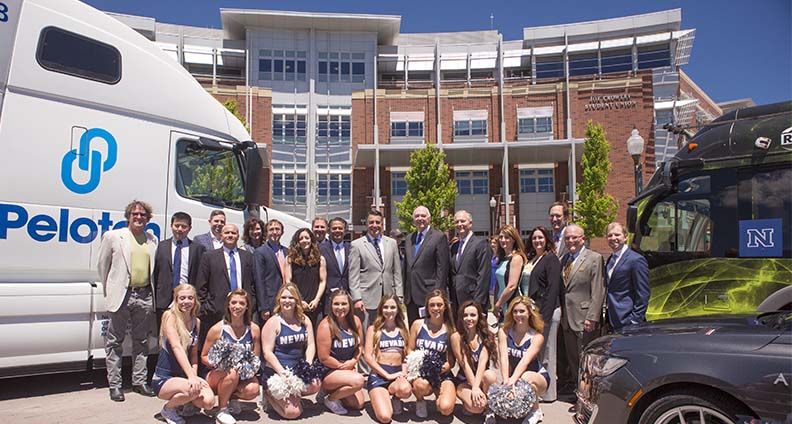 Governor Sandoval, middle, with University President Marc Johnson at the University of Nevada, Reno, in between vehicles with autonomous technology.