An ambitious effort to explore solutions for safe, clean and efficient transportation and to establish a "Living Lab" in the northern Nevada communities of Reno, Sparks and Carson City is under way. Intelligent Mobility builds on the expertise of University of Nevada, Reno researchers in advanced-autonomous systems, computer sciences, synchronized mobility, robotics and civil engineering. Public transportation is the initial, primary focus. 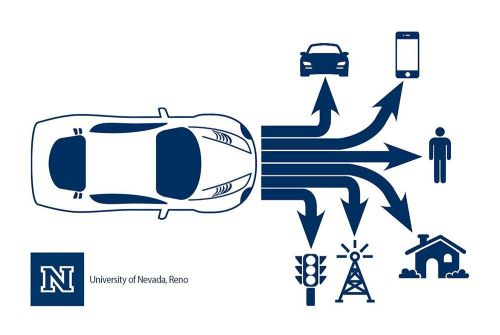 Image depicts how a vehicle can communicate with its environment; shown is an image of a car and with individual arrows pointing to another car, mobile phone, person, house, GPS and traffic signal.

The Living Lab will use Regional Transportation Commission of Washoe County's state-of-the-art electric buses manufactured by Proterra, a California-based leader in the design and manufacture of zero-emission, battery-electric buses. The driver-operated buses are being fully instrumented with a number of systems to sense, gather and integrate a range of data. These complex systems - already being tested on vehicles in the Reno-Sparks-Carson area - will collect data that will contribute to new ideas, technologies and systems.

Building on Track-Record in Autonomous Vehicles and Systems

University of Nevada, Reno researchers have long been at the leading edge of research in autonomous systems and vehicles. Consider the example of Professor Raul Rojas in the University's College of Science, who is internationally known for his work in autonomous vehicles and, in 2015, drove 1,500 miles without hands from the U.S. border at Nogales to Mexico City. It was the longest-ever autonomous drive in Mexico.

The initial research conducted through Intelligent Mobility will explore how vehicles sense their environment and communicate with other vehicles, infrastructure such as traffic signals and systems, and individual people through their mobile devices. This work builds primarily on the expertise and research track-record of three researchers in the University's College of Engineering: 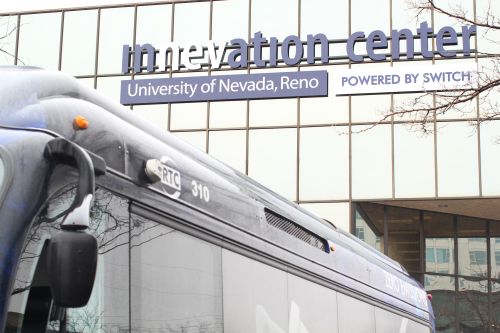 An RTC electric bus manufactured by Proterra sits outside the University’s Innevation Center—Powered by Switch.

"This kind of collaboration is transformative," Mridul Gautam, the University's vice president of research and innovation, said of the broad-based coalition of partners. "Things are getting done in Nevada, and it's because organizations join together around a common goal."

"As a result of collaboration with Fraunhofer, this takes on global importance and elevates the work we are doing to an international stage while injecting a layer of experience that will greatly benefit applied research organizations in Nevada," Hill said.

The University's Nevada Center for Applied Research - also supported by GOED and the State's Knowledge Fund - serves as the single point of contact for Intelligent Mobility. Launched in 2016 to advance the incubation and growth of business in Nevada, NCAR makes the University's labs, equipment and expertise available to industry and entrepreneurs.

Through Intelligent Mobility, researchers are working toward safe, synchronized, zero-emission mobility systems. And, by involving students in this work, they are contributing to the preparedness of the future workforce.

Alexis envisions the initiative resulting in advancements to improve driver performance, such as improved sensors to eliminate blind spots, improved support in degraded situations such as night-time driving or bad weather, and improved break-time response. And, he added, "They must be consistently reliable technologies you can bet your life on."