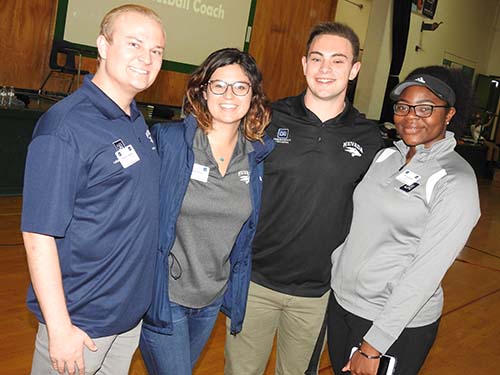 The Associated Students of the University of Nevada, Reno leaders, from left to right, Brandon Walberg, Nicole Flangas, Noah Teixeira and Precious Gbenjo.

More than 800 Clayton Pre-AP Academy middle school students donned white T-shirts donated by the Nevada Wolf Shop at the seventh annual College Day pep rally Friday, Oct. 13. For the first time, the shirts also included the Associated Students of the University of Nevada new slogan, I AM THE REAL NEVADA. The rally encouraged students to think about higher education and promote enthusiasm for future learning, and the T-shirt motto stimulated them to be proud of their individuality and uniqueness. 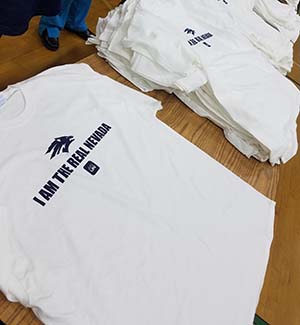 I AM THE REAL NEVADA T-Shirts. #IAMNevada

"Many of our students often talk about how the assembly makes them begin to see college as an attainable goal," Clayton Principal and University Alumnus Bruce Meissner said.

Meissner welcomed the students to the assembly and then introduced ASUN President Noah Teixeira, along with Director of Campus and Public Relations Brandon Walberg, College of Liberal Arts Senator Nicole Flangas and Director of Diversity and Inclusion Precious Gbenjo. Each provided insight to the #IAMNevada campaign, meant to inspire positivity and knowledge. 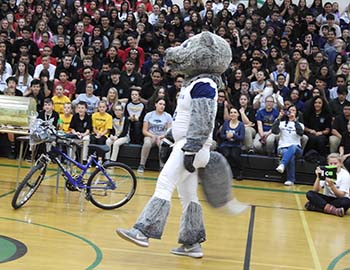 Nevada women's basketball coach Amanda Levens and two of her student athletes were introduced next. Levens provided a motivating message with points about leadership, teamwork and working hard. She asked the student body what they thought it meant to be leader. Many enthusiastic hands raised as students were eager to provide an answer.

"You have to be a hard worker," one student answered.

Then she asked what it meant to be tough.

"To roll with the punches," another student said. 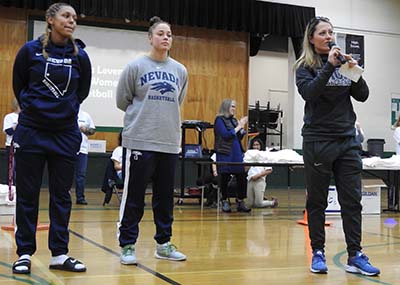 Energy and excitement filled the gymnasium throughout the pep rally.

The event also featured tunes played by the middle school pep band, a video slide show, a dance-off between the Nevada and Clayton mascots and the reciting of Nevada's Law of the Jungle lead by Nevada cheerleaders.

Clayton Middle School staff and students pose in their new I AM THE REAL NEVADA T-shirts.

The honor of being your president

The honor of being your president

The University Libraries provide instructional workshops on many topics you might not expect.

Construction management program builds interested engineers from the ground up

The new construction management minor will be housed in the Department of Civil & Environmental Engineering.