Wonder of the Mekong: Billions of fish migrate across Cambodia each year

Wonder of the Mekong: Billions of fish migrate across Cambodia each year

Billions of fish migrate down the Tonle Sap River outside of Phnom Penh every year from October to March – and scientists from the University of Nevada, Reno’s Global Water Center went to Cambodia recently to document it.

"It's one of the largest and most important animal migrations on Earth, and most people don’t realize it’s happening," Zeb Hogan University of Nevada, Reno biologist and host of the NatGeoWild show "Monster Fish," said. "The migration rivals the great terrestrial migrations of the Serengeti in Africa, or caribou in Alaska or the millions of songbirds traveling thousands of miles from Europe to reach wintering grounds in Africa."

Hogan, who is leading "The Wonders of the Mekong: A Foundation for Sustainable Development and Resilience," project funded by the U.S. Agency for International Development, has been working with the Cambodian Inland Fisheries and Development Institute since 2003 to study the huge migration.

From monster fish such as the Giant Mekong Catfish that reaches 600 pounds, to the tiny "trey riel," about 100 different kinds of fish make their seasonal swim to the Mekong River. In January and February in some years, the small, silvery carp are so plentiful that whole communities gather on the river banks to clean and process them. The piles of fish can be 10 feet high.

The "trey riel," or money fish in Khmer, are the lifeblood of the region – the base of the food chain for fish eaters above and below the water and a staple food for people living along the banks of the Mekong from Phnom Penh all the way to the Golden Triangle in northern Thailand and Laos.

"Migrating fish are an extremely important component of the ecosystem services that the Mekong River and its tributaries provide each year," Hogan said. "The fish harvested from the Mekong River basin have an estimated value of over $10 billion."

The migration, and the accompanying harvest, signifies the importance of the connection between the floodplain and the main river for people and for the fish caught in fishermen’s nets. With almost 50,000 tons of fish caught annually in peak years in a single fishery, there may be hundreds of thousands of tons of fish – tens of billons of individual animals, in the Tonle Sap Lake and Tonle Sap River systems.

"Over the past 10 years, we’ve tagged more than 4,000 fish, which is a very small amount considering the massive number of fish moving down the river," Hogan said. "We use tagging and catch monitoring to follow the migration." 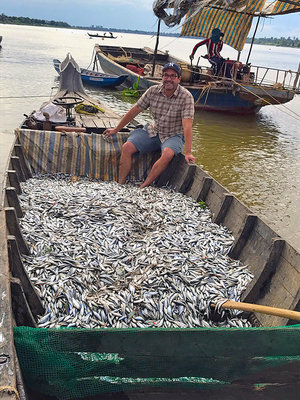 Of the fish they’ve tagged in years past in the Tonle Sap River, some have migrated to neighboring Vietnam in the south while others have been found 200 miles upstream, near the Laos border.

"Researchers may not have the means to accurately count billions of fish as they move underwater, sometimes at depths of more than 100 feet," Hogan said, "but fishermen do – during the annual migration, thousands of fishermen descend on the Tonle Sap to take advantage of the river's bounty."

The fishing nets are 80 feet wide at the mouth and 330 feet long. They can catch more than a ton of fish in an hour.

"I've counted hundreds fishing boats on the lower Tonle Sap River alone, lined up one after another, targeting the migration of smaller fish during a peak migration in January," Hogan said. "Fishermen tell stories of days when the catch is so great they must stop fishing so their nets won’t be carried downstream from the sheer weight of the fish."

The migrating fish are a small component of the many ecosystem services that the Mekong River and its tributaries provide each year. The migration is dependent on a healthy Mekong River and connections between upland tributaries (such as the Sekong and the rivers that feed the Tonle Sap Lake), the deep pools and dry season habitats of the Mekong, and the vast floodplains and flooded forest of the Tonle Sap Lake.

"Catch and productivity of the system also depend on the natural seasonal flows that push water and fish into the productive floodplain and out to the main river and spawning areas in the dry season. The significant movements of fish back out into the Mekong in the dry season are likely crucially important for the ecology of the system, often in underappreciated ways," Sudeep Chandra, director of the University of Nevada, Reno Global Water Center, said.

Hogan is a conservation biologist, a member of the University's Global Water Center, a National Geographic Explorer and Fellow and is the host of the National Geographic Monster Fish television program where he chronicles his research on the world's imperiled giant freshwater fish, megafish, that are more than six feet in length or weigh more than 200 pounds.