The 5-year project, "The Wonders of the Mekong: A Foundation for Sustainable Development and Resilience," aims to preserve a functional, biodiverse and healthy Mekong River. It is funded by the U.S. Agency for International Development.

"This project is a great opportunity for us to share our knowledge and expertise on water and biodiversity issues with other institutions and learn from the experiences of experts in the Mekong River Basin," Zeb Hogan, assistant research professor in the Department of Biology and lead researcher on the project, said. Hogan has conducted research on the river for 20 years. 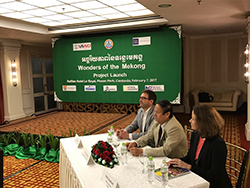 Attending the launch were several project partners, including one of the main partners on this project, the Cambodian Inland Fisheries Research and Development Institute. The team will be working with them on fisheries studies, migration studies and endangered species research.

"The Mekong River, with its total length of about (2,700 miles), is the most productive river on earth," Nao Thuk, Cambodian Secretary of State for Agriculture, Forestry and Fisheries, said. "The project will contribute to conserving the beauty and sustainability of this mighty river for the benefits of the people living on and along it." 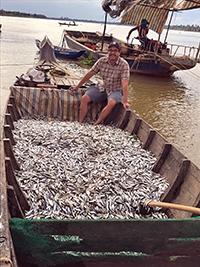 "USAID is pleased to partner with the University on this important initiative that will help maintain the ecological, cultural, and economic integrity of one of the most important river and delta systems in the world," Dunford said.

This first trip for the team to the Mekong River is mainly exploration and a study tour - finding the research locations, some sampling, and the kick-off event. The team is also doing preliminary studies on seasonal migration of fish.

The team includes: limnologist Sudeep Chandra, director of the Global Water Center in the University's College of Science, whose work focuses on the conservation and restoration of aquatic ecosystems with a goal of improving environmental policy; Forest Ecologist and Biogeographer Peter Weisberg in the University's College of Agriculture, Biotechnology and Natural Resources; David Crowther, science education professor in the College of Education and executive director of the University's Raggio Research Center for STEM Education; Thomas Dilts, research landscape ecologist in CABNR's Department of Natural Resources and Environmental Sciences with skills in Geographic Information Systems, remote sensing, habitat modeling, habitat connectivity modeling, landscape genetics; and Bonnie Trejo, research faculty member in the Aquatic Ecosystems Laboratory in the Department of Biology.

Hogan is a conservation biologist, a member of the University's Global Water Center, a National Geographic Explorer and Fellow and is the host of the National Geographic Monster Fish television program where he chronicles his research on the world's imperiled giant freshwater fish, megafish, that are more than six feet in length or weigh more than 200 pounds.