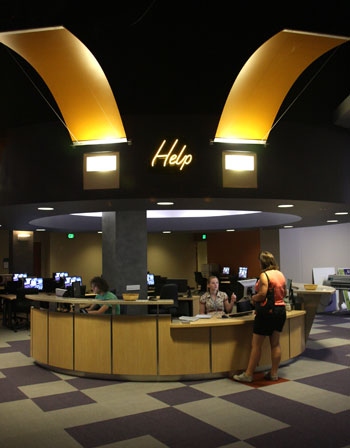 This October, during the last week of midterms, three students will stand under @One’s neon sign on the first floor of the Mathewson-IGT Knowledge Center. The three need to complete projects that will largely determine their semester grades.

The first student, a geography major, holds pages of data in his hand, ready to produce a detailed map. The second, a marketing major, meets with her group of classmates to produce a PowerPoint presentation and large poster to explain their business plan. And the third student, a journalism major, needs every last moment to finish his video assignment.

Unlike past semesters, everything these students need is now in @One, the newly opened, innovative technology hub designed to empower students who want to bring their ideas to life.

The first student heads to the Dataworks Lab to produce his map on the high-end, data-crunching computers. The second greets her group at a collaboration area in front of a wall-mounted video display screen. The last rushed to the Dynamic Media Lab to finish the work he had saved on one of the 30-inch Macs.

They unpack everything they need and set to work. They will be here for awhile, and luckily for them, they won't have to go anywhere else.

The hypothetical story above is just a sampling of the value @One adds to campus.

In addition to its top-of-the-line equipment, trained staff and specialists add a human touch to @One, where students, faculty and staff can organize information and ideas to create their work.

Before the Knowledge Center building opened, a group of library and information technology staff members sat in a room and tried to figure out what to call this new computing area. It had always been known that a space would be reserved in the Knowledge Center to serve the campus community in the way that @One now does. But at the time, it had no name. Longtime librarian Duncan Aldrich remembered the time when Steve Zink, dean of libraries and vice president for information technology, gave him an idea.

“He said that there was going to be a really high-tech oriented operation in the building somewhere,” Aldrich said. “And what better symbol is there for that these days than in an email address: the @ symbol.”

Aldrich and the group brainstormed, trying to imagine what students would call it themselves.

“I was trying to play with the first floor or at floor one when somebody said, ‘Floor one? What if we call it, at one?’ ” Aldrich said.

Despite the name’s origins, it embodied the concept that everything a student needs to create any project, whether it be a poster, a video, a paper or a presentation is in @One.

“I like that idea that it’s a one-stop shop,” Aldrich said.

Giving students what they need

For those who don’t know where to start, the @One help desk offers assistance from printing to renting equipment. Staff at the desk can also refer visitors to other specialists.

Students can type papers or log onto the Internet on one of the 90 Windows computers or seven Macs in @One's central area.

Visitors can print their documents at the printing station. Large-size posters can also be printed on the 60-inch-wide printer and laminated on the 40-inch-wide laminator.

The Dataworks Lab offers software and programming that allows students to produce visual aids such as detailed graphs or maps, and to perform higher-level math, science, visualization and data analysis.

“We waited until the last minute to order those computers so whatever Apple was doing, we’d get the latest and greatest,” Aldrich said.

Preparing students for the 'real world'

Before @One, those interested in videography had several places on campus to visit to produce high-quality videos or films.

“We had the idea that we really needed a lab where students could edit their video,” said Mark Gandolfo, manager of media design and production in Teaching and Learning Technologies. “We started up a couple of small ones here and there across campus.”

Gandolfo worked with Mike Simons, director of TLT, on developing a space in the Knowledge Center where students could rent equipment and edit their projects in the same area.

“We were presented with a wonderful opportunity to say if you were going to start from scratch how would you do it?” Gandolfo said. “In the planning process, this is what evolved out of that.”

The Dynamic Media Lab also has a recording booth, a feature that hasn’t been available to the campus until now.

“It’s predominantly going to be for a voice booth but it’s big enough for multiple people,” Gandolfo said. “Before this, there was not a sound room on campus anywhere.”

How the students and the campus would benefit from the features was key when it came to choosing the technology and the services @One would host.

“This is consistent with President Glick and Steve Zink’s idea that we want to bring Nevada up a notch all the way across,” Gandolfo said. “In what we have to offer and the caliber of what students produce at the end of their tenure here.”

Gandolfo believes that the services offered by @One will enhance students’ experience at the University and prepare them for their career, regardless of their major. The kind of technology and professional software hosted in @One is the same employers are currently using.

“Students are always doing stuff but it’s not what’s going in the real world,” Gandolfo said. “We really want to keep that connection there as well.”

While Gandolfo is looking ahead to the students’ futures, many students are concerned with what @One can do now.

Tomas Luquin, a 20-year-old business finance major and Nu Alpha Kappa fraternity member, recognizes how @One can help him and his fraternity.

Melissa Walton, 20-year-old English and political science major, takes to the idea that everything a student could need is in one area.

“I feel like it’s a big improvement over what used to be available,” Walton said. “It’s very centralized. Everything is in this building that you need. It has a lot of different appeal for different people.”

Aldrich echoes the students’ thoughts on the new facility. He is just as excited to see students passing under the neon sign for the first time as they are to find out what @One is.

“It provides a congenial atmosphere with a lot of strong customer support to assist students in finalizing and outputting projects,” Aldrich said. “And they put this all in one place.”