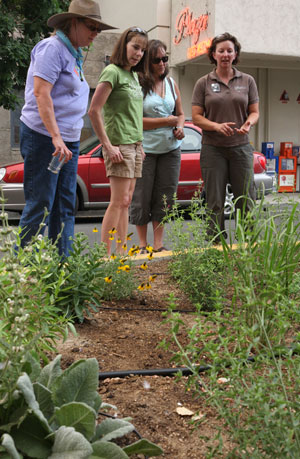 Leslie Allen has always been enthusiastic in her support of northern Nevada’s local food lifestyle.

As commercial horticulture program coordinator for University of Nevada Cooperative Extension (UNCE), it’s part of her job … yet her passion for this increasingly important field goes far beyond the norm.

So much so, in fact, that Allen’s love of what she does has found a new description.

Earlier this year, Allen was selected out of 15,000 national applicants to participate in a local eating study, known as “Locavore Nation,” where participants attempt to eat 80 percent of their food from local, organic and sustainable sources. “Locavore Nation” is sponsored by America Public Media’s radio show, “The Splendid Table,” which is broadcast locally on KUNR.

“Being a Locavore in the Truckee Meadows is a lot easier than most people think,” Allen says. “We are lucky enough to live only a short drive from Fallon and Yerington. These regions have a rich agricultural history and provided me all of my produce from May through December.”

Allen has also worked tirelessly to bring a similar “Locavore” ethos to downtown Reno, where her efforts have helped create downtown Reno’s first edible median. Together with dozens of permaculture enthusiasts and student volunteers from the University, a median near Reno’s West Street Market was replanted with vegetables this summer.

Allen has told the story of the median’s success in a blog entry entitled, “Our Garden In the Middle of the Street”:

“… the most amazing thing happened. Residents from the high-rise condos came down to help! They were so excited that a vegetable garden was going in just outside their front door. We created quite a buzz amongst the passers-by, and before we knew it the media showed up. What a success! … Perhaps our garden will inspire others to plant vegetables in places they never previously considered.”

Allen’s work has indeed inspired others. For her efforts, she and five other individuals and organizations will be honored on Monday, Nov. 17 during the 21st annual Golden Pine Cone Ball at the Joe Crowley Student Union. Allen will receive a Golden Pinecone award, which is presented each year to individuals and organizations that have made significant contributions toward sustaining and improving the natural environment of the Truckee Meadows. The Pine Cone Ball awards, sponsored by Nevada EcoNet, are considered the most prestigious environmental awards in northern Nevada.

In addition to Allen’s award, Stephen Wells, president of the Desert Research Institute, will receive special recognition as the area’s top public figure/servant. One of Wells’ good friends, University President Milt Glick, will present the award to Wells, who has promoted DRI’s research focus on climate change, and preservation of natural resources such as Lake Tahoe, the Truckee River and Walker Lake, among other things.

“Steve has been a truly remarkable steward for environmental efforts in our region, in our state, and throughout the world,” Glick said. “His leadership has certainly helped northern Nevada become a much more environmentally friendly and healthy place to live.”

Allen’s work in her field has been equally notable. Given her background, it isn’t surprising she has mobilized so many in the effort to plant tomatoes, corn, green beans and strawberries, just to name a few, in the West Street Market Urban Agriculture Demonstration Garden, located on the south end of West Street, between First and Second streets.

Allen, a California native, recalls that some of her earliest memories are of homegrown tomatoes and freshly caught crawdads. Following graduation from high school, Allen joined the Marines, and spent five years on active duty. She was stationed in Saudi Arabia during the Persian Gulf War.

The war had a profound impact on Allen.

“It was my time in the war that shaped the path of my future,” she says. “The environmental destruction of the Persian Gulf War affected me deeply.”

After honorably leaving the Marines, she majored in conservation biology at the University of California, Davis, and then earned her master’s degree in ecology.

Following graduate school, Allen and her husband, both avid rock climbers, lived and worked in Yosemite National Park. One of her jobs was to map plant communities in the park. The couple eventually moved to Reno, where Allen joined Cooperative Extension, first serving as an environmental educator and now working in the horticulture department.

The self-described “plant geek” says she couldn’t imagine having a better job, one that has helped others re-think how we consume, why we consume, and what ways we can more efficiently and healthfully consume.

“Eating locally this past year has brought me a new sense of self-reliance and independence that I’m simply not willing to give up,” Allen says.