110-foot bridge destroyed in ‘quake’ at the University 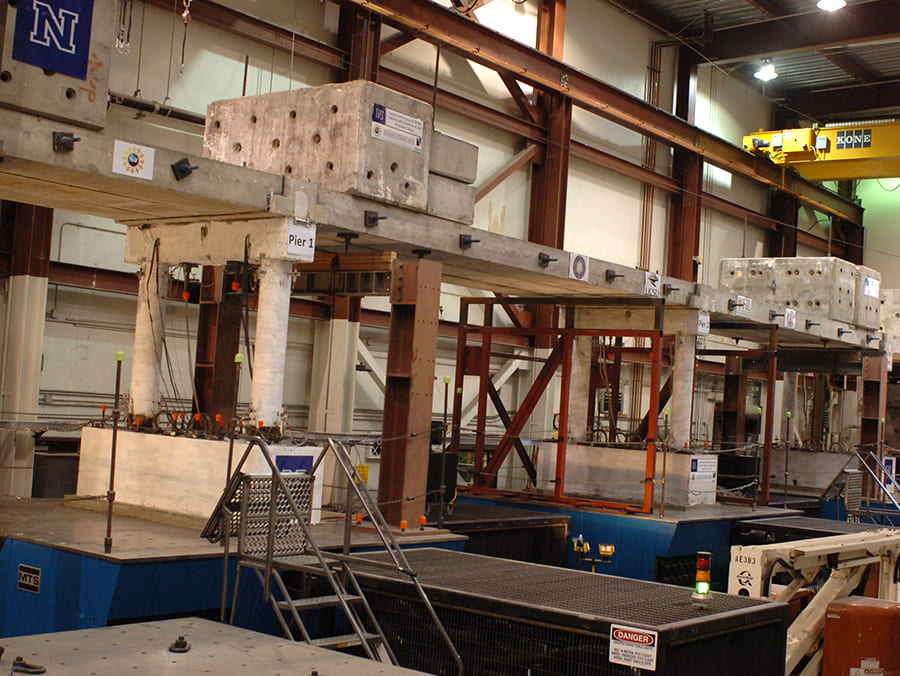 110-foot bridge destroyed in ‘quake’ at the University

At 11:04 a.m. on Dec. 11 a rumbling was heard at the east side of the University of Nevada, Reno as an “earthquake” shook a four-span 110-foot concrete bridge with motions comparable to an 8.0 earthquake. The bridge was in the University’s world famous earthquake simulation laboratory.

The experiment subjected the concrete bridge model to a series of seven earthquakes of increasing intensity. The final test applied motions and forces comparable to twice the acceleration intensity of the 1994 Northridge, Calif. earthquake. The Northridge earthquake had a "strong" moment magnitude of 6.7, and the ground acceleration was the highest ever instrumentally recorded in an urban area in North America.

News reporters from around the country covered the story. For example, National Public Radio ran the story complete with sounds of the three enormous 50-ton capacity shake tables rocking the 200 tons of concrete. As the shake tables moved, bridge columns swayed and cracked and small chunks of concrete fell off the structure. The 400 sensors relayed gigabytes of data as the 10-second quake stressed the quarter-scale model bridge.

This test is the largest of its kind in the United States. It is second of a series of three tests of materials and designs to make bridges safer. The first test in February 2007 used a standard design bridge of the same size and the third bridge test will continue the look at new innovative designs and materials.

The research project is under the direction of principle investigator and Professor M. “Saiid” Saiidi of the Civil and Environmental Engineering Department and research assistant Carlos Cruz is the lead doctoral student.

“There is no other facility in the country as big and with the equipment we have to conduct these types of tests,” Saiidi said. Sixty cubic yards of concrete and 16,000 pounds of steel were used in the construction. The model was constructed over many months in the University’s Rogers-Wiener Large-Scale Structures Laboratory.

The bridge is a test bed for cutting-edge construction technologies of the future with many of the new materials being tested in a bridge system for the first time. The UNR research team used nickel/titanium alloys, polyvinyl fibers mixed with cement, and rubber materials to potentially revolutionize seismic design of future bridges. The goal is to help protect lives, prevent damage and avoid bridge closure even when there’s a strong earthquake.

“These were all new designs, and we’ve learned they performed better than conventional construction,” Saiidi said. “Of the three new designs we tested, two of them had very little damage, we are quite pleased with the results so far.”

“To save lives bridges are made so they do not collapse, even though they are no longer usable,” Saiidi, said. “The question is, what is the impact of having to close numerous damaged bridges in a city like New York, Los Angeles or San Francisco at a time when these bridges are needed the most for fire trucks, ambulances, and other emergency vehicles?”

The experiment is part of a larger multi-university project funded by the National Science Foundation (NSF) under the George E. Brown Jr. (NEES) research program. Other UNR faculty involved in the $2.4 million project are Dr. I. Buckle and Dr. G. Pekcan. Researchers from U.C. Berkeley, U.C. San Diego, Florida International University, Georgia Tech, Stanford University, Kansas University and University of Illinois, Chicago, Tokyo Institute of Technology, and the University of Ljubljana have been involved in other aspects of the project.

The University integrates the shake table equipment into its research program, undergraduate and graduate assistantships and internships, high school summer camps, and K-12 outreach. The University also provides training opportunities for outside researchers through on-site courses and workshops.