May 18, 2022
By: Jamie Voyles, Ph.D.
Associate Professor of Biology, College of Science

In honor of Mental Health Awareness Month, the College of Science has asked researchers across a range of disciplines to share how they remain optimistic in the face of the many challenges of today, particularly within the field of science.

Many infectious diseases can fade away after initial outbreaks. Some examples from human history include bubonic plague, cholera, and influenza. The same phenomenon occurs for wildlife diseases as well. How does this happen? One popular explanation is that the pathogen evolves to become less deadly, so that it doesn't completely wipe out its hosts, ensuring pathogen survival. While this scenario does sometimes play out, we know that there are other reasons why the severity of diseases can change over time.

For amphibians (frogs, toads, salamanders), scientists have known about a highly lethal disease called "chytridiomycosis" since the 1990s. This disease was especially devastating in Panama, where it had a catastrophic effect on tropical amphibian assemblages. As a young graduate student, I was there to witness the outcomes of this severe disease. I was an eager, young graduate student that loved frogs. But starting in 2004, while working with a team of all men, we began to find amphibians that were severely sick and dying in our study sites. I scrambled to collect samples and isolate the fungal pathogen that was responsible for the die off. Not long after the outbreak, the amphibians of Panama, including a beloved, iconic species, the Panamanian Golden frogs (Atelopus varius and A. zeteki), vanished from the streams. These species, which were once considered a Panamanian national treasure, were soon rumored to be extinct from the rainforests of Panama. But knowing what I know now, I had reasons to be optimistic.

Fast forward many years. A new field crew had arrived in Panama: one comprised entirely of young women scientists from across North and Central America. It was a team driven by passion, curiosity, and a love of frogs.  We spent long hours surveying the sites where the Panamanian Golden Frogs had once been common. Locals would ask what we were doing on our knees looking under rocks along the stream, and many would reminisce about how much the forests have changed over the years.  As we kept up with our systematic surveys, we started finding frogs, even frogs that were whispered to be extinct. Our species lists grew longer, and one day, after trudging up muddy trails and slippery streams, we came across a bright yellow frog with a mosaic of black streaks and spots. It was – at long last – a Panamanian Golden frog!

Ultimately, our surveys revealed that several amphibian species are persisting, and even recovering, long after the lethal disease outbreaks that I had witnessed so many years ago. I wanted to understand how it was happening. Was it a change in the pathogen, the frogs, or both?

To answer these questions, our team of women scientists did two things. First, we collected samples from the frogs and the pathogen the same way the scientists before us did. Second, we headed to the laboratory to conduct experiments to empirically test for changes in the pathogen or in the frog samples that had been collected over time. We found that, nearly a decade after the outbreak, the pathogen was just as deadly for frog hosts in controlled laboratory experiments. In contrast, the frog samples (samples that were collected before the outbreak and during our recent surveys) indicated that the frogs now have better defenses against the pathogen, suggesting that Panama's frogs are fighting back against this deadly disease.

Our team of women scientists is now dedicated to research and education on the plight of amphibians, and we are deeply involved in local conservation efforts. When we arrive in Panama, the locals call out, “llegaron las chicas ranas!” (the frog girls arrived!). Our research has been important for providing key insights into disease ecology and how infectious diseases change over time. However, it is also unique because of the team of scientists that have been working to understand what is happening with the frogs – it is women scientists that are shining a light on how this disease works, on the amazing biodiversity of the tropics, and on the local communities that want to protect the natural world around them. Most importantly, they are inspiring another generation of eager, young girls that might want to grow up to study frogs. Seeing their passion provides even more reason to have hope in our planet’s future, with women-led science.

Jamie Voyles is an associate professor in the Department of Biology and the Co-Director of the Amphibian Resilience Institute. Voyles studies emerging infectious diseases in frogs and conservation of the frogs vulnerable to infectious diseases such as chytrid fungus. Voyles is also passionate about helping more women become a part of STEM fields. Voyles’s STEM Sisters program provides an opportunity for underrepresented high school girls to learn about science at the college level, and she hopes to take students to a field site in Panama in the near future. 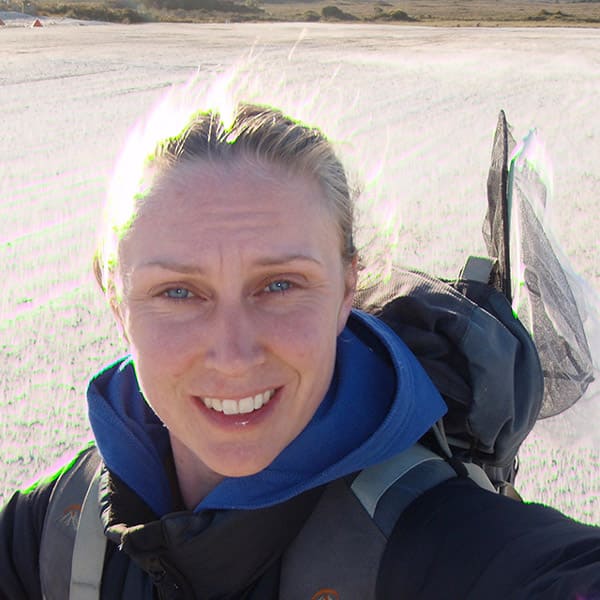