I soon need to take a leap of faith. This is my last year at the University of Nevada, Reno, and already people are asking me, “What's next?” I’m not sure where I will go, but I have experience leaping. I was eighteen when I “ran away” from home. I say “ran away” because I didn’t really run away - I was a legal adult, and I only left after confirming that my dad would be alright without a car for the summer (“What would happen if I ‘hypothetically’ borrowed your car for a summer, dad?"). He was surprisingly supportive, but had the condition of constant check-ins, lots of pictures along the way, and of course - to not say anything to my mom. And so I leapt. I pooled all of the money that I had after eighteen years of birthdays and Christmas cards and headed north on I-5. Before I knew it, I was backpacking across the Olympic National Forest, taking lessons on paragliding, crossing the international border into Canada on a ferry, then even navigating in the cockpits of several small planes to learn how to fly. I met world travelers and homestead owners, mucked horse stalls and drove tractors. I smoked salmon and drank with eclectic sailors; but most importantly, I learned what kind of person I wanted to be.

I was born and raised in Reno, and while I was an excellent student as a kid, I was miserable because I felt trapped. Everything I had achieved up until I graduated had been for the sake of my parents. I just wanted to make them proud. My parents both come from working class backgrounds, both of them kids of divorce who had to work for everything they have now. Their stories are success stories, ones where they were able to create better lives for themselves through putting their noses to the grindstone.

Everyone and their mom talks about the dangers of traveling alone, especially as a woman. Not every experience was a good one. But what they don’t tell you is that many times, your worst enemy is you. You learn, while being alone, that you have to have confidence in your own decisions. I learned the difference between taking risks (good) and being reckless (bad). I learned that fear is good because it keeps you safe, but that unnecessary fear gets in the way of incredible experiences.

My mom is a first-generation immigrant from Peru and still has the work ethic of someone who has had to fight to survive in a country that has not always been forgiving. From her, I inherited her stubbornness and grit. My dad is the youngest of three who grew up in rural Nevada and inched his way through his schooling by working graveyard shifts at casinos. From him, I inherited his patience and love of learning. They met on the University of Nevada, Reno campus and essentially never left, working their way up the education ladder to professional positions and out of the working class. They worked hard to instill those values in my brother and me, and their perseverance set the bar high. We had the extracurricular opportunities that my parents did not have growing up, and soon thereafter, the expectation that we would excel in all of them. Piano festivals, soccer tournaments, math competitions, everything. From a young age, I saw how hard my parents worked to give us these opportunities, and so I set the bar even higher for myself to be a good role model for my brother. I made decisions for myself based on what I felt was best for my family’s future, and I was praised by my Peruvian family for doing so. In those tight-knit Latino circles, I wasn’t really asked what I wanted to do with my life, because individualism isn’t really seen as a good value to have. I was just told to go to school and do well so that I could support my family. To them, the families that stick together, succeed together. Selflessness is an excellent quality to have. Individualism is selfish.

I was scared of failure in school because I thought that my parents wanted more from me than was achievable. I didn’t understand that my parents pushed me so that I could see how far I could push my own limits. They saw my potential, saw that I could take what they were giving to me and create something even better for myself. They weren’t forcing me to become them, they were teaching me the tools I needed to make my own decisions for my own life. They probably weren’t expecting that I would take those skills and quite literally run with them, but it was only when I “ran away” that I was able to see that I had those skills to begin with. I returned from that trip very grimy and with zeros in my bank account, but a deeper understanding of just what I can do with determination, hard work and no fear.

So here I am, exactly four years later. Since then, I have thrown myself into my degrees, Geography B.S. and Spanish B.A., two paths that I have chosen for myself. I’ve been able to travel and study abroad through the University, and I have several adventures waiting for me this year in the form of conferences, panels and research projects. When the year is over and I’ve graduated, I’ll just need to leap again. I’ve already done it once, so I know I can do it again. 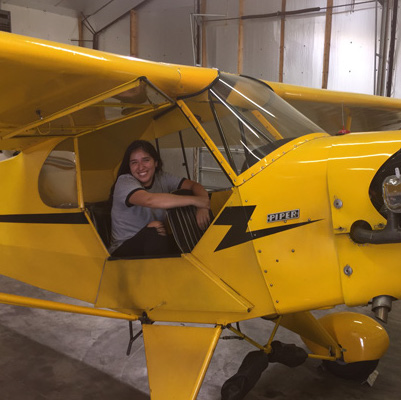