Celebrating the 10th Anniversary of DACA

The Deferred Action for Childhood Arrivals program (DACA) celebrates its 10th anniversary June 15, 2022. The policy established on June 15, 2012, provided more than 800,000 individuals with work authorization, temporary protections from deportation and other opportunities to further their careers and pursue educational goals at higher education institutions, such as the University of Nevada, Reno.

As the social services coordinator on campus, I have the opportunity to interact and provide support to current and prospective students that have DACA, are undocumented or are in mixed-status families. Whether students need assistance with DACA renewal, financial aid, mental health or on-campus and community resources, the Undocupack office is a place that they can go to for help.

While we celebrate the anniversary of DACA, it is important to know that 181,000 students with DACA are currently enrolled in higher education, and that nearly one-third of all DACA recipients are essential workers, such as doctors, nurses, farmworkers and food service providers, all making a positive impact in this nation, every day. DACA has expanded opportunities, and it has helped change the lives of individuals and their families.

I clearly remember the day a student walked into my office and sat the chair in front of me, uncertain about their future and the future of their family. My question upon meeting with them was “what brings you in today, and how can I help?” The student responded by telling me that they had submitted their DACA renewal but were afraid it wasn’t going to arrive in time to submit the work authorization to their employer or to provide it for their paid internship, which was a requirement for them to graduate.

They then told me that they were facing hardships at home and that the student’s income was helping the family get by during this challenging time. The student expressed that they were not sure how they would be able to help their family without a job and that the employer was going to ask them for the renewal soon. They were also questioning if they would even be able to graduate in the spring. The student expressed feeling afraid, worried and frustrated and thinking the worst outcome might come true.

Thankfully, the outcome of the student’s situation turned out positive. They were able to provide proof to their employer of the work authorization, they completed their internship, and they also graduated from UNR this past May. Just a few weeks ago, I received an email update from them letting me know that they had been hired into a position within their career path.

This is one of the many stories that depict just how much having DACA can impact the lives of individuals and their loved ones. The matter of the truth is that undocumented folk constantly experience uncertainty and fear due to their immigration status. Individuals, who have lived in the United States practically their entire lives, grew up in communities they call home, studied in local schools, and celebrated their birthdays and holidays for many years in this country, face constant uncertainty, ongoing barriers and challenges due to status. In fact, many individuals are not aware of their undocumented status until they get to the age where they can apply for a driver’s license and realize that they are unable to do so or have to go through a different process.

The Future of DACA

DACA has provided a sense of stability for individuals as they can invest in themselves and their communities more fully, without the fear of being separated from the only home that they know and their families. In the United States today, there are a total of 427,000 undocumented students enrolled in higher education, 181,000 who have DACA and 246,000 who do not have it. There are also students pursuing careers, who have gone out into the world and made a positive difference in this country; yet, they have no protections or work authorization. There are also more than 800,000 DACA recipients who live with the uncertainty of what the future holds for this program.

In July of 2021, a hold was placed on the program when a federal judge in Texas ruled DACA unlawful. Since then, the federal government has appealed this decision in the Fifth Circuit Court of Appeals, and now almost a year later, an oral argument has been scheduled for July 6, 2022. As of right now, current DACA recipients can continue to renew their DACA. However, as of July 2021, first-time applicants and anyone whose DACA expired more than a year ago will not have their application processed by United States Citizenship and Immigration Services.

DACA has been transformative, but there needs to be a solution that isn’t temporary, one that creates a world in which individuals do not have to live with the uncertainty of not knowing if the policy will change at any given moment. We can contribute as a community by advocating for the passage of legislation by Congress that includes a pathway to citizenship for undocumented folk nationally. There needs to be permanent solution for individuals who contribute to this country and call it home.

At the University of Nevada, Reno, we can support undocumented and DACA students by becoming more involved in creating a sense of belonging within campus. As allies, we will never fully understand what they experience and go through, but we can be there as a support system. Creating a culturally inclusive space is important, as status is a very personal thing, and many times students won’t feel comfortable with disclosing.

Being mindful that undocumented students may be sitting in your classroom and making them feel welcomed is important. Many of them may feel isolated because they think that no one understands and that they are the only ones experiencing this constant uncertainty and fear. Providing a welcoming space also means not directly asking them about their immigration status and letting them disclose it only if they choose to themselves.

Taking these small steps can make a big difference for our DACA and undocumented students. It can remind them that home is here and there are allies on this campus who are with them.

Janet Najera was born and raised in Reno, Nevada, and graduated from the University of Nevada, Reno as a first generation Latina. While she was born and raised in Nevada, she considers Aguascalientes, Mexico, to be a second home to her due to her family history and upbringing. Before transitioning into this role, she worked in family engagement providing support to families from diverse backgrounds. Her background experience includes working with DACA, undocumented and mixed status families within the K-12 system and working in court ordered rehabilitation treatment programs, crisis intervention, special education, and diverse student mentorship. 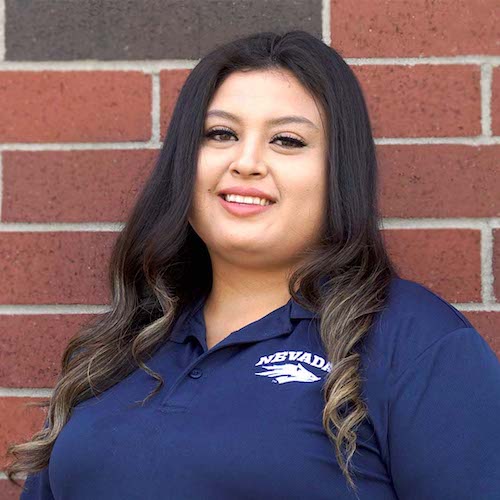