The greatest accomplishment of all

Contrary to popular belief, the week leading up to college graduation sucks. At least that was the way I felt just recently as I prepared to undergo arguably one of the most important ceremonies of my life. Whether it be a current student, recent alumnus or someone who graduated decades ago, I write this in hopes that my story resonates with someone who also felt disheartened by this supposedly momentous event.

The week started out as any other, looming deadlines, aggravating roommates, and more tasks on my to-do list than I’d like to admit. But as the days rolled on and my friends began to get excited for graduation weekend, all I felt was dread. I dreaded that it wouldn’t be as perfect as I always imagined. I dreaded that I hadn’t seen or done all that I’d wanted to in college. Most of all, I dreaded dreading graduation because I didn’t want to sour any memories of the occasion. As I settled with conflicted feelings of sadness, excitement, anger, and nostalgia I couldn’t help but become overwhelmed at the very thought of walking across the Lawlor stage. It was all too much too soon. Perhaps it was the fact that the COVID-19 pandemic changed the way I thought about important milestones. Maybe it was the realization that, as a first-generation college student, my family doesn’t always understand how much work goes into a college degree. Or perhaps it was the simple truth that nobody likes Winter Commencement. Whatever the reason, I was not feeling like a soon-to-be graduate with three bachelor’s degrees.

Naturally, I did what any rational, slightly self-absorbed college student would do: I threw a party. I didn’t throw the “get wasted with a bunch of total strangers” party, but the “surrounded by ten of your closest friends who love you and want you to succeed” kind of party. As I sat on my living room couch watching some of the best people I had ever met mingle and have fun, the weight (and emotions) of graduation hit me like a brick. And while I cherish my myriad accomplishments over the course of my undergraduate career, it was in that moment that I realized my biggest accomplishment yet – that I had enclosed myself within a circle of genuine human beings. I thought about the memories of late-night Dutch Bros runs with my freshman year roommate. I thought about the way my best friend always knows just what to say during one of my many breakdowns. I thought about the community of first-generation, working-class students that I struggled and succeeded with. And I thought about the encouragement I received from friends when graduate school applications (because apparently I haven’t gone to school long enough) became too stressful.

As I move onto the next phase of my life, I leave Nevada knowing that I made lifelong friends who will always be in my corner. If there is any advice I can give to future graduates it would be to keep in mind, and heart, the people who supported you through it all. At the end of the day, those people might just be your greatest accomplishment of all. 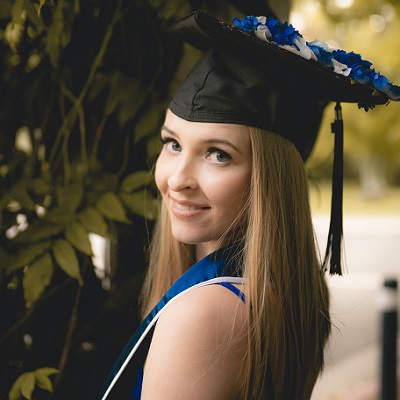