'A great town for art and music:' reflecting on the Reno Jazz Festival and a musical life

Now in his last year at the University, Larry Engstrom looks back at the canceled Reno Jazz Festival and his time as a musician and educator.

It was a sad day this past Wednesday when I learned that the Reno Jazz Festival won’t be happening this year. This being my last year at the University, the news made me stop and reflect on my career as a musician and an educator.

I think I did my first gig where somebody gave me money when I was in the eighth grade, and I’ve been hooked ever since. I moved to Reno in 1987, and I’ve been a professor of music and served as director of the School of the Arts and chair of the music department. I also ran the Reno Jazz Festival for 25 years. During that time, I’ve had the pleasure of being involved in Reno’s vibrant live music scene, where I got to perform with the likes of Frank Sinatra, Sammy Davis Jr., Ray Charles, the Smothers Brothers and many more incredible musicians.

Reno is still a great town for live music, but it was something else back in those days. I was playing in the Harrah’s Orchestra six nights a week. On my off day, I played in the Reno Philharmonic, and I had a pretty active brass quintet and a jazz quintet. I’d wake up around 7:00 in the morning, spend all day on campus, head home for about an hour, eat a quick dinner, get in the car and drive up to South Lake, play all night, get home around 2:30 in the morning and do it all again the next day. The schedule was demanding, but it never felt like a chore because I was doing what I love.

That’s not to say there weren’t times I would have liked to just stay home. I remember one Christmas Eve, my second daughter had just been born less than a week before, and this performer named Charo was doing a two-week run at Harrah’s. She wasn’t really my favorite performer, so I really didn’t want to play already. On top of that, I’ve got a newborn, a house full of family from out of town, it’s Christmas Eve, and it’s snowing like crazy. Sure enough, right about the time I needed to leave to get to work, there’s a lull in the storm. I called my boss, and he says, “You gotta come.” So I threw on the chains and drove up the pass. That’s just how it was back then.

That was rare, though. Usually, I was driving up during the evening, and I got to watch the sun go down over the lake almost every day. It was a great time to be a musician in Reno. You could make decent money and have a family because you didn’t have to tour. It helped the University recruit some great talent, too, because they could make money on the side while they went to school.

A lot of people view the old Reno as seedy and dirty. It’s attention grabbing to talk about the shady stuff, but that wasn’t the Reno I knew. What I remember is you could go out any night of the week and see great live music in one of the show rooms. People were friendly, and everyone was having a good time. I think that’s a part of the old Reno that’s alive and well. I’m proud to have been a part of that. I’m sad that there won’t be a Jazz Festival for my last year at the University, but that’s life. It will be back next year, and Reno will keep changing and growing. Whatever happens, I think Reno will always be a great town for art and music. 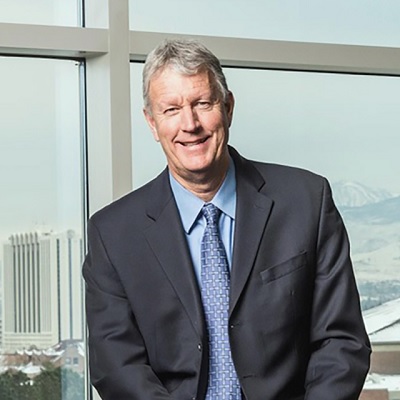 By: Larry Engstrom, D.M.A.
Professor of music and trumpet