Good grief! Growing toward graduation at the University

If I told myself two and a half years ago that I would be graduating with my bachelor of arts in English writing and completing my professional internship with the Office of Marketing and Communication this December, I would be so astonished – I wouldn’t even recognize myself.

I enrolled at the University in Fall 2016 with the intent to obtain my bachelor of science in forest management because I loved reading work by Gary Snyder, Wendell Berry and John Keats. As a student who had taken numerous AP courses, been in the Gifted and Talented Program and skipped ahead in elementary school, I felt pressured to pursue a career in STEM. Furthermore, I was determined to pursue a degree in STEM because I would have job security and free time to write about my experiences.

The summer before my freshman year, my grandfather, Michael Cleveland, who was once chair of the music department, passed away. I was taking an arts course in the Church Fine Arts building, and it was comforting in an odd way to pass by my grandfather’s office twice weekly. I was a bundle of grief, and the shock helped me pass my classes. Eventually, the shock wore off, and after the holidays I was emotionally and mentally drained.

I increasingly felt like I didn’t belong on campus that spring. I remember, one of the few times I actually went to class, I was walking on campus, and everyone was passing by me, which caused a dizzying effect. I felt so overwhelmed. I made it to class, but I couldn’t motivate myself to go in. I spent a lot of time ‘attempting’ to attend that semester.

After completing my freshman year with a well-deserved .729 GPA, I decided that I wouldn’t enroll in classes for the fall. I had lost my scholarships. I had severely disappointed my parents. And worst of all, I was determined to do everything on my own.

During that summer my parents encouraged me to take the time to figure out a career path I was passionate about. I picked up lots of different hobbies. I started to journal, and I spent a lot of time hiking and rock climbing around Reno. I made it a goal to attend as many different events as I could.

At a concert that August, I met some people my age, and during simple-small talk, it happened: I lied.

I told them that I was a writing major at the University of Nevada, Reno.

Because of that lie, I knew what I wanted to do; I wanted to manifest it. I went home, logged onto MyNevada and used the planner function to see what classes I could take that fall. I then officially changed my major to English writing with a College of Liberal Arts advisor and created a graduation plan.

In my first week back, I met my boyfriend, saw my cousin Jack attend his first day at the University and went to two ASUN events: a club fair and the pancake feed. During the rest of the year, I stepped out of my comfort zone by making friends in my classes, and I discovered that I love writing poetry and prose-y creative nonfiction.

For one of my writing workshops, I wanted to create stories around my family’s history, and filtering through documents, I came across a draft of my grandfather’s statement of purpose. I learned that he had wanted to study English, so, in a sense, I was writing part of my grandfather’s unlived story through my own actions.

For once in my college-career, I began to feel like my work was valuable, and I became invested in pushing myself to learn as much as I could. It wasn’t always easy. After many writing workshops, I cried in my car like a toddler throwing a tantrum, as I reviewed some particularly harsh criticisms. But I let those tough experiences fuel me to work harder and write more. I became so fixated on learning that I began taking winter and summer courses. Ultimately, it became a goal of mine to see if I could graduate earlier than I had initially planned, so I could spend more time learning about writing.

At the end of my sophomore year, in the spring of 2018, I began working as a student intern for the University’s Office of Marketing and Communication. In my position, I was able to see professional applications of writing. It helped reassure me that there are in fact job options with a liberal arts degree.

As a student intern, I helped write, pitch and contribute content to Nevada Today. I interviewed and wrote stories about many fascinating professors, administrative faculty and students. I also helped compile and archive reports of every daily mention of the University in the media. Additionally, I helped cover events on social media, such as commencements and MSNBC Live. I never would have imagined I would be writing for and actively promoting the University, but I love it! I made friends with other interns, several of whom were journalism students who taught me more about journalistic writing.

Attending content and staff meetings helped me understand more about the University. A few months ago we had an open discussion about the results of the Campus Climate Survey. We discussed potential ways to remedy the problems and how we felt about the results. I personally related to the students who had considered leaving the University for lacking a sense of belonging.

I had left the University because of those feelings, but since re-enrolling, I’ve been fortunate to create my own supportive community of family, friends and coworkers. They’ve cheered me on as I’ve made the Dean’s List, taken on extra credits, given readings of my poems and had my poetry published. They’ve also supported me when I’ve had challenging critiques in writing workshops and faced rejection from publications. Most importantly, they’ve motivated me through my final semester, which has been by far the most challenging.

The second week of this semester my cousin Jack passed away. It hasn’t been easy to manage grief and the stress of graduating, but I now know of so many services that are provided through the University, such as the free counseling services. I wish I had known to seek help when I was first starting out at the University. I’m so lucky to have my community, who have continued to inspire me to push myself through this final semester and graduate early.

I’m very proud that I’m graduating from this University with a degree in something I love and professional work experience that will help launch me into my career. It would’ve been impossible to have grown into the person I am today on my own.  My accomplishments belong not just to myself, but to everyone who has influenced me, through tribulation and joy, and to those who are no longer around but nonetheless helped me along the way. 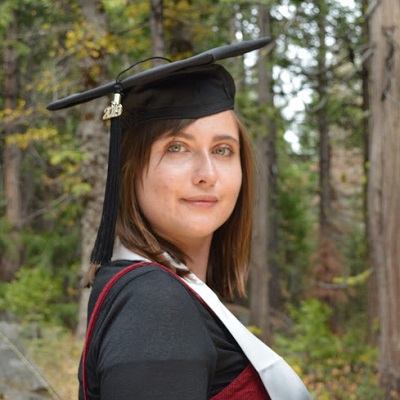