From LimeBikes to new bike lanes and a whole lot more, great things are happening for cyclists on campus.

A new academic year has begun, and we hope lots of you will get the chance to bike to campus this semester!

The Bicycle Working Group has been busy of late – read on for some campus cycling highlights:

We are delighted to announce that RTC Washoe and the City of Reno both unanimously voted to approve construction of a two-way, physically separated cycle track along Center Street between the University and Midtown! Pending final approval at an RTC Board meeting this fall, the track will likely be installed during summer 2020. 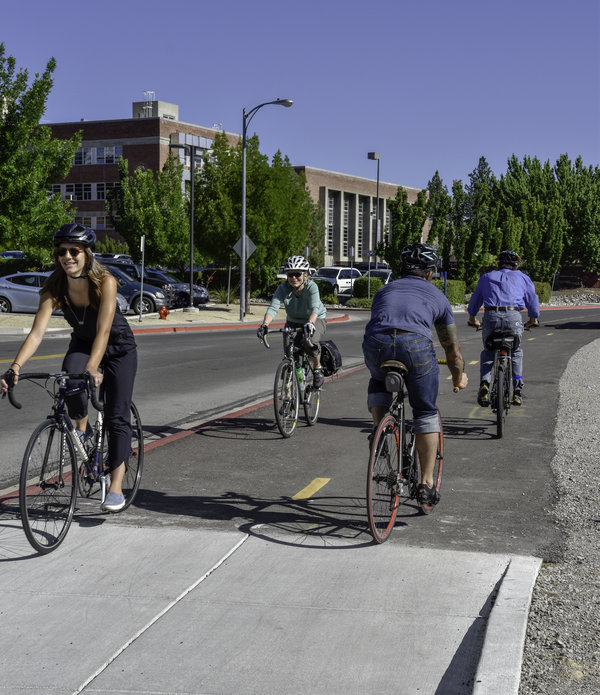 At the Reno City Council meeting on August 22, Reno Vice Mayor Neoma Jardon said it best: “This opens up a completely new segment of riders and connectivity with the University that currently we just don’t have.” We are grateful to Provost Kevin Carman for his early public support of this project, to the City of Reno and RTC Washoe leaders and staff who have ushered it along, and to the dedicated riders and volunteer advocates who gave their time and input to this effort.

Evans Avenue is looking a little different these days. This year, a bike lane was added along Evans from 4th Street up to Jodi Drive, where the lane merges with a shared-use path. This path is shared with pedestrians, so cyclists should slow down, call out or use a bell when passing and yield to those on foot. Likewise, motorists parking on the inside of the bike lane should take care to watch out for cyclists and wait for them to pass before opening car doors. The Bicycle Working Group is working with residents of the adjacent neighborhood to make sure this new infrastructure doesn’t ruffle any feathers. We hope you’re able to take your bike out for a spin on these new lanes! Note that engineering building construction may affect this route intermittently.

Looking for an excuse to get off the saddle and stretch your legs? Look no further! Designated walk zones have been added to the campus bicycle map (available at the JCSU welcome desk) to indicate areas where cyclists must dismount and walk their bikes, and signage indicating the walk zone boundaries will be installed this semester. These areas include the east side of Hilliard Plaza and the sidewalks in front of the MIKC and the JCSU. These are areas with high pedestrian traffic, and there are always bike routes around the walk zones so you won’t be forced off your bike if you’re just passing through. Cyclists, it’s imperative that you respect these walk zones and do your part to make our whole campus welcoming for pedestrians. If you have any questions, contact the Bicycle Working Group.

You’ve probably noticed a bunch of bright green bikes parked around town, but did you know you can take one for a spin? LimeBikes are available for all to use (once you download their free app, you can unlock any bike for 30 minutes for $1), so if you don’t have a bike but you’d like to get a feel for riding around campus and Reno, here’s your shot. LimeBike users should park their bikes at established bike racks on campus and should never block travelways. LimeBikers are subject to all the usual campus bicycling policies, so be safe and be nice!

The Department of Geography’s Dr. Scott Kelley recently wrapped up a study in which more than 50 bike commuters used Strava to track their routes to and around campus for two weeks to determine how chosen travel paths correspond with established bike routes. One of the most significant findings was that only 25% of total miles traveled off-campus by UNR commuters were via bicycle lanes (read: if you’re struggling to find a route to campus along continuous bike lanes, you’re not alone!). Dr. Kelley has submitted a paper based on this research to the Transportation Research Board, and we’ll share that when it’s published.

Meanwhile, the Department of Civil & Environmental Engineering’s Dr. Hao Xu has been measuring traffic flows and monitoring bike-ped interactions on campus using video and LiDAR technology, and he plans to extend his LiDAR technique to monitor the trajectories of all road users at strategic intersections throughout Nevada. Measuring trajectories with LiDAR is superior to using cameras because LiDAR isn’t dependent on light conditions, and it also captures speed and velocity data that can be transferred to smart and connected infrastructure. Dr. Xu’s pilot data collection was essential in defining the new campus walk zones described above---talk about a local impact!

Learn more about biking to and around campus. We’ll see you on the road!

Joanna Trieger is a technical writer in the College of Engineering, a member of the University’s Bicycle Working Group, and a volunteer with the Truckee Meadows Bicycle Alliance. She has been commuting by bike since 2011. 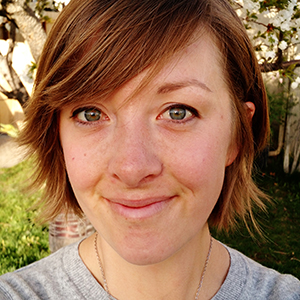