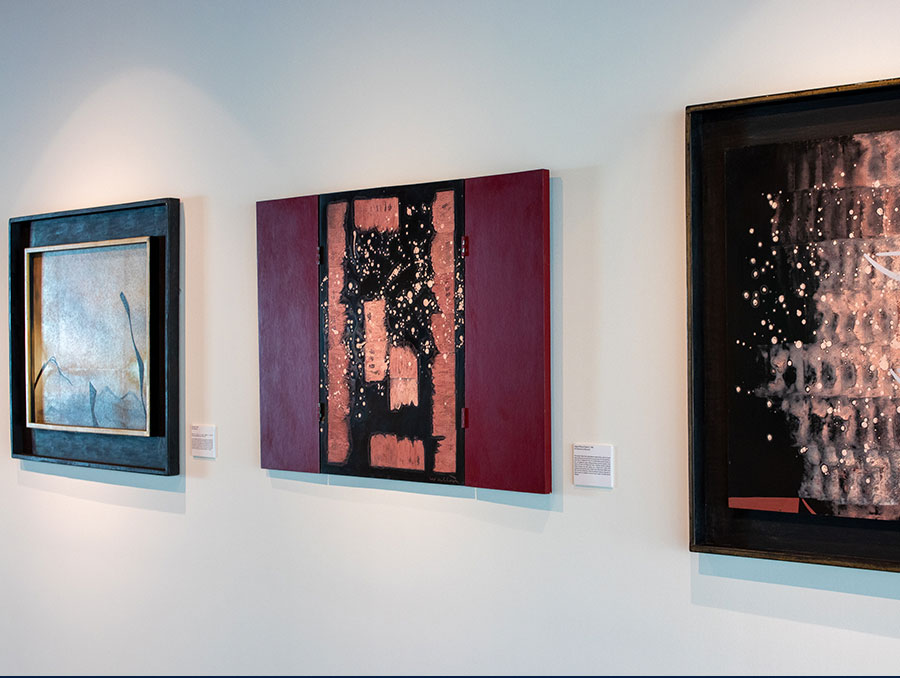 The John and Geraldine Lilley Museum of Art at the University of Nevada, Reno recently opened its newest art exhibition, “A Nevada Life: Richard Guy Walton.” The exhibition is open now through April 24 and can be viewed in the Front Door Gallery of the Church Fine Arts building daily from 8 a.m. – 7 p.m. The exhibition is free and open to the public.

Guest Curator, Anthony Shafton is the author of the book “A Nevada Life: Richard Guy Walton.” He depicts the book in this retrospective exhibition. Each piece was selected to illustrate Walton’s range of styles.

When visiting the Front Door Gallery, guests are immediately welcomed by Walton’s unique depictions of space, place, and time. Human drawings with un-humanistic features provide guests with a sense the life Walton lived. Further down the wall, abstract oil paintings stand to show futuristic ideas of place and exude an idea of Walton’s experience with world travel and his imaginative sense of what those places could be.

Some work is dark, layered with an aura of despair, and other larger paintings on the wall opposite display with striking splashes of color and design. A pair of teal-colored paintings, one titled “Under the Sea,” makes one wonder if Walton’s was viewing the world from below, until instantly the guest is swept forward toward space again, experiencing a future galaxy in another time period.

“A goal of this exhibition is to reintroduce the public and the arts community to Walton, who deserves renewed attention for the quality of his work and his role in Nevada’s cultural history,” Shafton said.

Richard Guy Walton (1914-2005) was born in San Francisco, raised in Stockton, Calif. and came to Reno at age 15. Following a short stint at Chouinard Art Institute in Los Angeles, he returned to Reno in 1935 when he joined the Works Progress Administration’s (WPA) Federal Art Project under artist Robert Caples, who became a close friend. Walton lived the rest of his life in Reno and Virginia City.

By 1945, Walton had evolved to become Nevada’s first dedicated abstract artist. He once called his approach abstract symbolism: the symbolic treatment of figurative subjects. In his mid-70s, he wrote in a letter:

I have seen painting as a matter of the need of the subject at hand. Method and style were never a problem for me, I mastered many styles and invented most of those I used. I never looked at a subject or an idea and thought, ‘Now what style should be used?’ Hell, I made up a new style as I painted. Perhaps, I’d have a run of stuff in that manner, and perhaps not; I bore myself easily.

In 1993 and 1994, the Nevada Museum of Art gave Richard Guy Walton an unprecedented series of three retrospective exhibitions for works in different media. The catalogue of the oils retrospective called him “the preeminent ‘Grand Old Man’ of abstract art in Nevada.”

According to Shafton, Walton was rarely at a loss for self-confidence and regarded himself as an artist of national, if not world, stature. Yet, he never positioned himself to advance in the art world. He stuck to Nevada and a semi-rural lifestyle. “I’m a plain product of this American experience,” he said. “And I can’t shake it.”