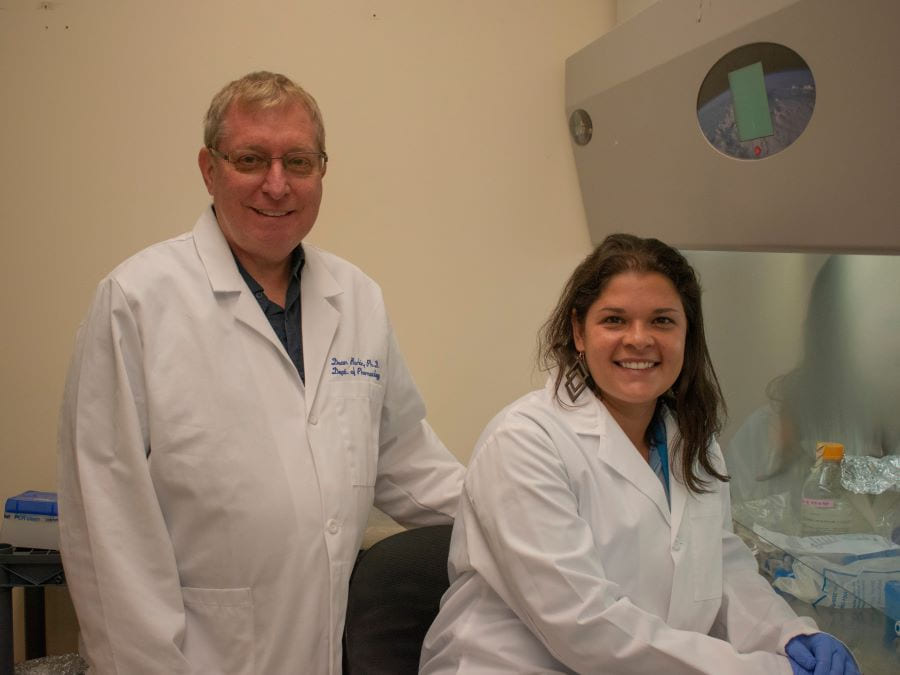 Affecting one in 5,000 male births worldwide, Duchenne Muscular Dystrophy (DMD) is a fatal genetic disorder that currently doesn’t have a cure, but published research conducted at the University of Nevada, Reno School of Medicine shows promise and may lead to the eventual development of a new molecular therapeutic.

The latest, significant research finding, published in Human Molecular Genetics, February 2022, involves the small-molecule sunitinib which has been shown to mitigate DMD-related skeletal muscle disease in a number of ways.

As patients with DMD grow older, muscular dystrophy worsens, causing respiratory and cardiac muscle failure resulting in premature death. There are no effective treatments to prevent DMD-related cardiac failure, however continued research in the lab of UNR Med Professor of Pharmacology Dean Burkin is pointing to protein and molecular-based solutions, including sunitinib which is already FDA approved and used in cancer treatments.

Burkin conducted the latest research with Ph.D. student Ariany Oliveira-Santos. Based on a mouse model, they found that sunitinib improved major negative symptoms that stem from DMD, such as cardiac muscle damage, without depressing the immune system completely. Oliveira-Santos was lead author on the published results. The study was supported by a grant from the Muscular Dystrophy Association and the National Institutes of Health.

The ‘bench to bedside’ approach

“We’re interested in the biology of the α7β1 integrin, that's really the central focus of [our research],” Burkin said. “But we also have other big interests in these muscle diseases where the integrin [protein] is normally found.”

Burkin explains that through this translational research, which he also calls the “lab bench to bedside” approach, researchers attempt to understand the biology of a system as much as possible, and then continue through the development steps that lead to therapeutic treatments.

Patients with DMD lack dystrophin which causes progressive muscle degeneration and weakness. This means the more these muscles are used, the more damage occurs. While there are repair cells in muscles, these cells eventually tire out. Burkin and Oliveira-Santos noted that the heart, an organ being used all the time, does not have this repair system, making the damage severe in cardiac muscles as well. Currently some therapeutic approaches have been beneficial for skeletal muscles but not for the heart; therefore, it’s important to have a drug or treatment that can “target and be beneficial to skeletal and cardiac muscle at the same time,” Oliveira-Santos explained.

“We looked to the electrical and mechanical function of the heart and both were improved,” Oliveira-Santos said. “Sunitinib helped the cardiac function [and reduced] cardiac damage, and inflammation. I don't think there’s really many drugs out there that do that right now.”

‘I always wanted to be a scientist’

Oliveira-Santos remembers wanting to be a scientist as early as eight years old. She went on to earn degrees in Brazil, including a bachelor’s in biomedicine and a master’s in the scientific fields of immunology and pharmacology as they relate to transplant rejection. While earning her master’s degree, Burkin was invited to Brazil by Oliveira-Santos’s supervisor to give a talk, and the two met in-person and discussed her master’s project. At the time, they were studying the same molecule, but in different models, so Oliveira-Santos had read some of Burkin’s papers.

Oliveira-Santos had always been interested in the physiology and pathology of disease and thought it would be a great area to study for a doctoral degree. She knew Burkin was working in this field, so about five years after their in-person meeting, Oliveira-Santos reached out to Burkin. He told her about an open position in his lab for a Ph.D. student, and their project of understanding the role of an FDA-approved small molecule for the treatment of DMD cardiomyopathy. She felt this project was a good match for what she was looking for and joined the lab in January 2019.

Oliveira-Santos said the mentorship and support she’s received from Burkin and the rest of the lab has been invaluable.

“Dean is always available to discuss and very happy to help [the lab members] with everything we need,” Oliveira-Santos said. “Everyone had an important opinion about the project and that was essential for the project’s success.”

While working in science oftentimes can come with struggles, Oliveira-Santos expressed how much these experiences have taught her.

“Being in science is a big challenge, because you have to learn how to deal with problems all the time,” she said. “There are more failures than success [so] it teaches you how to deal with failure. Failure is normal. You just need to try to find a way around to get a solution.”

Oliveira-Santos is set to finish her Ph.D. in Cellular and Molecular Pharmacology & Physiology in the fall 2022.

“When I bring a student to the lab, I say ‘I can supply everything but enthusiasm.’ And that's one thing that Ariany brings in abundance,” Burkin said. “I'm putting my students in contact with other principal investigators that I know to try and make sure that the next level on their career is achieved. She can go anywhere right now and move forward. The world is her oyster.”