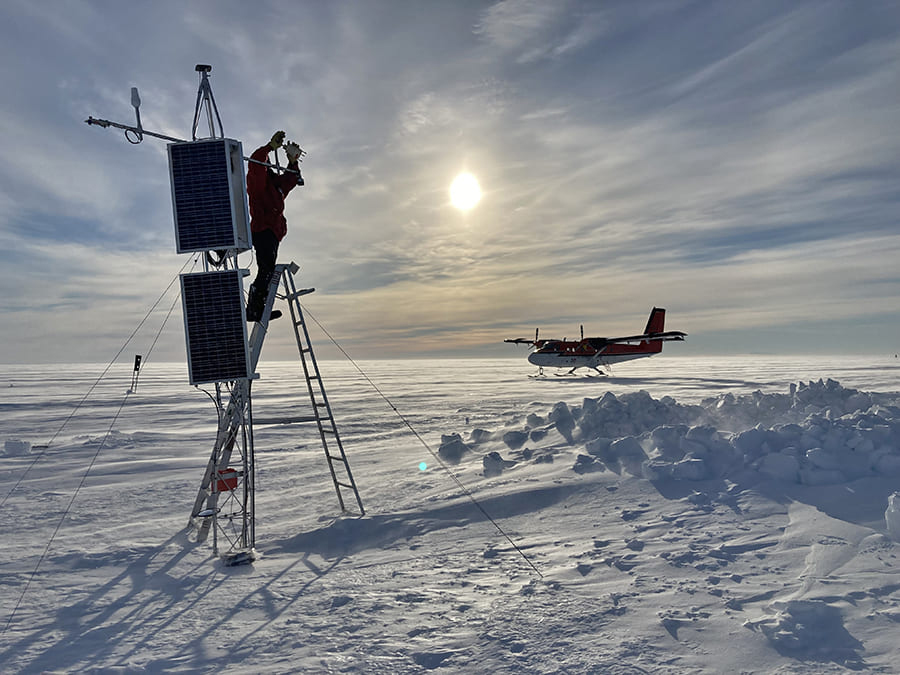 The Thwaites Glacier in West Antarctica is eroding back from the ocean and flowing faster with each year, threatening to retreat and collapse within decades to a few centuries.  If it does, it will potentially draw much of the West Antarctic Ice Sheet with it.  The region has enough ice to raise the level of the ocean by as much as 10 feet. College of Science professor Scott Tyler, along with his laboratory manager Chris Kratt, are working with an international team of scientists to determine just how soon that could happen.

“Based on the most recent work, the floating portion of the Thwaites Glacier could break apart in as little as three to five years,” said Tyler, a hydrologist and team member of the International Thwaites Glacier Collaboration or ITGC. “After that, there is little holding back the glacier and the rest of the ice in West Antarctica from melting into the ocean, and could lead eventually to significant global sea level increases. How long that will take is still an open scientific question, but we are not talking geologic time here, rather its decades to centuries and coastal communities will have to mitigate and make decisions in the next years to decades.

“Our work aims to narrow the timing window so we know what to expect and can make effective and efficient plans for how to protect the critical infrastructure along our coastlines, such as cities, shipping ports, petrochemical facilities and even sewage treatment plants, many of which are located at the present coastlines.”

To put the size of the glacier in perspective, it is a bit bigger than Florida. It is more than a mile thick on average, some of it above the waterline and some below.  The ITGC is an international project with support from the United States’ National Science Foundation and the United Kingdom’s National Environmental Research Council, and involves an international team of about 100 scientists and engineers seeking to unfold the mystery of the glacier, now nicknamed by some “Doomsday Glacier.”

“The incursion of warm sea water is the culprit that could lead to unplugging the cork that’s holding back the mass of snow and ice from entering the ocean,” Kratt said.

The team is focusing on the 60-kilometer-wide ice shelf at the front end of the Thwaites Glacier, which extends beyond the shoreline of Antarctica and forms a 800-foot-thick floating ice shelf on the Amundsen Sea.

Tyler and Kratt use cutting-edge laser technology to monitor both temperature and vibration in a nearly mile-long fiber-optic cable that was installed through the ice shelf into the ocean below. The cable acts as a thermometer, continuously measuring the temperature about every 20 inches in both the ice and water. This allows the team to monitor the thickness of the ice shelf and the tidal flow and incursion of warm water under the floating shelf. The vibration monitoring is a pilot study that will continue later this year.

Tyler and Kratt, who are both in the Department of Geological Sciences and Engineering, began working with the International Thwaites Glacier Collaboration in 2019, bringing their experience with fiber-optic Distributed-Temperature-Sensing technology to the project. Tyler had prior experience in Antarctica, leading a team that drilled a bore hole and used the fiber-optics to measure ice and sea temperature on the McMurdo Ice Shelf from 2011 to 2013.

Their current project is called TARSAN – Thwaites Amundsen Regional Survey and Network – and is led by Oregon State University. The University of Colorado, University of Alaska Fairbanks, and Temple University are U.S. collaborators along with several British institutions. It is one of eight projects that make up the International Thwaites Glacier Collaboration. The research program represents the biggest and most complex scientific field program on a single glacier in Antarctic history.

The TARSAN project site, with two automated multi-sensor stations installed on the Thwaites Eastern Ice Shelf in January 2020, is about 800 desolate miles from the main U.S. Antarctic base at McMurdo Station. West Antarctica is the stormiest part of the world's stormiest continent. The two automated stations have been recording weather data, GPS positions and fiber-optic temperature profiles year-round, even in the harshest weather. This includes hurricane-force winds that partially collapsed the instrument tower and tore away two of the solar panels. Snowfall has buried the lower station equipment under 20 feet of snow. Part of the data was uploaded each day by satellite phone.

“Chris left to go to Antarctica in November 2021 to service the moorings and get the full compliment of  data,” Tyler said. “We could only transmit condensed and shortened records as the sat-phones transmit at about 300 baud, the equivalent of internet speed back in the early 1990s. Fortunately, the towers were wired well and despite being partially buried in the snowpack and hit by high winds, they withstood the elements and preserved the full data sets.”

Getting to the research site was no easy feat.

“The first flight started in Albany, New York with a chartered NSF airline/flight with many researchers aboard,” Kratt said. “We had four days of isolated quarantine before boarding, and then we were masked up for nearly 24 hours to get to New Zealand, with a long layover in Hawaii. And they didn’t let us out of the plane at all. Once there they quarantined us in a hotel room for two more weeks, then we flew in a military C-130 aircraft for eight and a half hours more down to the ice – and landed at McMurdo Station.”

Besides the usual challenges of operating in Antarctica, there were logistical challenges associated with Covid-19. The planned three weeks of field work kept shrinking before the TARSAN team of five finally traveled from McMurdo station to the remote summer base called WAIS Divide, in another flight lasting five hours.

“There were twenty people in camp and the average temperature was always well below freezing, despite 24 hours of daylight.” Kratt said.

The team camped at the remote base for nine days. Narrow weather windows afforded the team with only three good days to make the four hour, 600-mile round trip via small Twin Otter aircraft from WAIS Divide to the stations on Thwaites Eastern Ice Shelf.

“During most of the three day-trips – flying in and out – it is cold and boring with just flat ice, snow or clouds to see for the two hour flights, but as you get closer to the coast it gets very surreal in an exciting way,” Kratt said. ”One of the things you first begin to see is the crevassing, huge tears in the glacier ice, and then the shattered edge of the ice shelf.  Some crevasses show ‘dirty ice,’ refrozen sediments where muddy seawater seeps upward into fractures on the bottom of the ice. There was something grand to see on both sides of the plane.”

Kratt described what he saw as they came closer to the study site: huge blocks of ice – the collapsing ice shelf with city-block-size chunks of ice, some more than 300 feet high – “like city blocks with buildings on them” as far as the eye could see.

When the small plane landed at the sites of the two automated stations (a few miles apart), Kratt could see the damage the Category 5 hurricane-force winds had done. The telecommunications data tower was bent, one support cable snapped and one solar panel was hanging by a wire and barely suspended above the snow. The recording equipment was buried under 20 feet of hard-packed snow.

“All of the instrumentation was deployed, then COVID hit so there was no field season in 2021,” Kratt said. “Data were received daily by satellite modem (very slow). But the system was relatively reliable as it had been field tested during earlier research on the McMurdo Ice Shelf a few years ago measuring ice shelf and ocean temperatures.”

To recover some of the instruments that were buried in the 20 feet of snow, they used a chain saw and shovels to dig the big pit with tiers to climb down to the bottom.

“We were extremely fortunate to get to that equipment, especially in the limited amount of time we had,” Kratt said. “Luckily, the pilots pitched in with the digging.”

While the pilots were busy digging, Kratt was busy downloading all of the Distributed Temperature Sensing data.

“It was a big relief to see all the data intact and retrievable,” he said. “Since our time was cut short, we had to be more organized and reprioritize what we could get done.”

He came back from the Antarctic in January 2022 with a treasure trove of ocean temperatures from beneath the ice shelf over a 14-month period.

“The DTS systems performed very well throughout the first two years of monitoring, with some interruptions due to power in mid-winter,” Tyler said. “We have great thermal profiles and can see that in Year 2, the ice ocean boundary layer is significantly thinned and stabilized while basal melting is very modest at both mooring sites.”

The moorings and fiber-optics will continue to collect data beneath the ice shelf until at least early 2023. Erin Pettit from Oregon State University will lead the TARSAN team during the 2023 field season when they will recover the DTS data and conduct a seismic survey (vibration studies) using lasers and fiber-optic cable.

Kratt teaches Applied Geophysics and is the CTEMPS Laboratory manager.

For more information on the overall project visit the ITGC project website.