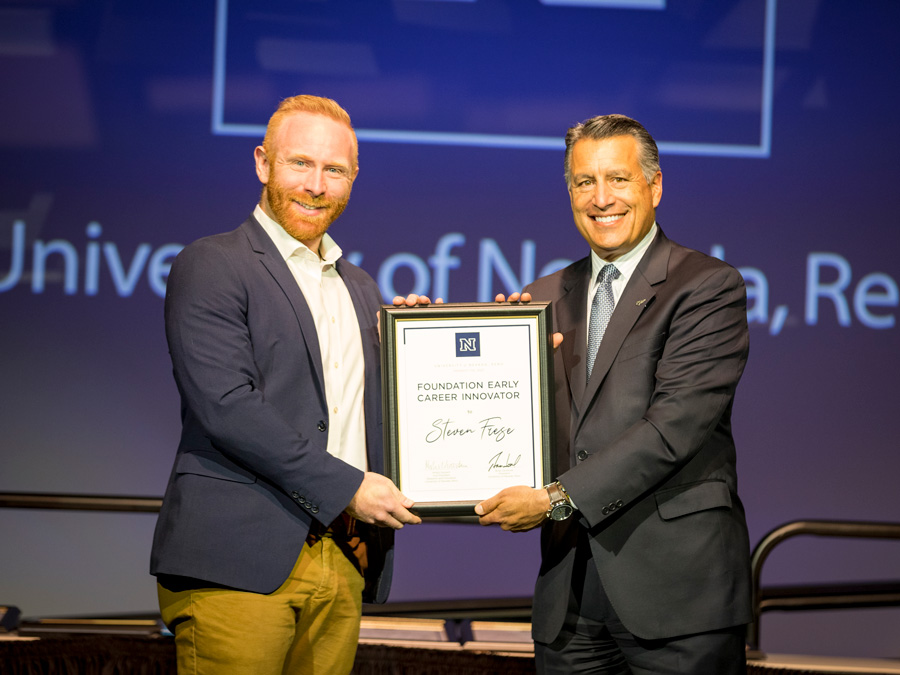 Necrotizing enterocolitis is one of the most common causes of death for preterm infants, affecting approximately 30,000 newborn infants in the United States yearly. A solution in the form of a liquid probiotic for preterm infants has been developed and launched commercially largely due to the work of Steven Frese, an assistant professor in the College of Agriculture, Biotechnology & Natural Resources.

New peer-reviewed research has shown this product – now used in major hospital systems across the nation – reduces the risk of necrotizing enterocolitis. Working with a major infant nutrition company, Frese led research supporting the product and supported the technical sales efforts for the launch of this product, making him a worthy candidate for the University of Nevada Reno’s Foundation Early Career Innovator Award for 2022.

Winning this prestigious award adds to Frese’s numerous other career accomplishments, including being a named inventor of 18 patents, having over 40 peer-reviewed publications and receiving the Jules Tournot Award from the European Probiotics Association for his doctoral dissertation.

“I was really surprised and humbled to be nominated,” he said. “It was a really nice recognition for this work that myself and others have done. A huge group of people have worked on this, from the initial discoveries almost 20 years ago, all the way through to the development of the product and the commercialization.”

Initially interested in understanding biology and how two organisms communicate with one another, his career eventually led to a role as a postdoctoral fellow at the University of California, Davis. When his mentors there started a company to spin out their research group’s discoveries as a startup company, they hired Frese to lead research and development (R&D).

His role was to understand what the organism in the probiotic does for infants being fed the probiotic, including how the microbiome is affected.

“We were coming at it from the angle of understanding what the ecology of the gut microbiome was, and how we could leverage what we knew about that system to change it and improve it for the better,” he said. “A lot of my work was leading the R&D team and working with my colleagues to really build a case for why this is a valuable opportunity for preterm infants.”

The results of this probiotic’s use in hospitals’ newborn intensive care units have been overwhelmingly positive. According to a May 2022 study published in the Journal of Pediatrics, administration of the probiotic led to significant reductions in the risk of necrotizing enterocolitis and in fatalities related to the disease in infants. Frese said one of the most rewarding aspects of his collaborative work is observing the impact it is having in the real world.

“Families went home with their kids because of the work we did. When I started thinking about it, I got a little choked up,” he said. “To go from the basic discoveries to helping get hospitals adopt the product is a really unique [experience], and it’s one that’s been really rewarding. I get to see the full lifecycle: from discovery to impact, and that’s really rare. I feel really lucky to be able to have been a part of that.”

Another project that Frese has been working on in his lab has been The WOLFPACK Study. The goal of this study is to “understand how the gut microbiome of Northern Nevadans is affected by diet, health, lifestyle and other factors.” Participants in the study must be an adult resident of Nevada, and will be asked to provide a fecal sample and fill out surveys related to their medical history, diet and lifestyle.

“We’re trying to build a demographically representative data set. These often get done in university towns where you might get 500 participants, but 300 of them are undergraduates, so you don’t have this age-stratified demographic. Therefore, you’re not really collecting data on the population as a whole. So, we're working to try and actually collect a representative data set of people from all over the state.”

“Steven Frese’s collaborative research work is a wonderful example of the important real-world applications of research,” said Mridul Gautam, the University's vice president for research and innovation. “His research continues to contribute to the growth and development of the University and, ultimately, society.”

Frese has served as a repeat faculty mentor for Undergraduate Research, part of Research & Innovation. He also helped conduct the June 2022 Undergraduate Summer Bootcamp: Microbiome Research, a program supported by Nevada INBRE and the Nevada Bioinformatics Center. This three-week long workshop taught undergraduates how to generate and analyze microbiome data. Students in this program also had the opportunity to participate in the WOLFPACK Study.