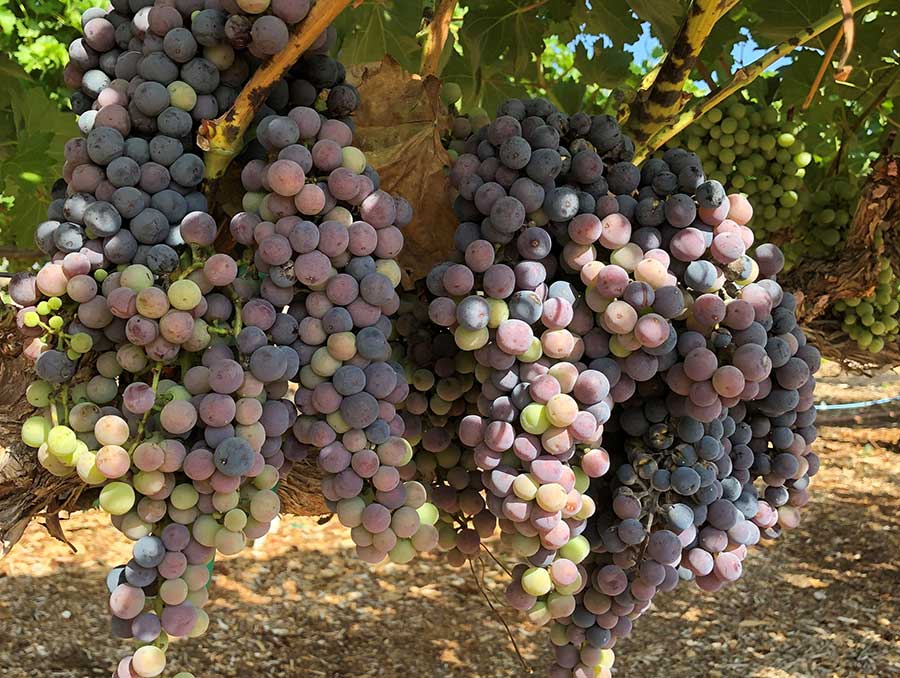 The University has been conducting research on growing wine and table grapes in Nevada for more than 25 years. The research has provided some valuable information for growing grapes in both northern and southern Nevada, as well provided some local wineries with Nevada-grown grapes. The work has been done by the University’s College of Agriculture, Biotechnology & Natural Resources, and its Experiment Station and Extension units, in collaboration with other institutions and local growers and vintners.

Now, a new, more formal partnership has been formed to advance and promote the industry locally. The Northern Nevada Demonstration Vineyard & Winemaking Network is a new partnership aimed at building on practical experience in the region, as well as drawing on viticulture expertise from around the Western U.S. The primary partners include the University’s College of Agriculture, Biotechnology & Natural Resources; its Experiment Station and Desert Farming Initiative; and the Nevada Grape Growers & Winemakers, an organization of Nevada grape growers and winemakers and others in the state who want to support the industry.

“Our College is absolutely committed to partnering with businesses in this state to promote the growth of industries with potential for our state,” said Bill Payne, dean of the College. “There seems to be a real synergy right now with growers, producers and others in the community, that the time is right to enter into a more formal agreement to bring the University’s resources and research capabilities to help advance this industry.”

The goals of this partnership are to:

To jumpstart the new partnership, the College and the Experiment Station each contributed $5,000 to the Nevada Grape Growers & Winemakers in October to support activities and events, such as classes, formal wine evaluations, vineyard tours, roundtables, professional speakers and more. Since then, the partnership has been off and running, with some new collaborations and research already underway.

University debuts its own white and red wines for University events

This fall, the Experiment Station supplied initial funding to support the making of a University of Nevada, Reno riesling wine. The grapes are from Lenox Vineyards in Silver Springs. Nevada Sunset Winery harvested the grapes, contributed winemaking equipment and space, and oversaw winemaking activities. The winery recently won Best of Class for their gewürztraminer and riesling wines in the San Francisco Chronicle Wine Competition, which is the biggest wine tasting competition in North America. About 20 cases of the University’s riesling were made, which will be used at University events this year.

For red wine enthusiasts at University events, there will also be a University red blend. The blend is made from lemberger, primitivo, petit sirah and graciano wines from Nevada Sunset Winery. On Feb. 16 at the winery, some fun was had deciding what the precise blend would be. The new partnership held a wine-blending event where eight teams of attendees competed against each other to produce the best blend. A panel of judges blind tasted and declared the winning combination. The wine will be bottled soon, and served this year at University events, including a fall wine-tasting event.

The Desert Farming Initiative and the Nevada Grape Growers & Winemakers selected a riesling varietal, and the Experiment Station has purchased grapevines to develop a network of demonstration vineyards in the area. Some new vines will be planted at the University’s Valley Road Field Lab, home base for the Desert Farming Initiative’s programs. The Initiative runs a commercial farm, including orchards, open fields, hoop houses and a greenhouse, and seeks to advance climate-smart farming and food sovereignty in the region through demonstration, education, research and outreach.

“Past research and practical experience has found riesling to be well suited to our northern Nevada region,” said Jill Moe, director of the Initiative. “It’s cold hardy and doesn’t need a long growing season.”

Moe’s staff and student intern Ben Peters conducted soil tests at a few different University sites, and Field 3 at the Valley Road Field Lab proved to have the soil most conducive for growing the vines.

“The other sites had high levels of salt and boron,” Peters, a senior majoring in agricultural sciences, said. “The vines would not make it. We have way too much boron at those sites.”

The new partnership is affording Peters with an internship focusing on wine grapes and orchards at the University, and winery operations at Nevada Sunset Winery.

“We’ll be planting the vines and apple trees in April and May, and I’ll be helping to take care of and monitor those,” he said.

Besides planting at the Valley Road Field Lab, Moe said there are local private vineyard owners interested in planting some of the vines on their properties as part of the demonstration network. A few more sites will be selected this spring to plant small numbers of the vines.

“By having a network of sites, we can show how the vines do in different microclimates, and with various methods of trellising, pruning and irrigation management,” she said.

Building on past research

The University planted its first experimental vineyards at the Valley Road Field Lab in 1995. Grant Cramer, professor emeritus with the Department of Biochemistry & Molecular Biology, who is one of the leaders of the new partnership, conducted research there with other colleagues for more than two decades.

His initial work with the vineyard included research into abiotic stress, or the negative impact of nonliving factors, on the grapes. He also studied the effects of drought and cold on the vines, and how different varieties faired. He also conducted irrigation trials that revealed the vines needed a lot less water than previously thought.

Additionally, Cramer, Professor John Cushman and Professor David Schooley worked on a grant-funded project for the National Science Foundation, where they studied the impact of water deficit on grapevine physiology and grape quality. They found that wine grapes under moderate water deficit improved wine quality, further proving that water could be conserved while growing grapes. From that research, Cramer and Cushman developed the first wine grape microarray, a tool used to detect the expression of genes, which allowed for further, large-scale studies to be conducted on wine grapes.

In the southern part of the state, the College and its Extension unit are also conducting research on grape growing, in a climate that is of course, much different than northern Nevada.

“The harvest schedule is much different here in southern Nevada, than in northern Nevada, or in Napa Valley, for example, where harvest usually starts mid-September and extends through sometime in October,” said Don White, an Extension Master Gardener who volunteers at the Research Center & Demonstration Orchard in North Las Vegas, a collaborative facility of Extension and UNLV. “We harvest after veraison, the phase when grapes change color and gain maximum sweetness. Veraison usually lasts 30 to 40 days in Las Vegas, appearing around the third week of June, though it has been creeping forward a little over the last several years. This year, we started seeing verasion happen around June 10, and we harvested from late July to mid-August.”

The Orchard currently has over 200 vines consisting of 24 varieties of grapes, most of them being wine grapes. The first grapevines were planted there in 2005 to see which varieties grow well in the southern Nevada climate and are drought tolerant or resistant. As some varieties are tested and don’t do well, they are swapped out to try other varieties.

“I think a lot of people are amazed that you can even grow grapes here, and the number and the variety that you can grow,” said Louise Ruskamp, manager of the Research Center & Demonstration Orchard. “Grapes are not that difficult to grow. You can start getting a decent crop within three to five years, and that's true for the wine grapes or table grapes.”

Last season, the Orchard sold over a ton and a half of grapes to wineries, bakers and home winemakers. The largest buyer is Sanders Family Winery in Pahrump.

“Jack Sanders, owner and operator of the winery, obtained the first winery license in Nevada and is a proud supporter of winemaking in Nevada, and really supports our research,” White said. “He appreciates being able to get a lot of our grapes, as it allows him to meet the Nevada state winery license requirement of having at least 25% Nevada-grown grapes be used for wines poured in Nevada winery tasting rooms.”

One research project conducted at the Orchard was in collaboration with UC Davis and was sponsored by the Northern California Grape Growers Association. The four-year grant provided $30,000 in 2015 to install trellising, run irrigation lines, and plant 100 colombard and syrah vines that UC Davis propagated and provided for the study. An additional $12,000 per year was provided to maintain the vineyard, collect data and make observations. The purpose of the project was to study the effects of drought and soil salinity, as well as ambient heat-rise, on grapevines.

Colombard and syrah were chosen for their moderate tolerance to the stresses being studied. The vines planted were propagated on their own root systems or grafted to four known root systems that had varying degrees of additional tolerances to these stresses, to observe and measure which vines/root systems performed best under maximum stressing. In addition to the vines planted at the Orchard, the overarching study also included two other locations in the desert Southwest, with the Orchard in Las Vegas being the southernmost, most extreme climate of the three research sites.

Several of the rootstocks chosen for grafting were derived from wild, indigenous desert grapes, one from the foothills of the Amargosa Mountains 50 miles from Las Vegas at the entrance to Death Valley, and one from the rim of the canyons at Big Bend in Texas.

Cramer and Extension’s Robinson supervised the research at the Orchard, with White managing the vineyard and taking measurements. When the study concluded, among other findings, the research showed the vines grafted with the wild grape rootstocks performed well under the stresses.

“During the 2019 growing season, I watered the grapes only 5 to 8 gallons a week,” White said. “We discovered the grapes still grew and produced well on these wild grape rootstocks. That year, the vines produced over a half ton of grapes.”

While that particular study has concluded, Extension is conducting additional studies on growing wine grapes at the Orchard.

“Right now, we are concentrating our efforts on furthering our understanding of the effects of climate change on grape production, as the season comes earlier, and the weather gets hotter every year,” White said.