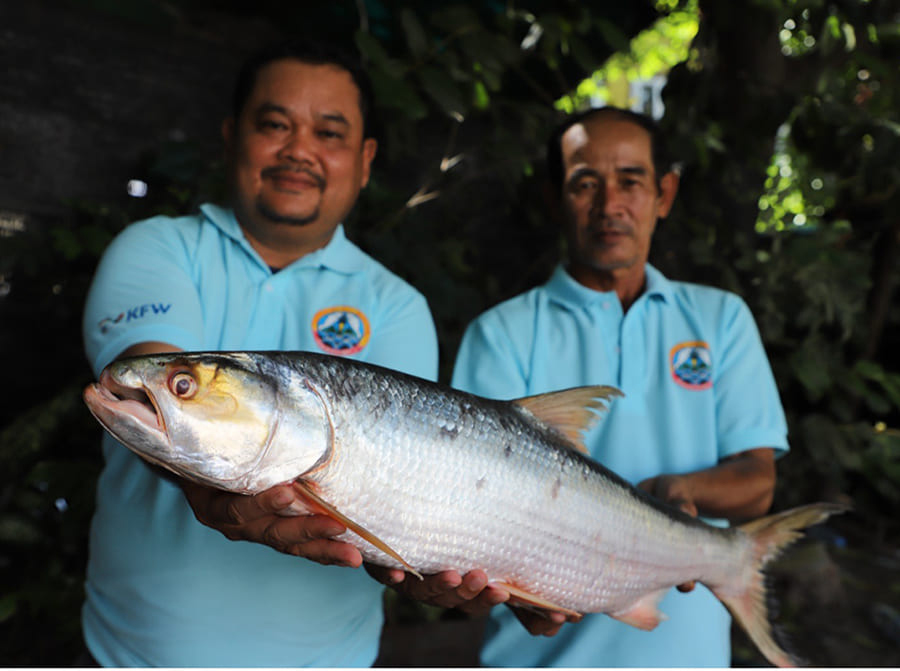 One of the world’s most threatened fish species, for which scientists have been searching for decades, has been unexpectedly rediscovered in northern Cambodia. No adult giant salmon carp had been officially recorded since 2004, but earlier this year a 13-pound specimen was reported from a local wet market along the Mekong River, the only river system on Earth where the species lives.

“The discovery of yet another amazing, but highly endangered animal, in an area that supports the livelihoods and food security of millions of people, shows plain as day the urgent need for conservation programs and the potential benefits of government, scientists and local communities coming together to safeguard the wonders of the Mekong,” Zeb Hogan University of Nevada, Reno fish biologist and research professor who has studied Mekong fish species for decades and who leads the USAID-funded Wonders of the Mekong research project, said.

So rare is the giant salmon carp (Aaptosyax grypus) it does not have a Khmer name, and it has been referred to as a “Mekong Ghost.” Believed to grow as large as 66 pounds, it is listed as critically endangered on the IUCN Red List of Threatened Species. Although the fish was not found alive – with the cause of death unknown – its discovery has raised hope that the species still prevails in the Mekong.

“After more than two decades of working on this topic, I’m so happy to confirm the existence of this unique animal,” Chan Sokheng, a biologist with the Cambodian Fisheries Administration said. “It means there is still hope, against the odds, to conserve this evolutionarily distinct and globally significant fish for future generations.”

The finding is the latest in a series of startling aquatic discoveries in the Cambodian Mekong region. Earlier this year, large runs of endangered Mekong shad were reported from the area, and in June scientists and local community members tagged and released a 661-pound (300 kilograms) giant freshwater stingray, which was confirmed as the world's largest freshwater fish by Guinness World Records.

“This year has been a grand slam for wildlife surprises on the Mekong, but the game is far from over and victories for biodiversity are still hard to come by,” Hogan said.

The Mekong River, which runs through six Asian countries, is a global biodiversity hotspot and home to almost 1,000 different species of fish, including some of the world’s largest freshwater fishes. But the river and its many tributaries, which sustain the livelihoods of tens of millions of people, have come under increasing pressure in recent years from dam building, overfishing and climate change, with the larger fish species at particular risk.

Freshwater megafauna (defined as animals that can grow over 200 pounds are among the most threatened animals on Earth, with species in Asia declining 97 percent since 1970. One of the largest Mekong species, the Mekong giant catfish, is seldom seen in the wild anymore, though the permanent disappearance of the giant salmon carp would have been the first confirmed extinction of a giant fish species in the Mekong.

Globally, freshwater species extinctions have become more frequent, a sign, scientists say, of accelerating degradation of aquatic environments. Meanwhile, some non-aquatic animal species that were once feared lost have in recent years been rediscovered, such as Wallace's giant bee, the Philippine naked-backed fruit bat and the La Palma giant lizard. Such surprising resurrections have often been the result of partnerships between local residents and scientists, which is what happened in the case of the giant salmon carp.

"The recent discoveries along the Mekong have been the result of outreach to local people, many of whom have a deep knowledge and dependence on the river and its wild creatures," Chea Seila, Wonders of the Mekong project manager, livelihoods expert, and long-time advocate for community-led research, said.

The salmon carp's revival was confirmed after the three-foot-long specimen appeared in the market, where it was recognized as something out of the ordinary by a local fish merchant who photographed the fish. The merchant then contacted Sokheng about what he referred to as the “trey chamlek,” a phrase in the Khmer language that translates as “strange fish.” From the photos, Sokheng was able to identify it as a giant salmon carp based on its sharply curved jaw, yellow stripe on its head, and fusiform shape reminiscent of a salmon, an appearance thought to be an adaptation to the Mekong’s deep water rapids and the fish’s primarily fish diet.

Scientists will use the DNA of the dead fish to develop various tools for studying the distribution of the species. They also hope to find more specimens alive that can be tagged and released for further study.

“We need to find and learn more about this species, to figure out its distribution, migratory patterns, reproductive biology, where it spawns, and what can be done to save it,” Sokheng said.

The discovery preceded a workshop convened by the Cambodian Fisheries Administration and the Wonders of the Mekong project, and attended by local community representatives and other partners, to map out future research and conservation actions for many of the Mekong’s endangered fish. These activities will include expanded community involvement in fisheries data collection, telemetry research to better understand fish ecology, and eDNA sampling in an effort to better document rare species.