Many mathematicians in the College of Science work in pure mathematics, but the field often blurs the lines between math and art. 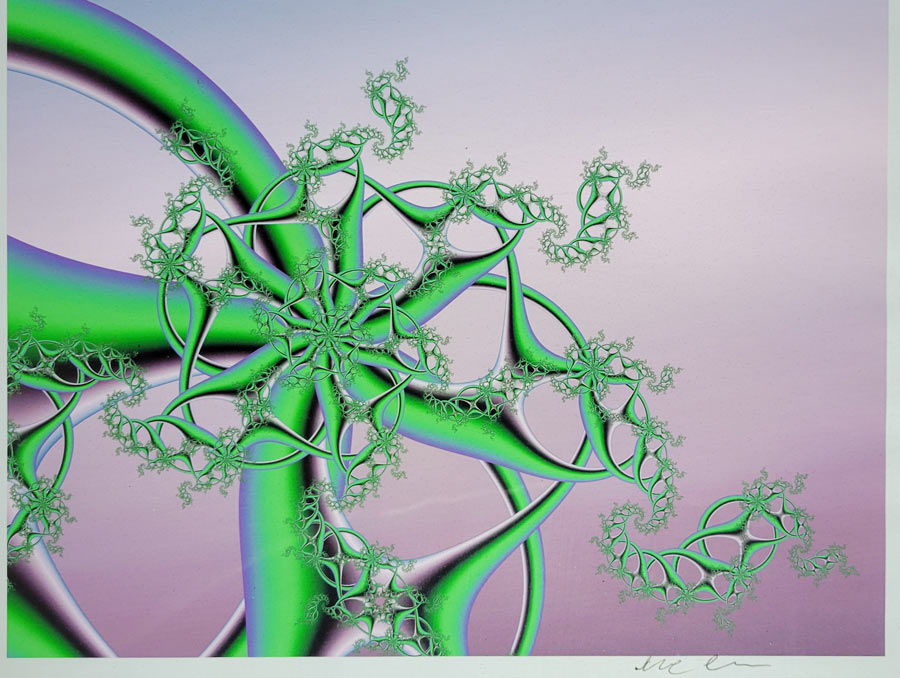 Many mathematicians in the College of Science work in pure mathematics, but the field often blurs the lines between math and art.

Most people use math to do everyday things, like balance their budgets, design workouts at the gym or build bridges. But for many mathematicians, math’s beauty outweighs its practical uses. For those who work in pure mathematics, it is seen as a form of art. The fields of number theory, knot theory and group theory each contain unexplored worlds of possibilities. For professor emeritus Jerry Johnson, math’s beauty is its main draw.

“Almost any mathematics that a person does has some potential for use at some point, even though you may not have any idea of what it’s going to be,” Johnson said. “People like me do mathematics just for the pure joy of it.”

“If you can imagine yourself as an explorer trekking to the South Pole for the first time, being excited about what you’re going to find there, it’s like that."

Srinivasa Ramanujan, a famous mathematician from India, was a number theorist whose work, though he would never know it, would be relevant to the mathematics of how black holes form. But Ramanujan wasn’t doing the math to learn about black holes. He did math for the sake of doing math, like many mathematicians in the College of Science, including Johnson.

“A lot of the mathematics that we do isn’t applied mathematics, it’s for its own sake,” Johnson said. “It’s almost like philosophy. It’s not necessarily applicable to anything, it’s just beautiful and creative and neat and you enjoy doing it.”

Mathematician G. H. Hardy, who brought Ramanujan to Trinity College in Cambridge from India, was “absolutely opposed to any application of mathematics,” Johnson said. Hardy was a number theorist as well. “He thought math was just pure beauty and creativity and it would appall him to think there were any applications.” Ironically, internet encryption relies on theorems from number theory. Without those theorems, online purchases wouldn’t be possible. “We always joked that if Hardy were alive today, he’d just be cringing at the idea of his beautiful number theory being used for internet transactions,” Johnson said.

“The main motivator is just to explore these forms of beauty in the abstract,” math professor Stanislav Jabuka said.

“Solving math problems became a keystone in my life,” Keppelmann said. “We try to show there’s a lot more to math than routine worksheets.” Keppelmann is part of the Nevada Mathematics Project, which aims to improve mathematic and scientific education of children in Nevada.

Keppelmann hopes to inspire some sense of awe in his math students, whether they are in elementary school or college. Math hides in art. The reason the National Geographic and Twitter logos are appealing is because they follow the rules of the Golden Ratio. Poetry is written in iambic pentameter, which gives a nice cadence to the poem. Math hides in nature’s fractals like river deltas or the veins in a leaf.

As technology improves and brings quantum computing closer to reality, Keppelmann notes that computers have become more and more integral in pure mathematics for proving theorems.

“We hypothesize that something works a certain way. We have computers do the calculations,” Keppelmann said. But he points out that there are some things computers can’t do, like form an idea that leads to a hypothesis. “The computers don’t think like that.” It takes a mind to formulate an idea out of thin air, to find the math in nature or the laws of physics or a pattern.

Math shows up in philosophy, too. One notable example Keppelmann gave was Gödel’s famous theorem which states that in any system where a set of truths is identified, there will always be some truths that exist but cannot be proven.

Johnson said that once you do find an answer to a math problem, it typically leads to even more questions. “It’s like science in that way.”

Math is unique among the sciences in that its theorems can be proven. In other scientific disciplines, a hypothesis cannot be proven but can be strongly supported. Math has rules that must be followed. And those proven theorems that mathematicians come up with, that can take centuries to solve, have been there the whole time.

“The math was there, waiting for someone to need it,” Keppelmann said. Waiting for a mind to pull the idea out of thin air.

“If you can imagine yourself as an explorer trekking to the South Pole for the first time, being excited about what you’re going to find there, it’s like that,” Jabuka said. “Some of these spaces, no one has studied before. You get to look at them and say, ‘Oh, look at this wonderful property that I discovered that we didn’t know this space could have.’ That still happens.”

Johnson differs from Hardy in that he acknowledges the practicality of numbers.

“There are applications,” Johnson said. “There are several faculty members in the department that are applied mathematicians. Their interest is in mathematics that is applicable to some real-world thing. I can see both sides of it.”

One of those applied mathematicians is associate math professor Paul Hurtado, who uses statistics and other processes to analyze models of ecology. He said the beauty of applied math becomes apparent when he’s developing models, and sometimes the beautiful parts are in what he’s missing.

“Sometimes it’s very illuminating not because you discover this wonderful, beautiful new thing, but you discover this void of knowledge nobody else has recognized as being important, and that gives you something to fill in,” Hurtado said. He also mentions that art is largely benefitted by creativity, but that creativity isn’t limited to art.

“In the same way that once you know how to carve or paint, once you get the math basics under your belt, then you can do creative things with them,” Hurtado said.

Math is often found in art, but many mathematicians feel the math itself is art, that the formulas are elegant and the graphs are beautiful.

“You find these problems to work on and they become fascinating,” Johnson said. “You want to solve the problems for their own sake and so you can share it with your colleagues.”