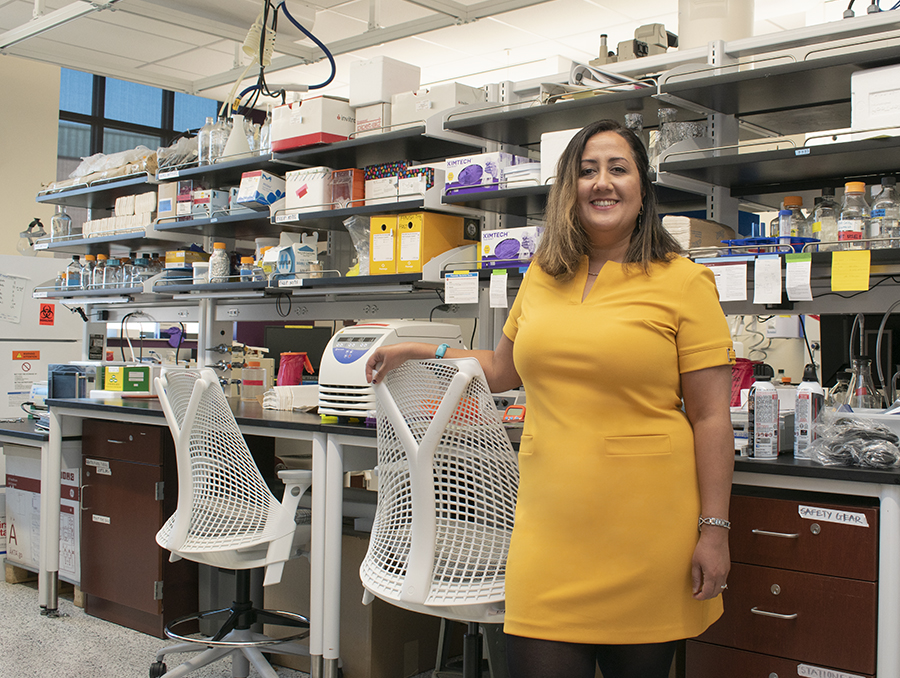 Neurodegenerative diseases such as Alzheimer’s disease affect millions of people worldwide, according to the National Institutes of Health (NIH). Those types of diseases cause the brain and nerves to deteriorate over time, manifesting in such symptoms as memory loss and personality changes. No cure is available, but researchers such as the University’s Maryam Raeeszadeh-Sarmazdeh are working to develop therapies that will alleviate symptoms and slow progression of the disease.

Sarmazdeh, a Chemical & Materials Engineering assistant professor, this summer received a grant from the NIH’s National Institute on Aging (NIA) to engineer novel enzyme inhibitors (molecules that interact with enzymes that play a role in neurodegenerative disease).

Proteins are workhorse molecules in living systems. An enzyme is a type of protein that increases the rate of biochemical reaction in the body. Sarmazdeh is developing novel enzyme inhibitors using state-of-the-art protein engineering techniques based on a specific protein that will block the enzymes that play a role in neurodegenerative diseases.

Her research team then will study the novel enzyme inhibitors using a simplified in vitro (outside the body) blood brain barrier model, which Sarmazdeh says mimics the actual blood brain barrier in humans, which plays a role in maintaining the integrity of the central nervous system.

Sarmazdeh’s team uses a combination of directed evolution (a method of protein engineering that mimics the process of natural selection) and rational design (creating new molecules with a certain functionality) to modify natural proteins with new or improved functions that have applications in biotechnology, health, energy and sustainability.

“We, as bioengineers, get inspired by nature,” she said, “and think about ways to recruit tools already existing in nature such as proteins, and make them do what they might not be able to do naturally using protein engineering and design techniques.”

“In other words,” she added, “we use our engineering mindset to engineer biological systems to make useful tools and products that improve human life.”

Sarmazdeh and the researchers in her biomolecular engineering lab use protein engineering and design to develop new biotechnology tools and products. Some of those new biotechnology tools are meant to address the need for new therapeutics in neurodegenerative issues, which has led to Sarmazdeh’s collaboration with the University’s Center for Integrative Neuroscience. Supported by an NIH/National Institute of General Medical Sciences Center of Biomedical Research Excellence (COBRE) grant, the Center for Integrative Neuroscience brings together scientists and engineers from around the campus to study the issues related to brain, neurological disorders and behavior.

“I am thankful for the support from the Integrative Neuroscience Center at UNR, and its mentors, including Dr. Michael Webster and Dr. Ruben Dagda, as well as the College of Engineering and my colleagues at the CME department,” Sarmazdeh said. That support has encouraged her and her team to apply the protein engineering techniques to finding potential therapeutics for neurodegenerative diseases.