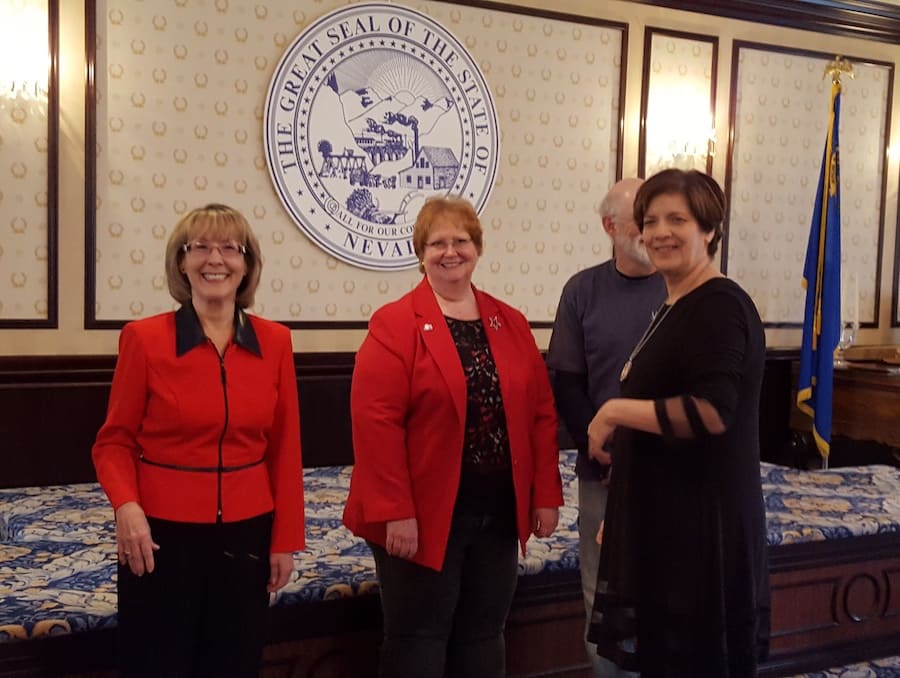 Peggy Bohn, who works in the University of Nevada, Reno’s Office of Real Estate, has won July’s Veteran Employee of the Month award by the Nevada Department of Veteran Services. She was nominated because she always goes above and beyond to connect people together.

The Veteran of the Month Program works to highlight veterans who dedicate their time giving back specifically to their other veterans and their local community. Nomination guidelines state that each individual has to have made a significant impact in their volunteer work.

While serving in the U.S. Army, Bohn was a Biological Science Assistant at the Letterman Army Institute of Research from 1977 until the end of her contract in 1984. There she served as an operating room technician and a certified ophthalmic assistant where she conducted research that helped to create foundations for medical advancements today, such as laser work and other eye tests.

During her time with the Army, Bohn received several achievements: the Army Achievement Medal, two Good Conduct Medals and an Army Service Ribbon for Marksmanship. She is a certified veteran advocate and a CAMO-RNO mentor, a local program that offers “troubled veterans” a second chance.

Bohn started at the University in October 1993 in the Scheduling Office, helping to coordinate spaces on campus for academic reviews and both indoor and outdoor events. She later transferred to the Planning, Budget and Analysis Office working on a number of projects, including tracking the building expenses of the Joe Crowley Student Union.

“I have known Peggy since I started at the University in 2014. She is always happy to see you if you require help with work related projects or inquiries, and she almost always has the answers for you. If she doesn’t have your answer she makes sure to find out for you,” Maher said. “She has always been there to make sure that classified employee’s voices are heard. She brings information from legislative and NSHE consistently. She will even stand at the legislative building for them when she feels it is important.”

In 2007, Bohn attended a variety of veteran’s events and wanted to create connections between all of the groups, so she created an email list that now has over 300 groups and individuals subscribed. A member from the Nevada Department of Veterans Services even crowned Bohn as the “Information Disseminator'' for her success in gathering all these different people together.

“Naturally, I have seen many transformations over the years on this campus. Buildings were removed, new ones erected and many advances for students, staff and faulty, yet it remains a ‘small town atmosphere,’” Bohn said. “With the assistance of the Veterans and Military Center and the Veteran’s Services Office, we are looking at ways to assist our brothers and sisters in arms with their educational, social and family advances with our support, knowledge and guidance.”

The Nevada Department of Administration Director, Laura Freed, and the Administrator of the Division of Resource Management started recognizing veterans for this award in January 2021.