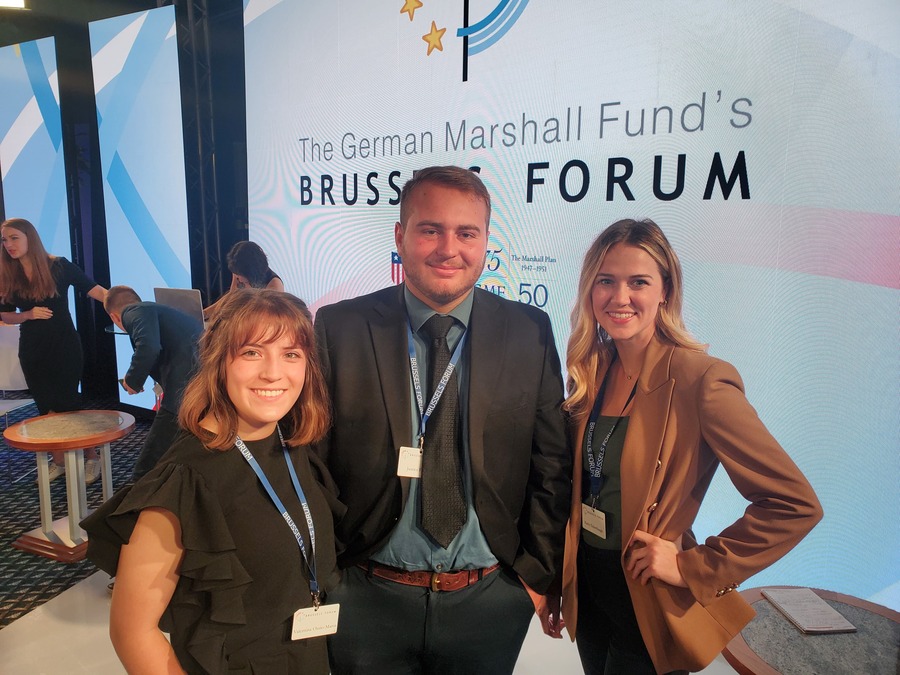 Held every summer, the German Marshall Fund’s Brussels Forum provides a platform for major figures in the world of transatlantic policy to discuss what’s coming next for the relationship between the United States and Europe, and analyze policy options. This year’s theme, on the 50th anniversary of the Fund, was “Winning the Strategic Future – In the Spirit of the Marshall Plan.” Convened by the German Marshall Fund (GMF), the Forum typically brings together presidents, prime ministers, ambassadors, policymakers and CEOs. And, alongside them, this year the University of Nevada, Reno joined the conversation in person, as one of two American universities sending representatives to the forum, and remotely.

After each days’ panels, Professor Ingram led Zoom meetings for students watching remotely from the US, and Political Science department Professor Susanne Martin joined two students— Brandon Denney and Dawson Frost—for a watch party at UNR in our Thompson Building Conference room. This energetic early-bird group met on campus at 4:30 a.m. on Day 1 and at 7:30 a.m. for Day 2, to view the "afternoon" panels (Brussels time).

While the conversations covered a lot of ground, UNR senior Valentina Ossio-Marin noted they consistently returned to “the war in Ukraine, the upcoming US midterm elections, the energy crisis coming out of the war, economic sanctions on Russia, China’s growing economic influence, and working on making democracy better.” With all of these topics on the docket, it was a very busy three days.

Not only were the days full, but the conversations took on a particular urgency, with the war in Ukraine having the potential to shift the United States and Europe’s places in global politics. While the unstable global economy and the need to address the climate crisis also came up, they frequently took a backburner to the conduct and consequences of the war. Political Science department Ph.D. student Keely Eshenbaugh commented that “NATO expansion was a particularly pressing topic,” as was “ending the war in Ukraine with democracy winning.” With numerous global crises heightened by the war, speakers noted that this is a make-or-break moment for a number of world powers. International Affairs and Political Science major Justice Forest said he was struck by what came across in the events' panels, that "while not necessarily friendly, Europe has a far less adversarial relationship with China than the United States and consistently maintains that the Russian government is the largest threat to democracy, while the United States sees the rising economic and military power of China as the larger long-term threat to democratic hegemony and sees Russia as a more immediate but smaller threat." Forest noted that, "to see that the west was not so united in opposition to China raised questions about whether or not the war in Ukraine would ultimately lead Chinese influence to grow in all spheres if the majority of the global north does not see them as a major threat to democracy." The Forum was truly a worthwhile learning experience for our students.

Seeing how these important conversations take place, then actually contributing to them, was a rare and valuable opportunity for our students. “I am grateful to have been able to attend the Brussels Forum because I am aiming to enter government and work to implement environmentally friendly energy sources,” Ossio-Marin noted. Forest said that being able to attend and participate in the Brussels Forum has been very helpful to his defining his career goals: "The Brussels Forum solidified my own firmness in wanting to pursue a career in foreign policy above all else. For some time I had been debating paths such as law school, graduate programs and even potentially a military commission, but having the ability to engage and discuss with various world leaders and policy experts in person made me realize that not only was it the field that most interested me, but that foreign policy was also the field with which I could use my education in Political Science and International Affairs to make the most difference. While I'm still not certain of the exact path from point-A to point-B, I am now confident that the options I want to pursue are those that will lead me to a career in the foreign policy sector, whether that be as an elected official or employment in an executive agency."

Funded by a generous donation from the University of Nevada, Reno Foundation, with strong support from UNR President Brian Sandoval (who serves as a trustee of the GMF) and UNR Vice President for Advancement Bill Johnson, this unparalleled opportunity at the Brussels Forum to listen to and speak with world leaders brought to life our students' studies, provided them with new perspectives on international and transatlantic relations, and sharpened their career goals.

Faces of the Pack: Kari A. Emm

New support for STEM internships and talent retention in Nevada

" ...it can make ‘Home Means Nevada’ a reality for more of our graduates than ever before."