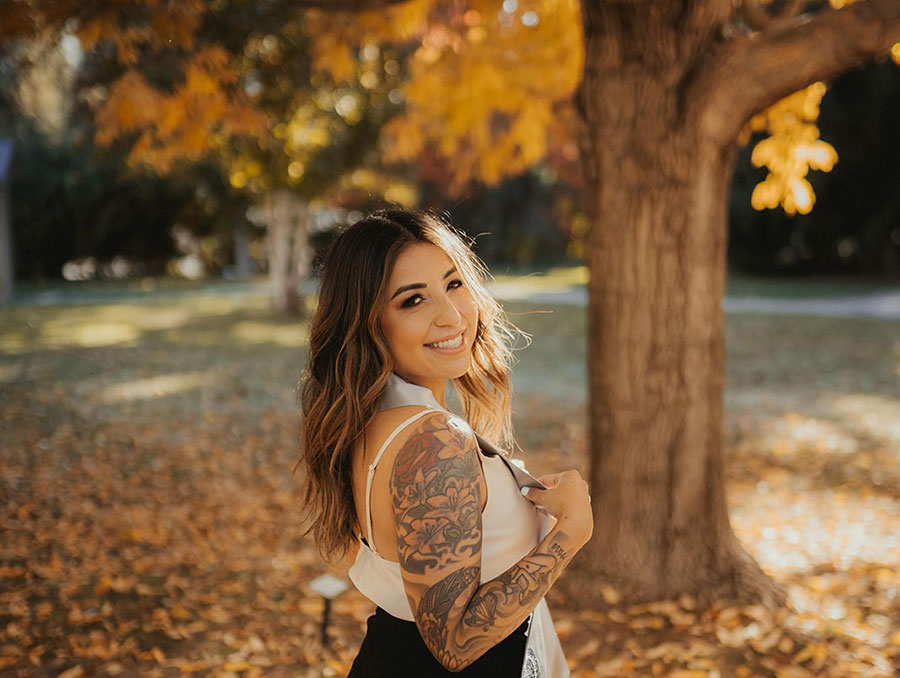 Perseverance, persistence, motivation – these words don’t justify what Graduate Student Zaide Martinez has accomplished in her lifetime. Martinez is currently pursuing the social justice graduate certificate in the School of Social Research and Justice Studies at the University of Nevada, Reno. She also works full-time as a services analyst for the Court Improvement Program in the Nevada Supreme Court. She hopes to continue to use the skills she has acquired with her time at the University to help underserved and marginalized individuals in the future to accomplish their goals and achieve their dreams like she did.

“I am a better-informed individual who can collaborate with various groups or entities to help those who need us the most,” Martinez said of her college education.

Martinez graduated with her Bachelor’s degree in communication studies from the College of Liberal Arts in 2020. She intends to complete the social justice certificate in 2022. Martinez is not a traditional student though. Her background and her roots shaped her into the diligent citizen she is today. Rather, Martinez credits her success to her mother and the supportive community around her.

Having emigrated from Mexico to the United States when she was four years old, Martinez quickly learned what it meant to be a first-generation immigrant. She watched as her mother suffered through multiple work-shifts to try to make ends meet. She attempted to adapt to the American culture, learning English as a second language. With little parental control due to her mother’s rigorous work schedule, Martinez became a victim to her environment.

“I was a troublemaker due to my environment,” Martinez said. “Then it just became part of my identity as an adolescent.”

Martinez recalled worrying for her mom’s wellbeing as she worked her third shift. She recounted the memories of getting in altercations at school, having failing grades because there was no one in her life to provide educational support. She was frequently in trouble with the law, caught up in gang activity, and trying to stay under the radar as an immigrant living in the United States. Martinez said she checked all the boxes for a high-risk juvenile who would become a repeat offender.

“I am not the only high school graduate who wanted to quit because of their legal status,” Martinez said. “I did not want to be a victim of my story; I wanted to be the role model that I never had for my nieces, nephews, teen moms and the kids growing up in the hood.”

Martinez said it took a village to mentor her to the position she is in today. She gives credit and praises to the law enforcement officers who genuinely cared to help her. She praises the secondary education teachers she had at her alternative high school that spent extra hours mentoring her and assisting her in her studies. Martinez even thanked the employers she had throughout the years that allowed her take time off and supported her through the immigration process.

Who she doesn’t give enough credit to is herself. Martinez easily could have got stuck in the juvenile detention system, but she persevered. Martinez could have succumbed to her immigration status and continued to live in the United States seeking asylum, but she persisted. Martinez remained motivated to excel, do better and achieve her dreams despite all odds.

It may have taken her several more years after high school to go to college and earn her degree as a Deferred Action for Childhood Arrivals (DACA) student – but Martinez was committed to higher education for herself and for others. Martinez now, is simply giving back to the community who supported her while she achieved her goals.

“My lived experiences have given me the motivation and empirical knowledge that contribute to federal and state workgroups or committees that are put in place to make a positive impact for children and families in the welfare system.” Martinez said. “In addition, I feel confident when I advise kids or adults who are going through what I went through.”

Just when you think someone couldn’t have suffered enough, Martinez shared her experience having a miscarriage while studying for her bachelor’s degree, which ultimately changed her career path. Originally studying psychology, Martinez then engaged in self-reflection and shifted gears to major in communications studies where she fell in love with the courses. In addition, she revealed the emotional toll she endured during the immigration process and how much those 10 years affected her mental health.

Martinez hired an immigration attorney to assist her through the process – but it still didn’t take away the stress and anxiety from the uncertainties that lie ahead. Martinez said mental health is suppressed in Hispanic culture and feels it’s important to talk about and make sure other vulnerable individuals get the support they need.

Martinez became a naturalized citizen of the United States in 2020 and said she finally felt “welcomed home.”

“My mission is to help individuals be better, whether it is a colleague or a community member,” Martinez said. It’s evident, Martinez is a stand-up model citizen who will continue to use her social justice studies to assist others in helping themselves.