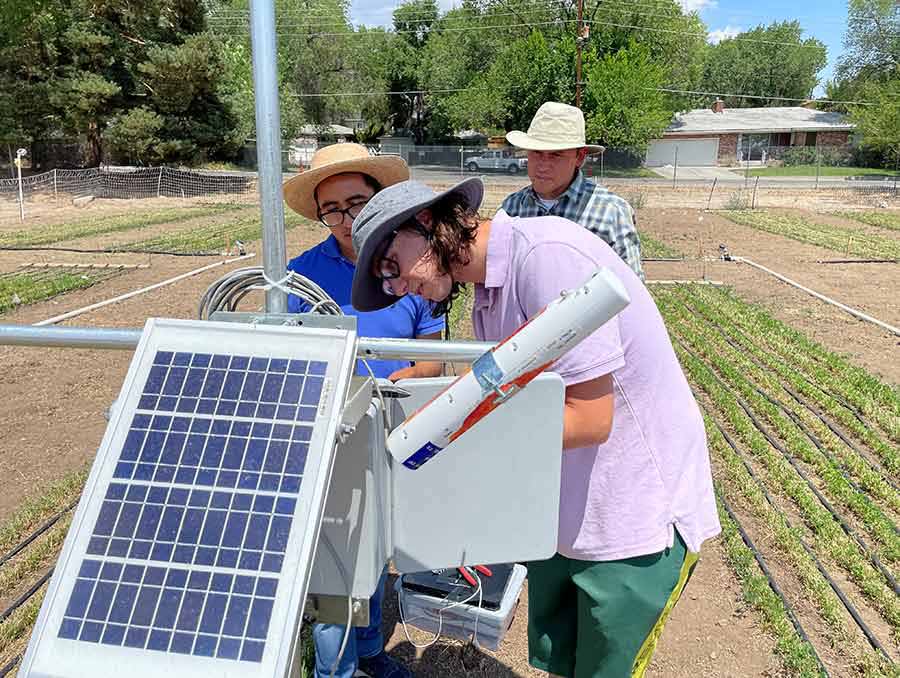 As wildfire smoke continues to fill the skies and drought grips the West, farmers are trying to cope with dwindling water supplies and do what they can to sustain profitable operations. Researchers at the University of Nevada, Reno are using new technologies to try to equip growers with “smart” irrigation scheduling, computer-generated models that would tell them how much to water based on certain conditions.

The work is being led by Assistant Professor of Agriculture Alejandro Andrade-Rodriguez in the College of Agriculture, Biotechnology & Natural Resources as part of at the College’s Experiment Station research. Andrade-Rodriguez aims to use various new technologies to develop a “smart” deficit irrigation scheduling system capable of identifying irrigation management decisions (when and how much to irrigate) that can help producers achieve the maximum yield that can be obtained with the conditions and water available that season.

He is focusing his research on alfalfa for now, with alfalfa being a widely grown crop in Nevada. He says that although alfalfa uses a relatively large amount of water, because of its deep roots, growth duration and extend of ground cover, it is also a good candidate for the application of deficit irrigation strategies, that is, using less water than what would be considered full irrigation while trying to maintain yield and quality. His research is focused on finding new ways to increase the amount of yield obtained per unit of water used.

Last fall, Andrade-Rodriguez and students in his Water and Irrigation Management Lab planted 18 plots of alfalfa at the University’s Experiment Station Valley Road Field Lab in Reno. They planted two alfalfa cultivars, one billed as drought-tolerant, ladak II, and the other billed as high-production, stratica. Nine plots of each variety were planted, three plots of each using three different watering regimes: full irrigation (100%), mild deficit irrigation (80%) and moderate deficit irrigation (60%), where 100% represents full replenishment of soil water depletion to field capacity during each irrigation.

Irrigation amounts required to implement these treatments are calculated using hourly data collected by “internet of things” (IoT)-enabled soil moisture-sensing stations and then applied with precision by a drip irrigation system. The degree of stress caused by the irrigation treatments is being monitored with infrared thermometers measuring plant canopy temperature, which is an indicator of plant stress. In addition, every two weeks, plant height and plant canopy cover (how much of the ground is being covered by the plants) are also measured, and aboveground biomass samples are collected.

“We will be using this data to obtain an alfalfa crop growth model that is adjusted for conditions in northern Nevada,” Andrade-Rodriguez said. “We’ll then use a computer program and the alfalfa model to analyze different irrigation scenarios and identify the best scenarios for irrigation scheduling, deciding when and how much to irrigate.”

Associate Professor of Agriculture Juan Solomon, who has been involved in the design and implementation of the research, will also be helping to analyze the quality and nutritional content of samples obtained from each of the treatments.

Andrade-Rodriguez has already developed a new class for both undergraduate and graduate students, Applied Programming for the Agriculture Sciences, to introduce them to the basic principles of programming and development of algorithms for use in agriculture.

“Computer science is transforming our everyday lives,” he said, “including the way we produce food and forage.”

Andrade-Rodriguez is interested to also see the differences they find between the high-production and the drought-tolerant cultivars. He said the trial plots at the Valley Road Field Lab in Reno will continue through next year. He plans to plant a similar trial in Fallon, Nevada, next year, using a sprinkler irrigation system, and wants to do a trial in Diamond Valley, Nevada, as well, using a center pivot irrigation system.

“The goal is to have crop models that can help us to provide irrigation management recommendations for our growers in Nevada facing reductions in their water budgets,” he said. “The code in our computer programs will be readily available to other researchers, and then maybe others can duplicate what we are doing here and create crop models and computer programs for other arid and semi-arid locations facing similar problems.”

Andrade-Rodriguez’s research is just some of the work that the College is doing to help Nevada forage growers. Read information on some other efforts during this year’s drought.