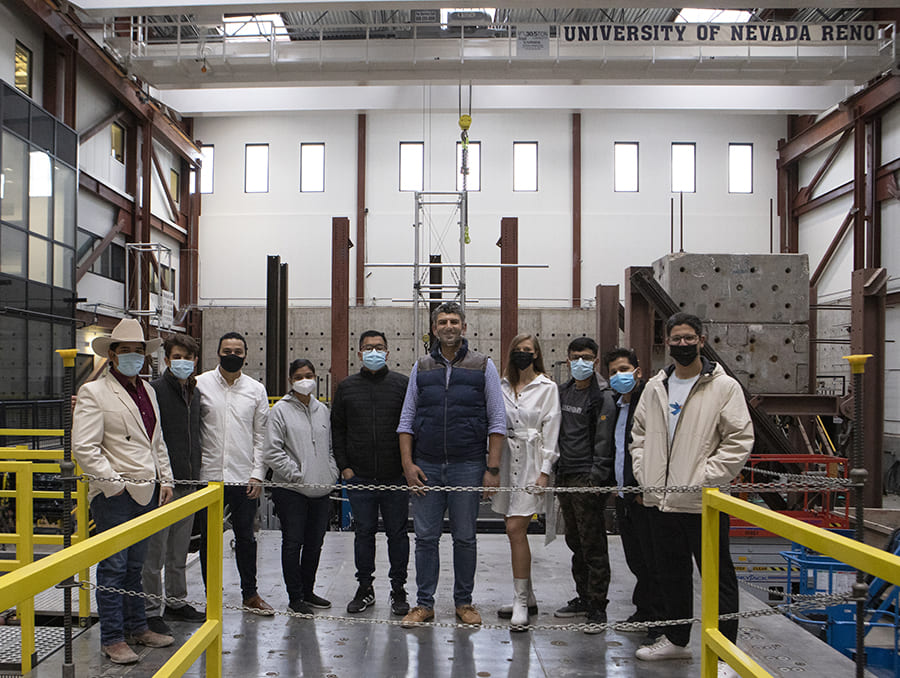 “The experience was a real eye-opener,” Moustafa said. “It was interesting to hear about other researchers using the same tools we are using but in completely unrelated fields. For instance, one medical lecture discussed the use of machine learning, data-driven models to develop tools to detect prediabetes. Even outside of engineering, they’re using the same tools we are, but in a different way.”

“Pillar one represents seventy percent of our research,” Moustafa said. “We are developing new materials and infrastructure design for the future, from the nano-scale up to full columns and beams.”

In addition to the traditional shake table tests that are the cornerstone of earthquake engineering, Moustafa’s team is also pushing research methods forward in two novel directions.

“In pillar two, we are engaged in proof-of-concept testing. We use everything from hybrid simulations, where portions of an experimental model exist in the physical world and portions of the model are simulated digitally. Under this pillar, we are also engaged in using drones to fly over our shake table tests to provide another angle of understanding what is happening during our experiments. Eventually, we hope to have drones parked, for instance, on bridges so that they can deploy within 30 seconds of seismic activity. They can capture real-time video of the behavior of structures during earthquakes and inform our emergency response strategies.”

Recognizing the increasing power of computer science and machine learning to speed up information processing in earthquake engineering, Moustafa’s team is embracing the possibilities this emerging field presents.

“We are looking to expand the ways in which we can use machine learning as tools,” Moustafa said. “When we do structural analysis, we want to benefit from the revolution in computation and data sciences. Combining hybrid simulation (pillar 2) with machine learning (pillar 3), we are able to do in a few hours what used to take days.”

The earthquake engineering research programs in the College of Engineering at the University of Nevada, Reno, Moustafa explains, have a long tradition of excellence in refining bridge and building construction techniques and materials. With the research his team is performing, Moustafa believes there is an opportunity to pursue new applications.

Accelerated Bridge Construction (ABC) is a process whereby the various parts of a bridge are built off-site, transported on-site, and assembled rapidly. This process is different from a more traditional method that would see the parts built on-site. Because bridges are built largely with concrete, after construction in the traditional method, the parts of the bridge would have to cure, lengthening the construction process and disruption to the natural flow of traffic in the affected area. In applying this principle to nuclear power plants, Moustafa believes his team can help advance the development of “small modular reactors” (SMRs).

“Nuclear physicists develop the technology necessary for nuclear energy, but all the technology must be housed in structures,” Moustafa said. “That is where we can help.”

In addition to having the opportunity to share his Future-GRID TecH research program, Moustafa was excited by the ways the organizers have built cross-disciplinary collaboration into the structure of the symposium.

“Conferences are typically very specific. Sometimes, they are not only for civil engineers but specifically for structural engineers,” Moustafa said. “The coolest thing about this symposium is that it includes engineering, science, and medicine, and all presenters must attend all sessions. This provides a rare opportunity to talk to people in other disciplines about your research, encouraging out-of-the-box ideas and collaboration.”

To further facilitate collaboration, participants are encouraged to apply for post-symposium grants that fund visits to the research facilities of other participants. For Moustafa, this opportunity may lead him to visit Qatar.

“There is a materials scientist working at Texas A&M in Qatar who is using reinforcement techniques in biomedical applications,” Moustafa said. “I hope to visit and discuss ways our research overlaps and could lead to future collaboration.”

Scenes from the Moustafa Lab