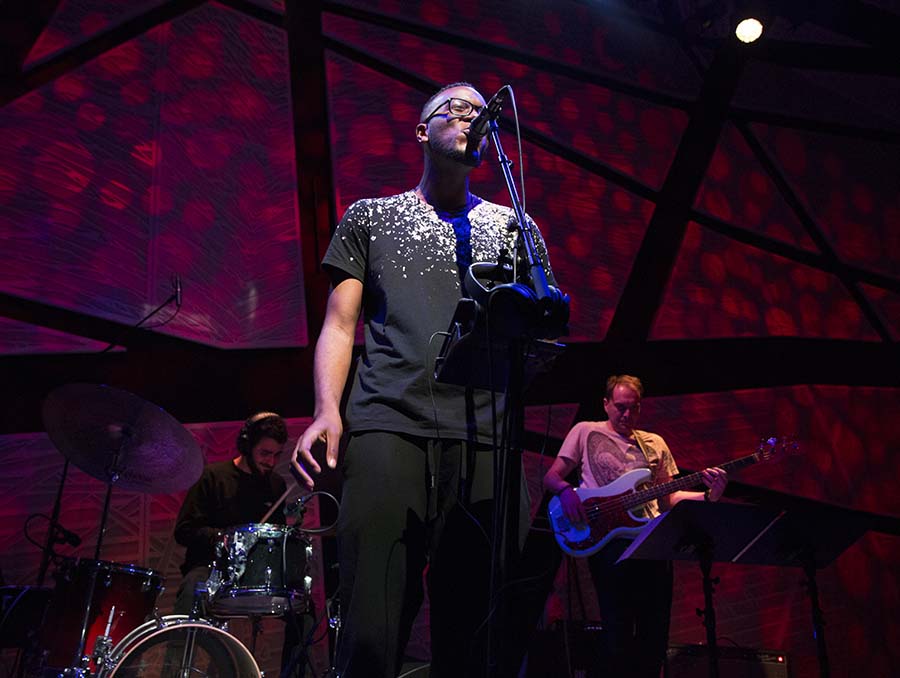 “As we close this absolutely one-of-a-kind season, we are going to get as close to our pre-COVID performance ways as possible, while keeping everyone safe and healthy,” School of the Arts Program Manager Shoshana Zeldner said. “Michael Mayo will be performing a one-hundred-percent live set for us. After a year of virtual performances, technology learning curves and the unpredictable ways of the internet, I can tell you that an entirely live set performed virtually takes an immense amount of skill, precision and willingness to take a risk. This attitude beautifully echoes Michael’s exceptional improvisation and experimentation that we hear, feel and see through his music.”

After Mayo’s performance, audience members will have the opportunity to submit questions live for Mayo. The performance will remain available on-demand to ticket holders for 14 days. Mayo will also be holding a series of master classes with University Jazz and Improvisational, Voice and Musical Theatre students the week of his virtual performance.

Mayo is a rising jazz composer and vocal phenom gifted with perfect pitch and extraordinary improvisational chops. The Los Angeles born artist literally grew up within earshot and sight of musical superstars.

“My mom is a singer; my dad is a saxophonist and multi-instrumentalist,” Mayo said. “I grew up in the studio watching them do their thing. They would go on tour, sing with people like Whitney Houston, Luther Vandross, Earth Wind & Fire, Stevie Wonder, Diana Ross, Michael Jackson...all the greats.”

Mayo listened well and his musical identity was formed long before he hit the stage with his own interpretations of contemporary music, R&B and jazz standards. Mayo’s newest album, Bones, will be released this spring and establishes his place as one of the most acclaimed and versatile voices in music today. When speaking about his new album, Mayo explains, “I want the people that gravitate to my music to do so because it comes from a place of honesty.”

In honor of Mayo’s performance, Liberty Food & Wine Exchange in Reno is making his favorite soul food available for the Performing Arts Series audience. The specially prepared Liberty Mac n’ Cheese and Sweet Potato Pie (house-made pasta and bacon, assorted cheeses, jalapenos and a slice of sweet potato pie) adds a special touch to the evening for only $20. Orders will be accepted now through the night of the performance, April 22. To order, email or call Kelly Somers at ksomers@renolfg.com, or call 775-336-1091 x2 and provide your full name, order quantity and the time that you would like to pick it up on April 22.

University Associate Professor of Jazz Piano, Adam Benjamin, has collaborated alongside Mayo in the past with his quartet Kneebody.

“My experiences collaborating with Michael have been joyous occasions,” Benjamin said. “His musicianship is extraordinary, and he has a mastery of his craft. He is also a great communicator, and in many ways has the wisdom of a much older musician. I'm really looking forward to the impact his energy and ideas will have on our students, and on the Reno Jazz Festival community."

After graduating from the New England Conservatory of Music, Mayo was coached daily by Herbie Hancock, Wayne Shorter, Herb Alpert, Kenny Burrell and Jimmy Heath while earning his MFA from the prestigious Thelonious Monk Institute of Jazz Performance – an achievement only three jazz vocalists have won. He also received masterclass training from Dianne Reeves, who owned multiple Grammy awards before 2018 when she received the ultimate: her NEA Jazz Master Award. Mayo now pays it forward by leading inspiring masterclass sessions held around the world.

Mayo’s career highlights include performing at The White House, The Kennedy Center, on the PBS program “American Voices” with operatic soprano Renée Fleming, as well as the Panama Jazz Festival. He’s recorded and/or performed internationally with Herbie Hancock, Kneebody, Michael Jackson, Usher, Matchbox 20 and Josh Groban, to name but a few. Mayo’s own band was a standout group at the 2019 Playboy Jazz Festival, Atlanta Jazz Festival and Monterey Jazz Festival.

Mayo’s fresh recordings reveal his advancing stylistic range – from his smoother than melting butterscotch a cappella presentation of “If You Could See Me Now” to his commanding, on-point urgency in “What’s My Name,” performed at the 2019 BRIC JazzFest with the band Kneebody. At other times, Mayo uses his body as an instrument that mimics instrumental sounds with mind-blowing results – you’ve simply got to hear Mayo’s vocal rendition of John Coltrane’s classic instrumental “Giant Steps.”

“Each performance this season includes something more intimate and engaging than we traditionally would have planned for in a pre-COVID context,” Zeldner said. “Michael’s performance allows us all a way to connect, personally in conversation with him, the artist. Something that just wasn’t as feasible before with Performing Arts Series artists.”

For tickets to the Performing Arts Series event with Michael Mayo, visit the School of the Arts' Performing Arts webpage, or call the School of the Arts at 775-784-4278 (8 a.m.-5 p.m., Monday-Friday). Virtual event tickets are $15 and free to University of Nevada, Reno students. Each performance will remain available on-demand with unlimited viewing for 14 days following the live event.

The 2020-21 Performing Arts Series is funded in part by the Associated Students of the University of Nevada, the Graduate Student Association, City of Reno Arts and Culture Commission, Nevada Humanities, the National Endowment for the Humanities, WESTAF (the Western States Arts Federation), the National Endowment for the Arts, the Nevada Arts Council, and IGT. In-kind support is provided by CLM Design, Advertising, Interactive.