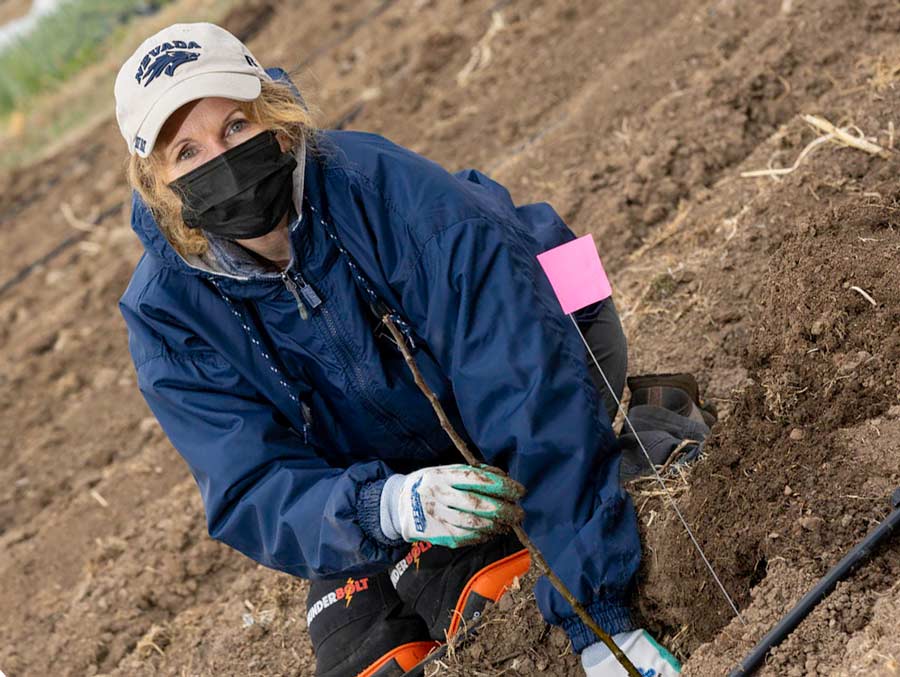 A half-acre organic apple orchard consisting of 127 semi-dwarf cider and table apples has been planted at the University's Valley Road Experiment Station, part of the University’s College of Agriculture, Biotechnology & Natural Resources. The orchard will serve many purposes, including identifying and propagating “antique” cider apples from Washoe Valley, as well as providing table apples for students. But to those who knew Jessica Younger Dickens, who passed away in March 2020, the Jessica Younger Dickens Memorial Orchard will provide a place to gather and reflect on the exceptional person she was, and a way to honor her memory. Shortly after she was diagnosed with brain cancer in 2017, she said she’s always wanted an edible garden on campus.

Jessica graduated from the University with a bachelor’s degree in business administration in 2003, and began working at the University’s School of Medicine in 2007, filling various roles until Thomas Schwenk became Dean of the School in 2011. She started as his executive assistant, but soon became Schwenk’s chief of staff.

Yani Dickens, Jessica’s widower and associate director of Counseling Services at the University, said that Jessica’s upbringing in a ranching and farming community, Alturas, California, made her grounded, and that much of her work ethic and desire to help people came from this upbringing.

“Jessica was a remarkably strong, wise and dedicated person, and she brought this to her work at the university,” he said. “Jessica's memorial orchard is intended to commemorate and reflect not only Jessica, but also her values. It was also important to her to make things better through her work, to do meaningful and impactful work, and to help the medical school thrive and become successful, not only its mission, but as a healthy place to work. It would truly delight Jessica to know that the fruit from the garden will feed students in need, while promoting appreciation for where our food comes from.”

The other 96 trees in the orchard are 12 “antique” cider apple varieties from Washoe Valley. William “Bill” Murphy-Sharp, co-owner of Tea House Gardens and emeritus faculty at the University, worked with various landowners in Washoe Valley to be able to take cuttings from the trees, some of which are more than 100 years old, and graft them onto two different rootstocks for the orchard planting. He is serving as a liaison between community apple enthusiasts and Assistant Professor Melinda Yerka, who will use the trees in plant breeding and genetics research. This research seeks to identify the varieties and their unique qualities, such as flavor and crispness. Some varieties may have never been identified or named before. The project will also evaluate other factors, such as how flavor is passed down across generations, and how texture and flavor are influenced by the environment. Finally, differences will be recorded on how the 12 varieties perform when grafted onto different rootstocks, including how the rootstock influences qualities such as drought tolerance, cold tolerance, productivity and flavor profile.

The Felix Gillet Institute in California will partner with Dr. Yerka and Mr. Murphy-Sharp not only to identify and study these antique varieties, but also to propagate them and preserve them for future generations by growing them, and then allowing others to take cuttings to graft and start their own trees. It seems a concept that Jessica would also embrace.