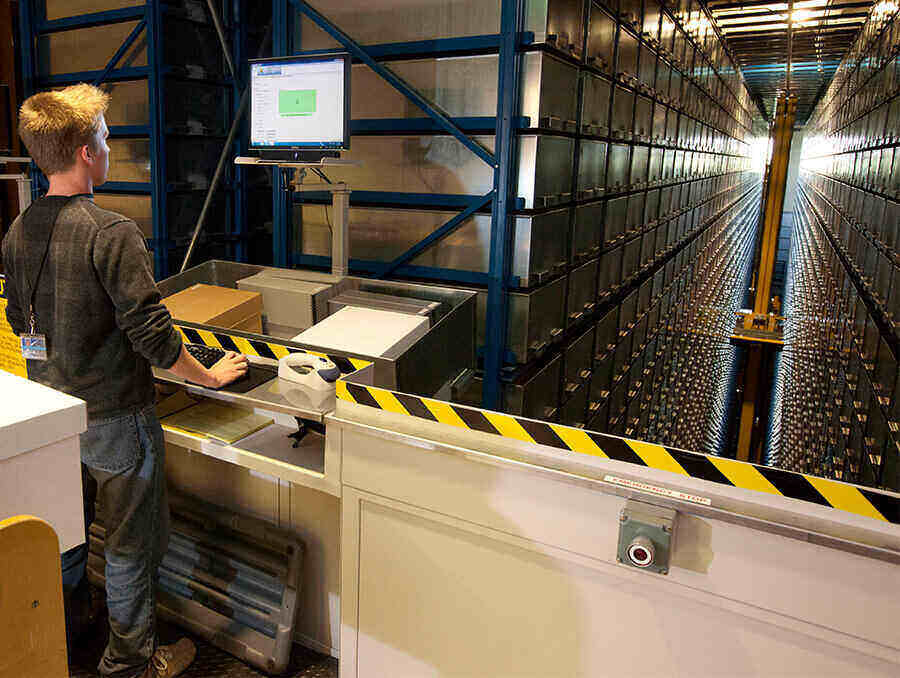 The University Libraries recently completed a major upgrade to the Mathewson-Automated Retrieval System (MARS). MARS is the three-story tall storage space located behind-the-scenes inside of the Mathewson-IGT Knowledge Center. It stores more than 800,000 items from the Libraries’ collection including books that have been checked out fewer than seven times in the last 20 years, journals older than one year, government documents, lendable technology such as laptops, cameras and other audio/visual equipment, items from Special Collections and University Archives, the DeLaMare Science and Engineering Library, Savitt Medical Library and more. The loss rate for items stored in MARS is less than one percent.

For context, the Knowledge Center has more than 500,000 items stored in the open stacks on floors three through five.

MARS requires one-seventh of the space needed for conventional shelving, and offers more floor space to Libraries users since lesser-used materials are stored within the system. It is a protected environment keeping materials safe and unexposed to humidity, temperature fluctuations, dust and other toxic materials. MARS contains six retrieval units, 17 workstations, more than 25,000 storage containers in a 13,000 square foot space. At the time of construction, MARS called for the largest continuous concrete pour in Northern Nevada history with more than 12 million pounds of concrete used to construct the storage space. The robotic arm that retrieves materials moves at 22 miles per hour when traversing the aisles.

“With components going out over the years due to wear and tear, the MARS upgrade project was needed in order to replace the ‘brains’ that operate the six robotic arms controlling the storage and retrieval machines,” Veronica Valencia, MARS and Stacks Maintenance Administrator said.

The upgrade project was needed to replace the main parts of the Programmable Logic Controller (PLC) found within MARS. The PLC controls six robotic arms that operate MARS’ storage and retrieval system. An engineering audit was also completed during the upgrade to ensure the entire system was up-to-date to help deliver faster and more reliable service to Libraries users. The upgrade was complete on January 21 and took approximately 28 weeks to finish.

“MARS is a major part of Libraries operations,” Valencia said. “It allows for great, flexible use of space within the Knowledge Center, because the Libraries can store so many different kinds of items in MARS. Building Operations staff have the flexibility to accommodate more patrons in the building – think extra furniture, collaboration spaces, conference rooms, auditoriums, white board space, and study tables.”

Those interested in watching MARS work are welcome to visit the second floor of the Knowledge Center. A virtual reality (VR) tour of MARS is available to Libraries users. The VR tour is set up next to the left of the Access Services Desk. The MARS VR tour was created by the Libraries’ @One multimedia team.