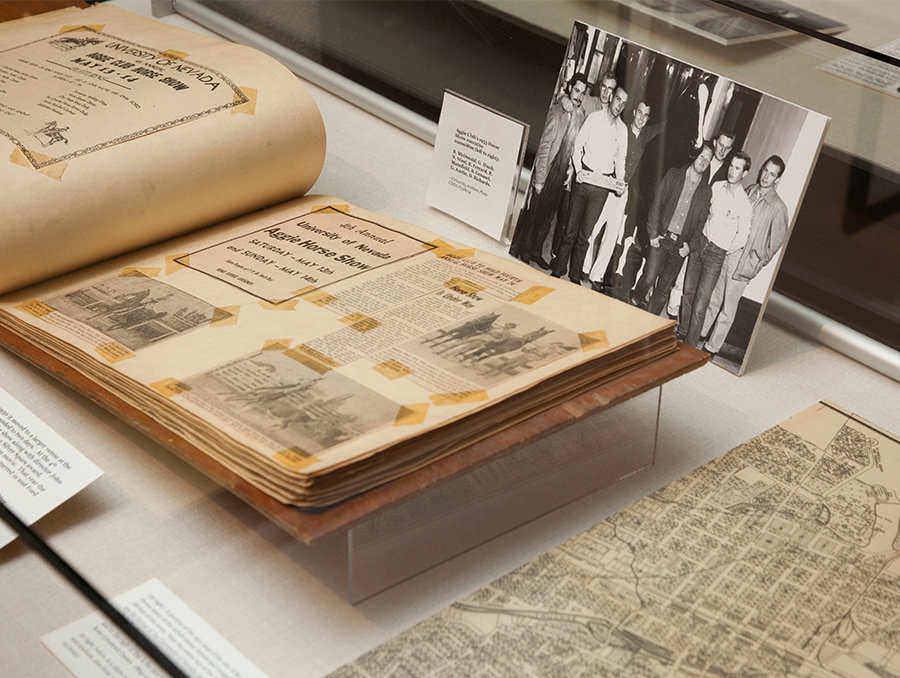 The Special Collections and University Archives department in the University of Nevada, Reno Libraries includes a growing set of collections focused on the environmental history of the Great Basin and Sierra Nevada regions. A notable addition in recent years is the collection of documents and photographs from the late Marjorie L. Sill, a lifelong environmental activist and member of the Sierra Club, Friends of the Nevada Wilderness, the Sierra Nevada Alliance, and other organizations. By the time of her death in late 2016 at the age of 92, she was known in local environmentalist circles as “Mother of the Nevada Wilderness.” She continued agitating for wilderness protection to the end of her long life.

Born and raised in California, Marjorie Leite married physicist Richard Sill after finishing her undergraduate studies at UC Berkeley. They both already took tremendous pleasure in outdoors excursions, hiking in the Snake Range and later in the Sierra Nevada, and joined the Sierra Club in their early twenties. The couple moved to Reno in 1959 for Richard to take up a job teaching at the University of Nevada, Reno, and Marjorie began a career teaching math and English at Sparks High School. In their off time, they continued exploring the outdoors in ecosystems so different from those of their respective childhoods in California and Nebraska.

The Sills joined the local chapter of the Sierra Club soon after arriving in Reno. In 1959, the Toiyabe Chapter was only three years old and still finding its feet. Richard jumped into leadership positions almost right away, but Marjorie Sill’s papers in the Special Collections and University Archives suggest a more measured approach to her involvement. She wrote a good deal for the chapter, from letters to the editor in local papers to opinion pieces and notes about Sierra Club “outings.” Surprisingly little of her personal, not-for-publication voice comes through in her collection of environmental records. We understand Marjorie Sill the activist from this collection better than Marjorie Sill the individual.

Marjorie’s activist legacy is indeed remarkable. Beyond the Sierra Club, she helped create the Sierra Nevada Alliance, Friends of the Nevada Wilderness, and the marvelously-named Great Old Broads for Wilderness. The extensive paper trail housed at the Special Collections and University Archives indicates a hard worker, interested in reviewing formal documents such as environmental impact statements, writing letters to representatives at the town, county, state, and national levels, and delivering testimony on behalf of her beloved wilderness. She had an especial care for those areas still relatively untouched, and the papers include a good deal of information about a series of roadless area surveys and the struggle to keep off-road vehicles out of them. The idea was to keep wild areas as wild as possible so that everyone could visit them and see what the land was like without much human presence.

Among Marjorie’s crowning achievements is Great Basin National Park, finally established in 1986. It is to this day the only national park in Nevada, known for Wheeler Peak, Wheeler Glacier, ancient stands of bristlecone pines, and the Lehman Caves. The Toiyabe Chapter of the Sierra Club was among those bodies for whom a national park in Nevada was a longstanding goal. Richard Sill had also advocated for it before his untimely death in 1981. Marjorie was able to call on decades of relationship-building with local authorities, wilderness organizations, and even members of Congress like Senator Harry Reid to accomplish the task.

The Marjorie Sill Papers in Special Collections and University Archives are a rich mine of information and documentation of the environmental movement in the inter-mountain west in the latter half of the 20th century. She collected information and expressed opinions on the MX Missile System, forest management, the delicate balance of riparian areas, endangered desert tortoises, roadless areas, and many, many more topics. The Special Collections and University Archives staff are proud to have this collection in their care and available for use.

The University Libraries embrace intellectual inquiry and innovation, nurture the production of new knowledge, and foster excellence in learning, teaching and research.  During each academic year, the Libraries welcomes more than 1.2 million visitors across its network of three libraries: the Mathewson-IGT Knowledge Center, the DeLaMare Science and Engineering Library and the Savitt Medical Library. Visitors checked-out more than 90,000 items and completed more than 2 million database searches.

Aida Guerrero, graduating with her BSW, dedicates her graduation to her young son who tragically passed away in August 2020.

While the community was on lockdown, Orvis School of Nursing students graduating May 2021 assisted on the front lines and overcame great personal tragedies in order to graduate.

Faces of the Pack: Life as a Ph.D. student during the pandemic

Three Ph.D. students in economics share why they chose the University, a high-level overview of their areas of research, and their hopes for the future

Simpson to continue research on climate adaptation and water management