University of Nevada, Reno genomics and microbiology research gives snapshot from March to June 2020 of SARS-CoV-2 and regional introduction of an unusual mutation 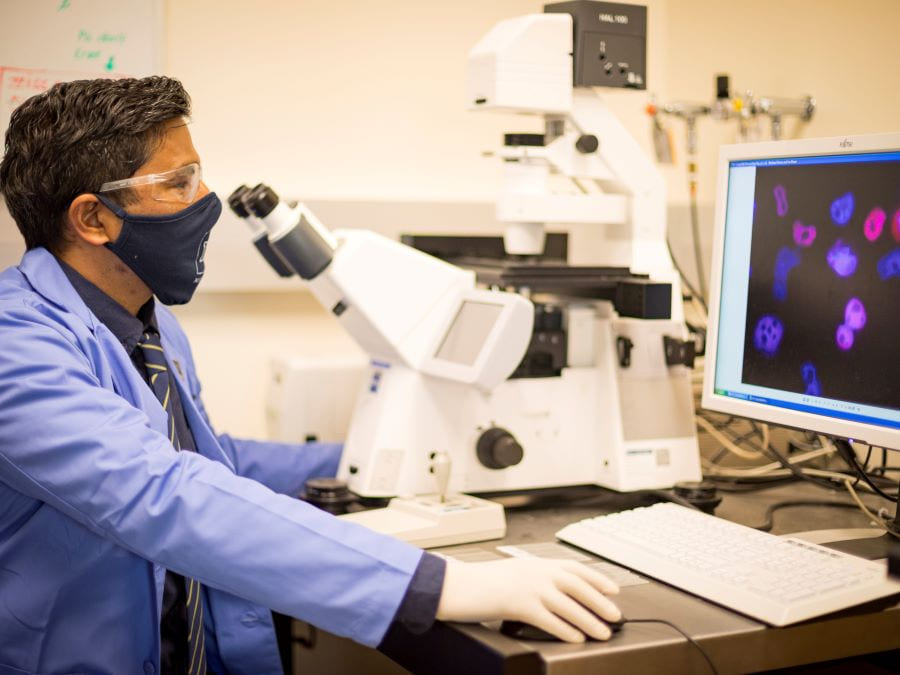 University of Nevada, Reno genomics and microbiology research gives snapshot from March to June 2020 of SARS-CoV-2 and regional introduction of an unusual mutation

A Nevada-based study of SARS-CoV-2, the novel coronavirus that causes COVID-19, indicates all major lineages (variants) of the virus worldwide are present in Nevada. Interestingly, the analysis shows some differences between the northern and southern parts of the state, with Southern Nevada presenting a virus snapshot similar to the rest of the country and Northern Nevada being dominated by one specific variant bearing a unique mutation in the gene needed for making its RNA copies. RNA viruses tend to accumulate mutations while circulating in human populations and SARS-CoV-2 is no exception. The majority of these mutational variations do not alter virulence of the viruses, but certain changes, such as the United Kingdom (B.1.1.7) and South African (B.1.351) variants, seem to have altered the transmission and infectivity of SARS-CoV-2.

The study by University of Nevada, Reno researchers has been published in the latest issue of the Journal of Genetics and Genomics. The study included genomic sequencing, large-scale data analysis and epidemiological study of 200 patient specimens, acquired through nasal/nasopharyngeal-swabs, from Northern and Southern Nevada that tested positive for the virus.

The samples were taken between March 6 and June 5, 2020, and this timing likely has implications for the differences between the northern and southern parts of the state. In Nevada, public events began to cancel in early March, nonessential businesses and services were ordered to close on March 17, and on April 1 closures were extended and Nevadans were urged to shelter-in-place. Less mobility of people between and within states resulted, and this likely contributed to the spread within a geographic area of viruses with specific genomic profiles.

“The biological relevance of this mutation is an area of continued investigation, but most likely it is not associated with any severity in disease,” said Cyprian Rossetto, Ph.D., a researcher in the University of Nevada, Reno School of Medicine’s Department of Microbiology and Immunology.

Overall, sequence analysis of 200 randomly selected patients’ samples “makes an important contribution to understanding ability of the virus to adapt as it continues through the human population,” said Mark Pandori, Ph.D., director of the Nevada State Public Health Laboratory at the University of Nevada, Reno School of Medicine and Nevada's Chief of Testing for COVID-19.  The Nevada State Public Health Laboratory detected and diagnosed the positive specimens analyzed in this study.

Of the 200 samples tested, 133 represented specimens from Northern Nevada and, of those, 62 specimens or 46% of the samples included this unique nucleotide mutation.

This unique mutation is a change of a single amino acid in the gene responsible for replicating the virus in the infected host cells. Rosetto and Subhash Verma, Ph.D., also a researcher in UNR Med’s Department of Microbiology and Immunology, said that preliminary studies do not point toward any noticeable change in the viral spread or infectivity of the virus with this mutation. Indeed, recent genomic analysis of SARS-CoV-2 circulating in Nevada showed only a limited number of virus with this mutation. This somewhat confirms that SARS-CoV-2 with this single amino acid change isn’t a variant of concern. However, a note of caution, this mutation has recently been documented in many other countries, although at lower frequencies and, as of March 1, 2021, there are approximately 800 virus submissions with this mutation at GISAID, an online, open-access repository tracking SARS-CoV-2 variants.

“Countries reporting this mutation include Australia, UK, France, Canada, Switzerland, India and Nigeria and ongoing genomic surveillance will provide information on the spread and prevalence of SARS-CoV-2 containing this mutation,” said Verma.

“Using molecular modeling, this particular mutation doesn’t seem to result in a structural change of the protein, thus may not cause any alteration in virulence,” explained Rossetto.

What the study does show, said Cyprian Rossetto, Ph.D. is that a “a particular viral isolate was able to enter the population, be transmitted within our community and the end result is a nucleotide variant found with higher frequency in Northern Nevada. It also shows the transmission dynamics of the stay-at-home orders.”

A convergence of expertise

The genomics sequencing and initial data analysis were completed through the University of Nevada,

Reno’s Nevada Genomics Center where Director Paul Hartley, Ph.D., used a novel methodology that allowed next-generation sequencing directly from the extracted patient sample. In some laboratories the virus must be cultured first to allow enough genomic material to be obtained for sequencing. The more direct laboratory technique that Hartley has developed utilizes a kit to amplify very low amounts of RNA, followed by enrichment of coronavirus-specific sequences to allow the sequencing of samples, including those with very low viral loads. This approach is robust for a range of nasal or oral swabs taken from patients.

Each of the researchers credits the convergence of expertise and resources at the University of Nevada, Reno as making the project possible. “It’s been a wonderful collaboration; an example of the total being more than the sum of the individuals,” said Rossetto. “Everyone on the team brings specific expertise on public health, virology, genomics and big data analysis, which makes us a complementary team to study this pandemic virus in great detail including mutational variation once the virus further circulates in the community. If Dr. Hartley hadn’t been able to optimize the sequencing as he had, we might not be at this place. We are working together through Zoom, yet we are connected by our close geographic location.”

The study received funding from Research & Innovation at the University of Nevada, Reno, the Department of Microbiology & Immunology at UNR School of Medicine and the Nevada IDeA Network of Biomedical Research Excellence.

The research team is continuing the study and genomic sequencing, now aided by enhanced instrumentation supported by the State of Nevada and facilitated by the facilitated by the Nevada Governor’s Office for Economic Development to advance research being conducted to understand and address COVID-19 in Nevada.

The full study, “Genomic surveillance of Nevada patients revealed prevalence of unique SARS-CoV-2 variants beariang mutations in the RdRp gene,” can be accessed at sciencedirect.com/science/article.

Note: Members of the research team contributed to the writing of this story.

Members of the lab teams led by Subhash Verma, Ph.D. (5th from right) and Cyprian Rossetto, Ph.D. (not pictured) conducting microbiology- and genomics-based research to unravel the COVID-19 picture in Nevada.