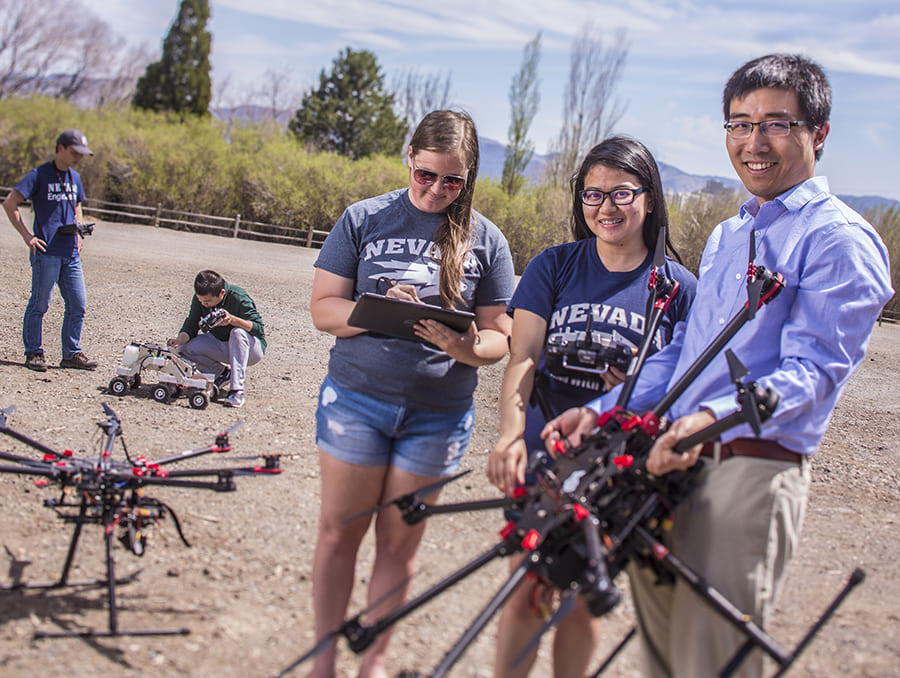 Modern computing power and the myriad devices it supports—from smart phones and electric vehicles to cutting-edge medical devices—is driven by advances in manufacturing sophisticated nano/micro-devices. The need for these faster, more powerful devices made from state-of-the-art materials has led to the proliferation of production facilities that require specialized techniques and coordination—aptly dubbed “advanced manufacturing.” The state of Nevada has seen tremendous growth in this industry. In Reno, for example, manufacturing has grown by more than 100 percent since 2010 and is expected to continue to grow.

The manufacturing performed in these facilities is increasingly automated—performed by machines working in coordination with one another, overseen by human operators. As a result, communication among these machines must be error-free and quick, and it must be able to convey large amounts of information. Unfortunately, existing communication methods have proven not to be up to the challenge. This is where the research in the lab of Department of Electrical and Biomedical Engineering Assistant Professor Hao Xu enters the picture.

While buffering issues and data loss are frustrations in the day-to-day lives of most people, in a factory setting, such disruptions could lead to slowdowns in production and, possibly, issues with quality control. When the devices being produced have medical applications, failure in quality control and slowed production times are unacceptable.

To address these communication issues, Xu is taking a two-pronged approach: Improving the communication methods directly, while introducing a decision-making process into the implementation of the information conveyed to reduce processing time. Xu’s solution begins with a reconfigurable intelligent surface (RIS) technique, which can reflect and, thereby, transmit communication signals much like a mirror might broadcast an image. The method embraces an “internet-of-things” approach in which all the related devices are connected and capable of coordinating efforts, but Xu’s introduction of artificial intelligence to inform decision-making reduces the clutter of direct communication among all of the connected devices.

"The question is how can we generate a new type of communication support system that allows for reliable, stable movement of information but that doesn’t result in latency issues associated with traditional wireless methods."

“The question is how can we generate a new type of communication support system that allows for reliable, stable movement of information but that doesn’t result in latency issues associated with traditional wireless methods,” Xu said. “For this, artificial intelligence is used to optimize the system. Machine learning itself is a promising technology, but it takes lots of time and lots of data to train. We are using game theory to reduce the time necessary for decision-making.”

To understand how this process works, consider the hierarchy of the U.S. Army, starting as it does with a squad of ten or eleven soldiers; four squads make up a platoon, and so on. A given platoon would then have 40 to 44 individuals. On the one hand, what happens to or near the first soldier may impact the decisions the forty-fourth soldier makes. On the other hand, if everything that happens to the first soldier has to be individually communicated to all other soldiers, while all the other platoon members are communicating their movements and statuses, the information exchange would become debilitating. Instead, salient anomalies within an individual squad are communicated to a staff sergeant, who then communicates with other designated leaders to determine how the information should affect strategy and movement. When functioning optimally, through this process, the information transmission is simplified, but all soldiers have the benefit of all available information.

Xu’s system mimics this kind of decision-making process. Within a factory setting, devices are placed into groups with leaders. The members of the group use a type of mean-field-game-theory-informed AI to make individual decisions for themselves, while a designated group leader feeds the information from its group into a separate cooperative-game-theory-driven AI to make decisions that are informed by the data gathered from other group leaders. Thus, individual devices in the system receive the benefit of interconnectivity without the detriment of bogged down communication and decision-making.

“This system allows for computational complexity while optimizing for finite-term decision-making,” Xu said. “And it is capable of handling a lot of emerging applications.”

For example, as vehicles become increasingly connected to a city’s transportation grid, they are also becoming connected to one another. Using Xu’s system, the individual vehicles would use the information available to them to make decisions about route and speed in their immediate vicinity, but they would also listen to designated group leaders that would be able to convey information that may be somewhat distant but impactful. Thus, although the individual vehicles on the east side of a town may not perceive issues with a route taking them to the west side of town, designated leaders would be able to communicate an unexpected disruption in traffic at a greater distance and send the west-bound vehicles on an alternate route.

In addition to providing solutions to communications challenges in advanced manufacturing facilities, Xu and his students are seeking ways to explore novel uses of unmanned aerial vehicles—known as UAVs or colloquially as drones. This spring, at the Institute of Electrical and Electronics Engineers (IEEE) IoT Week 2021 Student Design Competition for Networked Computing, Xu’s students Sanket Lokhande and Ian Lau presented research that will enhance the utility of drones in a project entitled “Intelligent Multi-User Millimeter-Wave MIMO Systems with Multiple Edge Computing Relays.”

Currently, many drones come equipped with high-powered cameras that can be used to monitor remote areas. In northern Nevada, this might mean monitoring for the early signs of a wildfire. This advanced notification could be the difference between a prompt response that saves lives and tragedy. However, there are two key limitations to this important monitoring method: 1) computing power and 2) discretion.

“UAV can take pictures and transmit them to a monitor, where they have to be downloaded and analyzed,” Xu said. “What my students are doing is equipping drones with edge computing, which includes an algorithm that will allow the drones to determine whether a photo it has just taken contains something of interest or not. If it does, it will then compress the image and transmit it. If it doesn’t, it will move on.”

In other words, if a drone is looking for signs of a nascent wildfire, instead of sending data-laden images from an unaffected area and repeating the process methodically and indiscriminately, it will instead save the time of processing and uploading images until it finds the wildfire. Further, by including technology that can compress images on board, the file delivery times are also reduced.

The research has potential application outside of assisting first responders in identifying potential issues.

“The UAV could also be used as a relay station,” Xu said. “At a big event, it could function as a hot spot for telecommunications. This role is currently performed by cars, but UAVs are easier to move, and with the computing power, they will be able to sense where a hotspot is. As the humans move, it will be able to adjust its location and find the best spot to act as a relay point.”

These projects only hint at the creativity and innovation in the Xu Lab. Learn more about the dynamic research Xu and his students are performing.