The recent discovery of the remains of 215 indigenous children, former boarding students of the Kamloops Indian Residential School, has sparked a bitter debate both within and beyond the borders of Canada 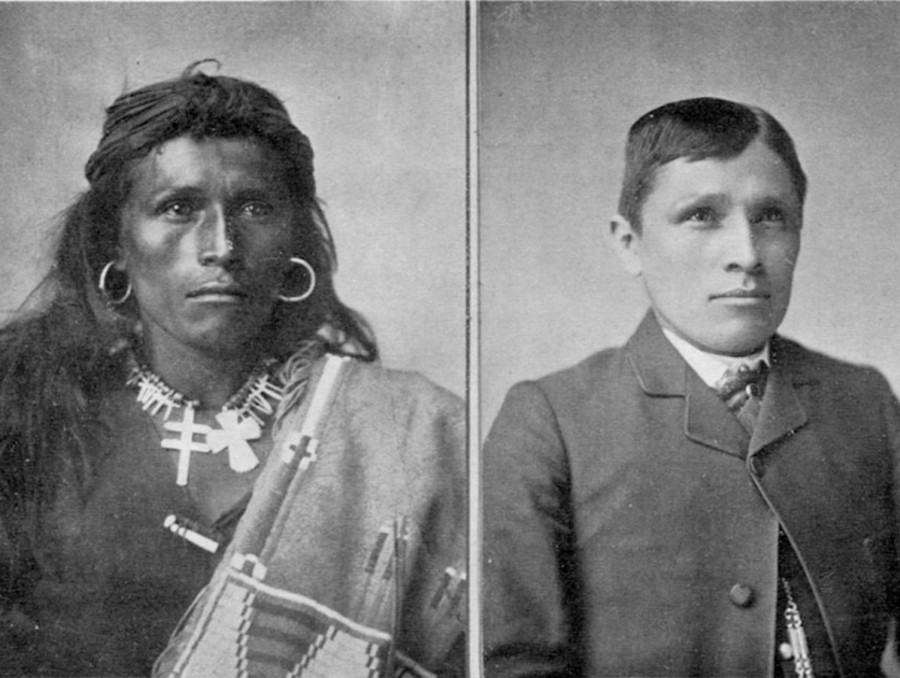 The recent discovery of the remains of 215 indigenous children, former boarding students of the Kamloops Indian Residential School, has sparked a bitter debate both within and beyond the borders of Canada

In October 2019, the Canadian government revealed the names of 2,800 victims of residential schools for Native American minors. Today there are already more than 1,100 nameless graves found in these boarding schools, but the debate continues, not bearing any fruit because no one wants to say the word. Unfortunately, this atrocity is but one of many chapters in a long history of repression and subjugation that today is more than 500 years old.

The warmongering policy was expensive and unproductive, while establishing a network of public boarding schools to which to forcibly drag every indigenous minor to was substantially cheaper and more effective.

On January 24, 1848, James W. Marshall found gold at Sutter's Mill, in the foothills of the Sierra Nevada, and this caused the outbreak of fever that dragged settlers from all corners of the world to what is now California. The massive arrival of these people caused a violent clash with the inhabitants of the area, the Native Americans, and gave rise to what have been improperly called the “Indian Wars”, which lasted well into the 20th century.

Under the slogan popularized by General Philip Sheridan, “the only good Indian is the dead Indian,” the toll on human lives in the wars against the native nations between 1848 and 1881 was horrific. The situation reached such a point that a preacher, Reverend Whitmer, took the matter to the United States Congress. According to Whitmer, the government had followed a “killing policy” regarding the “Indian problem” and he proposed a “peace policy”. He asked before the House how many Indian warriors had fallen in encounters with the United States Army. No one dared to answer. Maybe neither do we. We’ve all watched movies like Fort Apache, the 1948 western directed by John Ford and starring John Wayne and Henry Fonda. All of us who have seen these films of “cowboys and Indians” retain the recurring scene of a large group of “Indians” circling around a fence of wagons from which their enemies shoot at them… But the answer to Whitmer’s question surprised everyone: in almost 60 years of Indian wars, a total of about 4,000 indigenous warriors were killed, wounded, or taken prisoner. And the Union army had lost nearly 6,500 men. More specifically, concerning the Apache nation: Throughout that period, 566 warriors had fallen in battle.

Few warriors fallen? They all thought so. According to Whitmer, Commanding General of the Army William T. Sherman’s strategy had been “not only cruel but also costly.” According to the author, for forty years the United States government had spent an average of $10 million a year in wars against the “Indians” and just as much to keep them on reservations, spending a total of $20 million yearly (an insane amount of money in 1872). More precisely, between 1872 and 1882, the US government spent $223 million in wars, and $50 million more to supply the wars or an average of $27 million annually. And Whitmer declared: “At different times of late years, the Commissioner of Indian Affairs and the Secretary of the Interior have urged this peace policy, this educational plan, and the Government now spends $500,000 yearly upon it… It costs the Government $11,000,000 to kill an Indian. The Church can save him for $1,000!”. In short: the warmongering policy was expensive and unproductive, while establishing a network of public boarding schools to which to forcibly drag every indigenous minor to was substantially cheaper and more effective.

That is how Whitmer established his system of “Killing the Indian and saving the man” consisting of eliminating all that was indigenous in these minors and turning them into “civilized persons.” Whitmer’s system was not first formulated by him. In fact, it was one of the fathers of the public system of education, Bertrand Barère, a member of the Committee for Public Salvation during the reign of terror (and linguistic terror) in the revolutionary Paris of 1793. The system is an application of the Industrial Revolution principle of “chain production” to politics: the network of public schools would serve to produce “civilized” and “patriotic” citizens in chain.

The success of the system was supported by the figures. Thousands of schools sown the geography of countries on all continents. For example, here in Nevada, more than 30,000 students from more than 200 Native American nations studied at the Stewart Indian Boarding School in Carson City.

A genocide campaign does not just mean violent deaths or mass murder, it is more complex than that. According to Raphael Lemkin, who devised and coined the word “genocide”, genocide is “a coordinated plan of different actions aiming at the destruction of essential foundations of the life of national groups, with the aim of annihilating the groups themselves… The objectives of such a plan would be disintegration of the political and social institutions, of culture, language, national feelings, religion, and the economic existence of national groups, and the destruction of the personal security, liberty, health, dignity, and even the lives of the individuals belonging to such groups.”

The objective of the genocidal agent is not necessarily to kill as many people as possible belonging to a certain human group, but to destroy the “national pattern” of a nation (what has been called “culture” or more correctly “collective identity”) in order to impose on this group the national pattern of the agent: Genocide is cultural assimilation. In Lemkin’s own words: “Genocide is directed against the national group as an entity, and the actions involved are directed against individuals, not in their individual capacity, but as members of the national group.”

An important corollary of this definition is that a genocide campaign is never an isolated event, a concrete atrocity limited in time, but rather a complex historical process, composed and covered by a dense network of legal norms that guarantee the suppression of the collective victims and lasts for decades or even centuries.

Obviously, the assimilation of victims and the occupation of their territory can be achieved through the extermination of its people, whether through mass murder, concentration, or exile. But this is only one of the possibilities of the genocidal agent. The system of public education is often a more effective, quicker and, above all, cheaper mechanism to destroy the “national pattern” of a human group than physical extermination. The formation of a national historical narrative and the generation of symbols is, from this perspective, a fundamental task of genocide.

The word must be pronounced, “genocide”, and admit that it is a recurring phenomenon, current and in force.

The Kamloops Indian Residential School, run between 1899 and 1996 by the Catholic Church, is a chapter of this story. From approximately 1863 to 1998, more than 150,000 indigenous minors were taken from their families and placed in state boarding schools. They were not allowed to speak their language or practice any of their cultural expressions because that was precisely the function of these “schools of the human spirit.” At the same time, given that in the eyes of their teachers and Western civilization these minors were little more than “savages”, many of them were mistreated and died or were left to live with serious mental disorders.

The Truth and Reconciliation report, published in 2015 in Canada, fell short in stating that this policy with respect to the indigenous population amounted to “cultural genocide.” No, it was not “cultural genocide”, it was an episode of genocide, pure genocide. Anyone who reads pages 79 to 95 of Lemkin’s work Axis Rule in Occupied Europe (Washington, 1944) will see it.

The word must be pronounced, “genocide”, and admit that it is a recurring phenomenon, current and in force. An everyday reality for many people around the world.