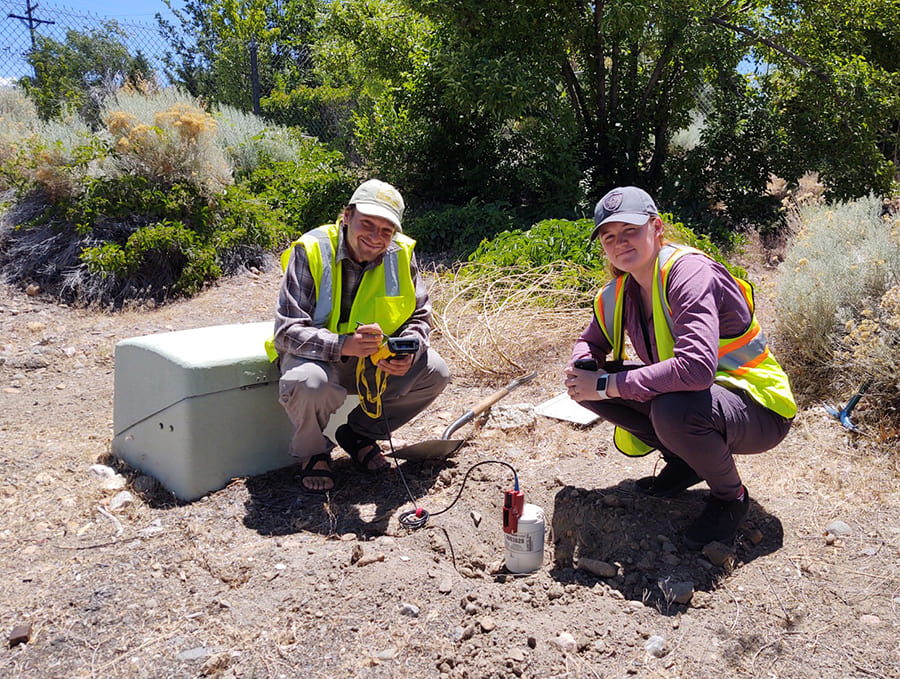 A team of scientists and engineers from the University of Nevada, Reno are installing earthquake sensors above ground along a six-mile stretch of an existing fiber-optic telecommunication cable buried under Reno to develop a rigorous and efficient system for subsurface imaging at the large scale, and detecting earthquakes using laser and fiber-optic technology.

"We'll be recording seismic signals generated by passing planes, trains and automobiles along the six-mile stretch of currently unused, buried optical fiber that runs west from Virginia Street along California Avenue and on to Mayberry Drive," Scott Tyler, professor of geological sciences and a leading expert in fiber-optic/laser sensing systems, said. "As the vibrations from the transportation system pass through the underlying geology, it causes a very small change in the optical fiber’s length, which can be recorded from the start of the fiber on South Virginia Street, using a laser-based system called Distributed Acoustic Sensing or DAS."

The team, led by Elnaz Seylabi, an assistant professor in the civil and environmental engineering department, is also installing three-component high-resolution seismometers along the cable in the study area to compare traditional methods with the new DAS technology that sends a pulse of laser light through the cable and measures the perturbations in the backscattered light from every point along the cable. The fiber optic system is sensitive enough to detect footsteps as well as jet airplanes that fly by.

"Instead of using thousands of geophones to measure ground vibration over several miles, we can use a single cable and collect similar information using the laser generator and recording system," Seylabi said.

The DAS system, on loan from Rice University for the study, will continuously monitor the change in the optical fiber length (known as strain or strain rate) down to changes in the length of less than 1 nanometer. For comparison, the thickness of human hair is about 50,000 nanometers.

By measuring how the strain changes in time and space along the buried cable starting at Virginia Street and continuing to the end of Mayberry Drive, the research team will be able to calculate the velocity structure in the subsurface, which is a critical factor in determining how the ground and civil infrastructure will respond to an earthquake at different parts of the western Truckee Meadows.

The section under study is part of a network of fiber optic cables operated by the Nevada System of Higher Education that stretches to the Sacramento area and has unused space that will be utilized for the experiment. The team of scientists and engineers is hoping to expand the study by connecting several systems that ring the community along the McCarran loop.

"In the long term, as we collect more data, we can improve our velocity and ground motion models in urban areas and therefore better understand the seismic risk and assess the resilience of our infrastructure," Seylabi said.

The technology ultimately may also be used in an early-warning system to alert communities before an earthquake may strike.

"If this proves successful, it opens an entirely new way to think about monitoring and designing for earthquakes and could even lead to using the nation’s telecommunication network as an enormous sensing platform to provide a nationwide earthquake early warning system, giving residents time to get to shelter before the shaking starts," Seylabi said.

Developing new approaches to model and understand earthquake hazard in urban areas like this is a major focus of the University's earth sciences and engineering departments as Nevada is the third most seismically active state behind California and Alaska.

Though Nevada has not had a magnitude 7.0 earthquake in 60 years, large earthquakes happen in Nevada, and officials encourage citizens to take steps to prepare for the potential for stronger ground shaking.

"The first 54 years of the 20th century we had seven earthquakes of magnitude 6.5 or larger and haven't had one since," Graham Kent, director of the Nevada Seismological Lab has said in past interviews. "We haven't had the big one since the Dixie Valley/Fairview Peak sequence in 1954 east of Fallon, which was two magnitude 7s four minutes apart. Since then, Nevada's population has grown 13-fold."